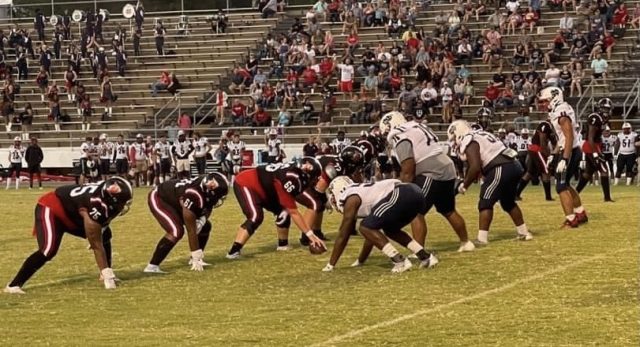 The Parkway Panthers jumped on the North DeSoto Griffins early and kept their foot on the gas en route to a 42-13 non-district victory Friday night in their home opener at Bobby Marlow Field at Preston Crownover Stadium.

Parkway Head Coach Coy Brotherton said it was important to get off to a good start and prevent North DeSoto (0-2) from doing so.

“They got off to a good start last week against Shreve,” he said. “They were up at halftime and that was one thing we wanted to do was not allow that to happen, and to try to get off to a faster start. Last week (a 45-14 win over Minden) I don’t think we did in the first quarter. We kind of stressed that all week. It’s kind of good to see the kids respond like that, offense and defense.”

For the second week in a row, the Parkway offense was virtually unstoppable.

Junior running back Jaylan White rushed for 205 yards on 20 carries and three touchdowns. His 73-yard TD run around left end in the second quarter gave the Panthers a 28-0 lead.

He also caught three passes for 116 yards, including a 95-yard touchdown. On the TD, quarterback Cannon Link was almost trapped near the goalline. But he was able to get the ball out to White who took care of the rest.

“He had a huge, monster game for us,” Brotherton said.

Link completed 14 of 19 passes for 194 yards and three touchdowns with no interceptions.

Ron Richmond rushed for 52 yards on nine carries. He also caught four passes for 40 yards and a touchdown. Derek Brown had five catches for 26 yards.

“They make play-calling easier,” Brotherton said with a laugh. “Ron Richmond had another big night tonight. We were able to throw a touchdown pass to our tight end, Jatavious Calhoun. We were able to do some scoring in different ways tonight so that was pretty good.”

The Panthers defense did its part again, too, picking off four passes. Jayden Hardy had two interceptions. Jayson Williams, seeing his first action of the season, had one as did Ashtin Jackson.

Parkway will look to go 3-0 when it hosts Huntington Friday. The Raiders (1-1) defeated Mansfield 40-20 Friday night.