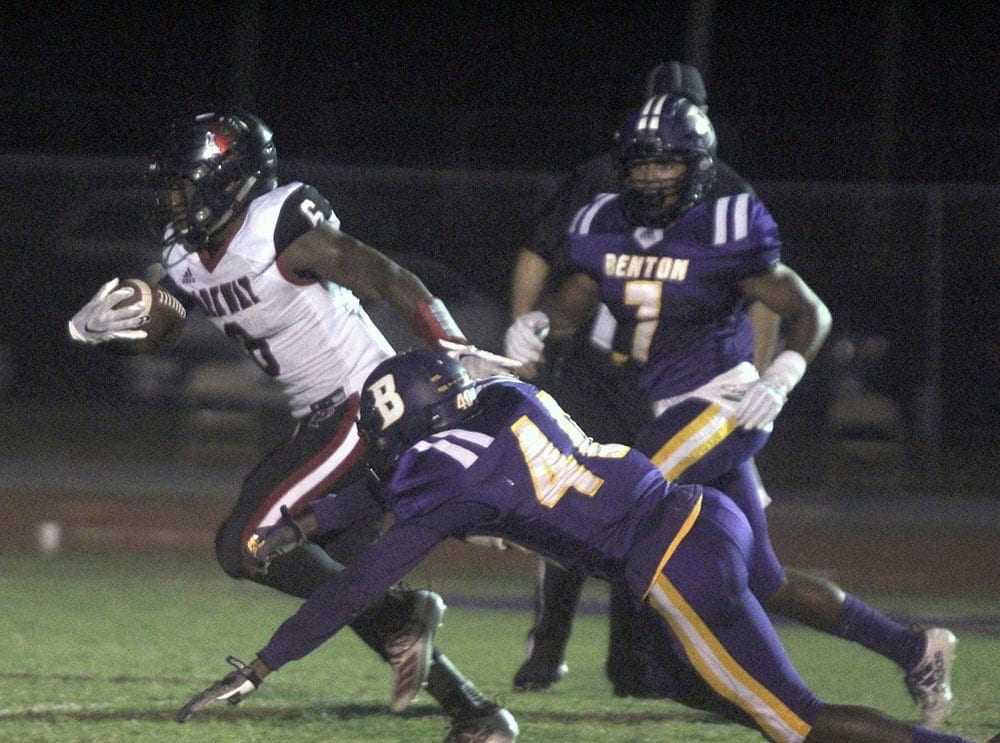 Like most games where two good teams combine for 75 points, Friday’s Parkway-Benton District 1-5A opener at Tiger Stadium had some twists and turns.

But it basically boiled down to one thing — Parkway’s running game.

Per Parkway stats, the Panthers amassed 442 rushing yards in a 49-26 victory.

Parkway junior Jamall Asberry had a phenomenal night, rushing for 273 yards on 33 carries. He scored four touchdowns on runs of 1, 10, 88 and 12 yards. If that wasn’t enough, he also caught a 10-yard TD pass from Gabe Larry.

Asberry’s backfield mate Rontavious Richmond also joined in the fun. He gained 128 yards on 12 carries and scored on a 41-yard run. He also caught a two-point conversion pass from Larry.

Both Asberry and Parkway head coach Neil May praised the play of the offensive line.

“Couldn’t be more proud of our offensive line,” May said. “They pushed Benton around, gave our backs holes to run through and our quarterback the time to throw it when we needed to.”

Said Asberry: “My offensive line, they opened a lot of holes. I didn’t have to use as much energy.”

Parkway improved to 3-1. Benton, playing its first district game as a member of the LHSAA’s highest class, is also 3-1. It was homecoming and the Benton side was packed.

Parkway was coming off a 42-0 loss to Alexandria. The Panthers had something to prove.

“We had a tough game last week,” May said. “We learned a lot about ourselves. We wanted to come out this week and respond. Couldn’t be more proud of my team, my coaching staff. We worked hard all week and we got better.”

Benton head coach Reynolds Moore said the Tigers were short-handed because of injuries. On Thursday, he found out another defensive starter wouldn’t be able to play because of an illness.

But he said those were just “all excuses” and he expected the substitutes to step up.

“I’m not saying my guys didn’t play hard or didn’t play well,” he said. “We just got outplayed. That’s the bottom line.”

Parkway put Benton in big early hole. Asberry’s 88-yard TD run up the middle through a large hole put the Panthers on top 35-13 with 3:49 left in the half.

Parkway also scored on a blocked punt recovered by Malik Cooper in the end zone early in the second quarter.

Benton linebacker Ashur Hall made a big play just before the half that kept the Tigers in the game. He tipped a pass in the right flat, made the interception and sprinted 71 yards to the end zone, breaking several tackles along the way.

That got Benton within 15 at the half.

Benton’s Cameron Barnett then took the second half kickoff and returned it 89 yards for a touchdown. But the PAT was no good and the Tigers still trailed 35-26.

Benton was soon in business again, recovering an onside kick at the Parkway 39. Three plays later, quarterback Clint Lasiter converted a fourth-and-4 with a 5-yard run.

Benton advanced to a first down at the 16. But on second-and-7, DeAngelo McCoy forced a fumble and Cooper recovered it.

With Asberry carrying eight times and Larry hitting a couple of passes, Parkway advanced to a first-and-goal at the 9. But Benton made a stand and took over at the 2, still trailing by just nine.

The Tigers moved to the 28 and completed a pass. Parkway’s Connor Norcross forced a fumble and the Panthers recovered at the Benton 44.

One play later, Richmond went around the left side for his 41-yard score. Nolan Dean’s PAT made it 42-26 with 35 seconds left in the third.

The Panthers controlled the fourth quarter.

“I didn’t feel like we ever got into a rhythm on offense,” Moore said. “We get a turnover and we give it back to them. We get a big play we fumble.”

Lasiter threw two touchdown passes in the first half. After Parkway took a 15-0 lead, he hit Artis Cole with a perfect deep pass for 70 yards. After Parkway went up 28-7, Barnett turned a swing pass into a 29-yard score.

Reed had four catches for 69 yards.

Norcross led the defense with 10 tackles.

Parkway plays Captain Shreve, one of the preseason 1-5A favorites, on Friday at Lee Hedges Stadium. The Gators (3-1, 1-0) defeated Southwood 57-7 Friday night.

Moore has been around awhile and he realizes injuries are a part of the game. But he didn’t expect it to be bad this soon.

“We knew running the gauntlet with a schedule like we have and going into this schedule where it gets even tougher it’s going to be tough,” he said. “We’re just depleted already before we got down to it and we weren’t expecting that.”

There was what looked like a serious injury in the first half that thankfully didn’t turn out that way. On the blocked punt, Benton punter Owen Wainscott went high in the air as he always does. He flipped and landed awkwardly on his right shoulder and the right side of his head.

The crowd went silent as Wainscott lay motionless face down for several minutes. But he soon started moving and walked off the field under his own power, much to the relief of every one in the stadium.

Wainscott, who also plays defense, was able to return to the game.