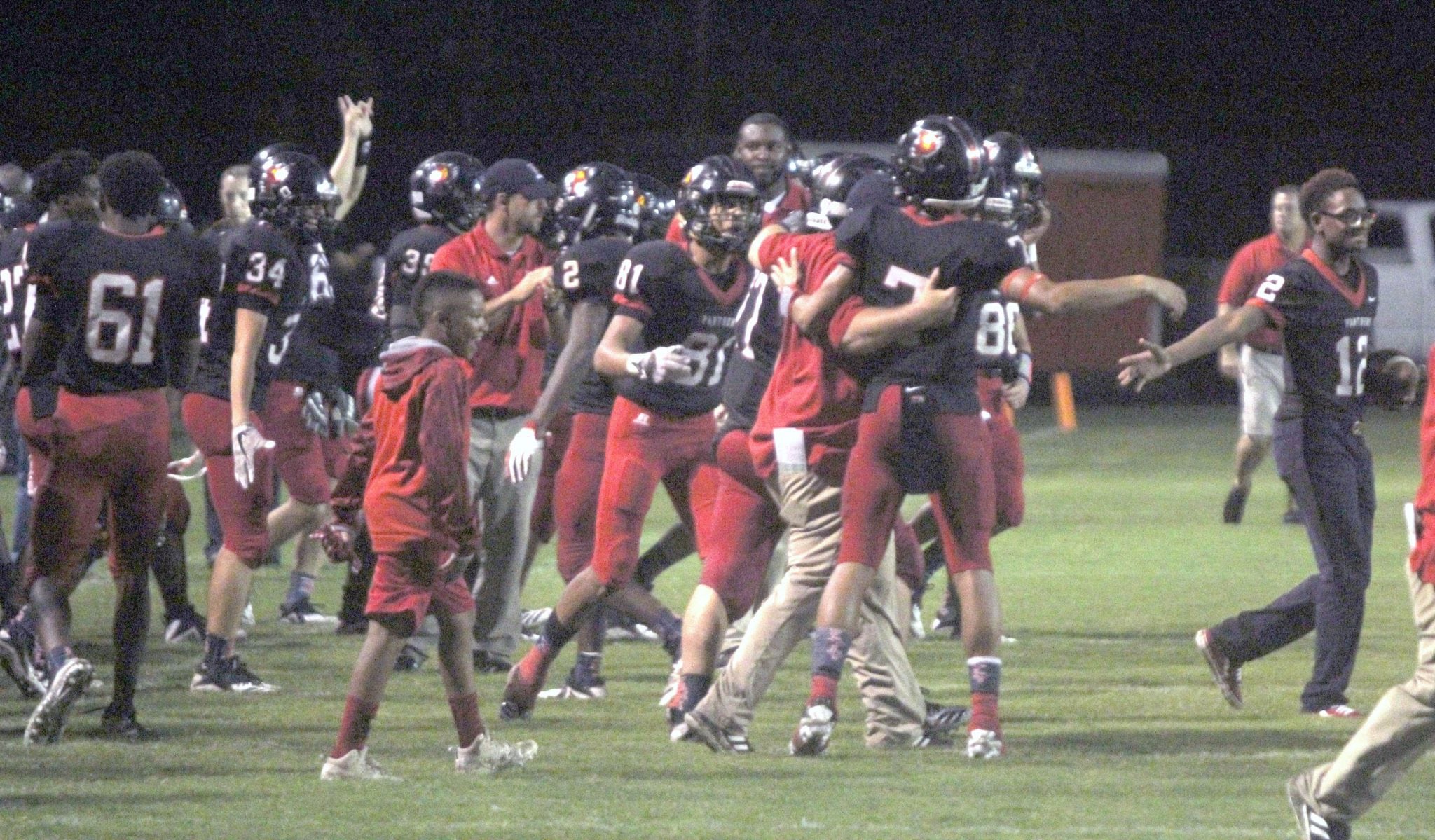 His 43-yard interception return for a touchdown with 2:52 left in the game gave Parkway a 30-14 lead. It was the first Pick Six of his career.

Morris said when he made the interception all he saw was “open grass.”

“Extremely special,” Morris said. “But I’ve got to go to next week. We play Evangel. We’ve got to be ready.”

That game Friday against the two-time defending District 1-5A champion Eagles will no doubt be a big one. But the victory over Pulaski will go down as one of the biggest in school history.

Pulaski (2-1), a private school in Little Rock, has won four straight Arkansas Class 5A state championships. During that span, the Bruins lost only two games.

Last year in Little Rock, in a game that was broadcast on national TV, Pulaski defeated Parkway 62-21. That came after star quarterback Justin Rogers and receiver Terrace Marshall suffered season-ending leg injuries in the first two weeks of the season.

“It was a motivational factor,” said Parkway coach Neil May, whose team improved to 2-0. “In December we sat down as a team and made a decision as what we wanted to do this season and this was one of those games that stood out. They caught us at our weakest moment last year. They caught us after two big injuries and we went up there on national TV and got embarrassed. And we just let that fuel our fire to work hard all offseason.”

While there was a well-deserved celebration following the game, the news wasn’t all good. Parkway senior quarterback Amani Larry was injured on a two-point conversion attempt after scoring his second touchdown midway through the third quarter.

According to a post by his mother Saturday on Facebook, Larry suffered a spiral break of his right fibula. He was replaced by his younger brother Gabe, a sophomore.

With last week off, the Panthers had two weeks to prepare for Pulaski. Kevin Kelley, the Bruins’ head coach, made national news a few years back for his strategy of never punting and always going for onside kicks.

“What we did the last two weeks is we treated every day like we were preparing for Pulaski,” May said. “We didn’t take a day off. We didn’t take Labor Day off. We worked on that day. We tried to keep things as normal as possible and we wanted to just keep working every day and get ready for Pulaski. And it gave us some time to heal up. We had a couple of ankle sprains.”

The Panthers recovered every Bruins onside kick Friday night. Alijah Barnett returned one to the Pulaski 7, setting up Amani Larry’s second touchdown run which gave the Panthers a 13-8 lead in the third quarter.

Barnett also recovered the onside kick after the Bruins cut the lead to 30-22 with 1:48 left.

Pulaski kept the suspense alive, forcing a punt. The Bruins had used their last time out after third down, and the Panthers let the clock tick down to 49 seconds before punting from the Pulaski 42.

Mark Green’s punt was downed at the 9. One incompletion later, Isaiah Robinson intercepted a Braden Bratcher pass with 40 seconds left. Larry knelt down twice and the celebration was on.

According to Parkway’s stats, Pulaski had 443 total yards, more than double Parkway’s. Bratcher, who came into the game with more than 700 yards and nine TD passes with only one interception in two games, completed 21 of 45 for 247 yards. The Bruins also rushed for 196.

But the Panthers defense made the plays it took the win the game.

Pulaski had 12 possessions. Victor Clark forced a fumble recovered by Ted Nelams on the first. Five other drives ended with incomplete passes. One was ended by the half. Two ended with Parkway interceptions.

“I cannot say enough about our defense and how hard those kids played,” May said. “They were so tired (at the end). They kept playing hard. We’ve got a bunch of seniors on that defense that just don’t have quit in them. Our defensive coordinator coach (Justin) Hadwin, he and our defensive staff worked hard every day making fighters out of those kids. I’m so proud of them.”

After Pulaski’s third possession ended on a fourth-and-19 incompletion, the Panthers drove 60 yards for a TD all on the ground. Caleb Shearin, Jamall Asberry, Clark and Amani Larry all had carries with Larry scoring from 8 yards out on fourth-and-5.

One Pulaski’s fourth possession, Nelams had a sack for a 4-yard loss on third-and-10. The drive ended at the Parkway 23 with an incomplete pass on the next play.

Nelams led the Panthers with eight solo tackles and three assists, according to Parkway stats. Morris had four solos and six assists. Alexavier Mitchell was in on eight tackles. Robinson and Kaybien Smallwood were in on seven. Clark was in on six, Codie Bickel four and Adam Johnson three.

Parkway took the lead for good on a 24-yard Luis Espino field goal early in the fourth quarter. Asberry, Barnett and Carson Sanders had key runs on 42-yard drive. The field goal came after the Bruins scored to take the 14-13 lead.

Asberry, a sophomore, led Parkway with 79 yards rushing on 23 attempts. Barnett had 32 on nine. The Larry Brothers combined to completed four of seven passes for 54 yards. Rayshion Cook had three catches for 48 yards, including a 19-yarder.

Now it’s on to Evangel for the Panthers. The Eagles, who were scheduled to play Duncanville, Texas, Saturday evening, have started the year 0-2. Last year, the Eagles won 52-0.