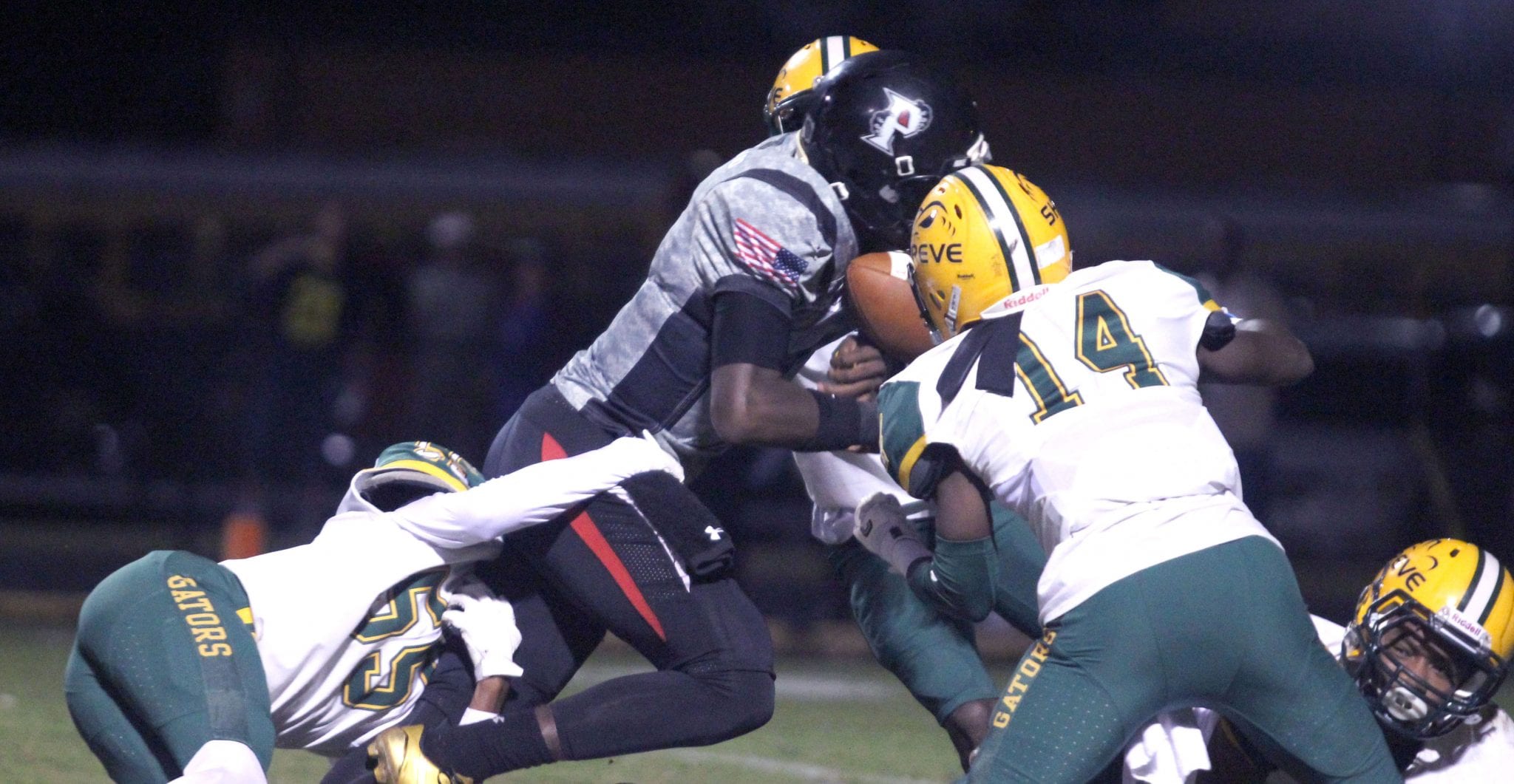 The Parkway Panthers’ Class 5A first-round playoff game against the Captain Shreve Gators Friday night at Preston Crownover Stadium was a lot like the teams’ district meeting.

The Gators got off to a good start and took the lead. But once the Panthers got going, there was no stopping them.

Parkway defeated Shreve 49-23 in Week 6 after the Gators jumped out to an early lead.

Shreve scored the game’s first touchdown on its second possession, converting a fourth-and-7 along the way. The Gators scored on a Lucas Grubb TD pass on fourth-and-goal from the 4.

The Panthers answered quickly after recovering an onside kick. Justin Rogers hit Terrace Marshall Jr. streaking down the Parkway sideline for 45 yards to the Shreve 10. On the next play, Eric “EJ” Williams went around left end for the first of his three touchdowns. Chase Hill’s PAT tied it at 7 with 4:11 left in the first quarter.

Williams’ TD was the first of 53 straight Parkway points. The Gators didn’t score again until a fumble return in the third quarter with the Panthers on top 53-7.

Shreve didn’t leave anything on the field. Taking a page from Parkway coach David Feaster’s playbook, the Gators went for it on fourth down several times. But after the first drive the Panthers defense was up to the task, giving the offense great field position.

On offense, the Panthers took what the Gators gave them. Rogers attempted just 11 passes but he completed eight for 165 yards and two touchdowns. He also had a spectacular 49-yard, tackle-breaking run, adding about 10 yards at the end with a couple of Gators draped on his back.

Marshall caught five passes for 128 yards, including a 55-yard score. He also had a touchdown called back as did Shreve.

Robert McKnight did most of his work blocking, but he did catch a 37-yard touchdown pass. He also scored on a 1-yard run.

Williams rushed for 72 yards on just six carries. His other two TDs covered 1 and 3 yards. He set up one of his TDs with a 38-yard run.

Kendal Brown picked up an attempted onside kick at the start of the second half and raced 49 yards for a touchdown. Derrick Mitchell scored on a 67-yard reverse.

Malcolm Banks set up a touchdown with an interception return to the 1. Johnathan Jones picked off a pass in the second half to stop a promising Shreve drive.

According to Parkway stats, Brown was in on 11 tackles and David Morales 10. Stoney Butler was in on eight, Banks seven and Cordarius Moore six. Nick So’oto and Trace Schmid were in on five.

Kameren Ashley was in on four tackles and knocked away two passes.