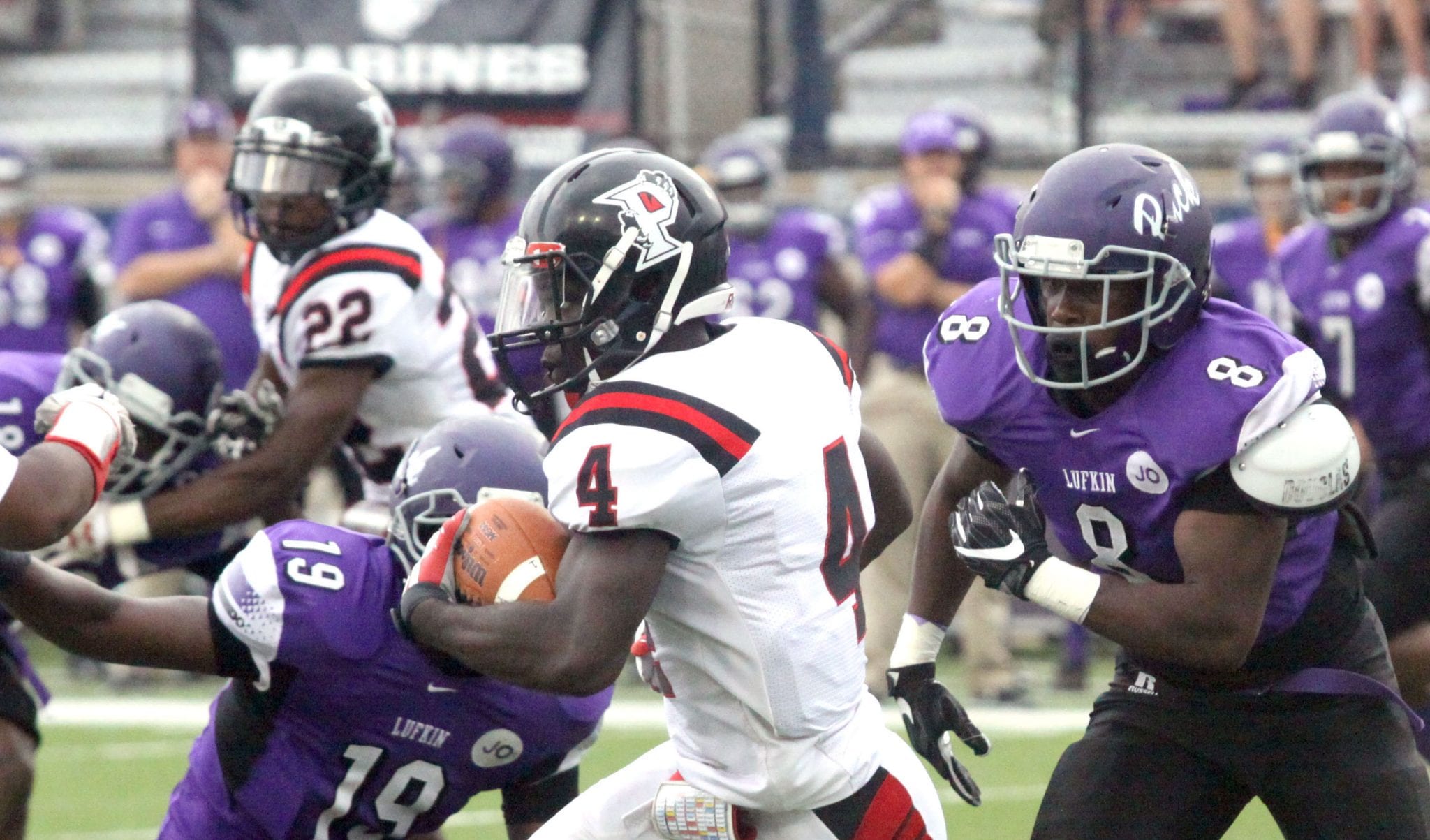 In a game with more than 1,400 yards total offense, some big defensive plays helped the Parkway Panthers defeat the Lufkin, Texas, Panthers 69-54 in the Landers Dodge Battle on the Border on Saturday at Independence Stadium.

In the second quarter, Johnathan Jones tipped and then intercepted a pass lying on his back at the Parkway 1. On the next play, Robert McKnight set a school record that will never be broken, running 99 yards up the middle for a touchdown.

That gave Parkway a 28-21 lead. And even though the game was close all the way, Parkway stayed in front the rest of the game.

With about eight minutes left in the game and Parkway leading 63-54, Jones made a diving interception at the Lufkin 35. Three plays later McKnight scored his third touchdown of the game on a 29-yard run.

The issue was finally decided when Cordarious Moore sacked Kordell Rogers on fourth and 8 at the Lufkin 43. Parkway was able to run out the clock.

“We felt like if we could ever stop them one time then we had a chance,” Parkway coach David Feaster said. “We felt like we couldn’t punt the ball ever. We didn’t know if we could stop them because they’re so good. So we’ve got a lot of respect for Lufkin beforehand and after the game. I’m very proud of the way our guys played and fought through that whole thing.”

“They played with a bunch of class,” Feaster said of Lufkin. “They never got frustrated. They didn’t want to come over here and get beat. None of their kids got frustrated. Very impressed with Lufkin. They’re going to have a great year.”

The offensive numbers in Saturday’s game were astounding. According to Parkway stats, the Panthers ran 79 plays and gained 826 yards. Lufkin ran 80 plays for 615 yards. Parkway scored 35 points in the first half and 34 in the second. Lufkin scored 27 in both halves.

“Early in the fourth quarter, I was saying somebody’s about to cramp up,” Feaster said. “Either some of our studs or some of their studs have to get tired. They never did.

“I thought we had an advantage there. Obviously we’ve got Terrace Marshall. We’ve got Robert McKnight and we have a lot of other guys too that can go. Nobody went down. They just kept going through. It was an amazing game.”

Feaster said he didn’t leave too many plays in the playbook. Every game is important because of power rating points that determine playoff seedings and home-field advantage. Parkway lost to eventual 5A state champ Zachary on the road in last year’s 5A semifinals.

“We had it loaded,” he said. “We saw the film. We knew they were good. It’s so important to play the semifinal game at home. Anything we could possibly come up with we had it loaded, but no, we didn’t spend it all. There’s some more.”

Parkway junior quarterback Justin Rogers completed 24 of 36 passes for 388 yards and five touchdowns. He also ran 10 times for 30 yards. Rogers had a big two-point conversion run in the second half that allowed Parkway to maintain a two-score cushion.

Junior wide receiver Marshall showed why he’s considered the top receiver in the nation by several recruiting websites in the Class of 2018. He caught seven passes for 233 yards and four touchdowns.

One of those was from EJ Williams on an option 46-yard option pass in the fourth quarter. The other three covered 37, 54 and 73 yards.

McKnight finished with 225 yards on 11 carries and three touchdowns. He also caught seven passes for 83 yards.

Chase Hill also had a great game. He scored on 35-yard run and caught a 5-yard touchdown pass with 20 seconds left in the first half. Parkway took a 35-27 lead into the lockerroom.

Hill also made seven of nine extra-point kicks. One of his misses was after Parkway’s final TD.

In addition to throwing a TD pass, Williams scored on a 9-yard pass from Rogers on Parkway’s opening drive of the game. He finished with seven catches for 68 yards.

As good as Parkway’s offense was, Lufkin almost matched it. Kordell Rogers competed 27 of 37 passes for 354 yards and three touchdowns. He also gave the Parkway defense fits with his scrambling ability.

“I don’t think our defensive guys liked it much,” Feaster of the game’s offensive explosion. “I know our defensive coaches didn’t enjoy it. But we take it as a challenge. It’s awesome to be 2-0 and OK, now let’s go get better. We know we’re going to get better. We’ve got the right guys on defense. We’ve got the right coaches. We’re up against a really good team, and we’re going to play some really good teams in the playoffs if we get to that. So we know we’ve got to get better.”

Lufkin got within 49-47 with 2:08 left in the third quarter, but the Panthers stopped the two-point conversion attempt. Parkway got the nine-point cushion back at 56-47 on Marshall’s 73-yard TD catch.