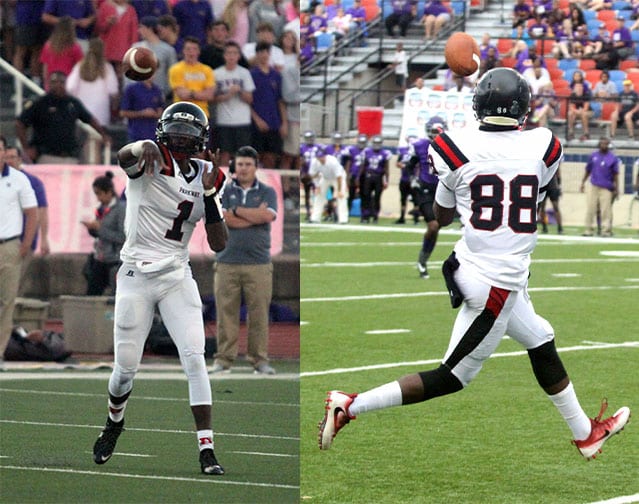 Parkway receiver Terrace Marshall Jr. and quarterback Justin Rogers both turned in impressive performances in The Opening Regional in New Orleans on Sunday.

Marshall and Rogers, who will be seniors this fall, were named MVPs at their respective positions.

Marshall was invited to The Opening Finals to be held at Nike World Headquarters in Beaverton, Ore., in late June or early July. Rogers was invited to the Elite 11 quarterbacks competition in June in Los Angeles.

The Opening, presented by Nike, is for the nation’s elite high school football recruits.

According to its website, The Opening Finals includes the ”top 166 high school football players in the nation a selected by Student Sports after film evaluation and/or in-person evaluation at one of The Opening Regionals or Rating Days.

“The Opening Finals presented by Nike Football is four days of dynamic training, coaching and competition for the country’s most elite high school football players. Every position and every aspect of the game will be highlighted over the course of the three-day program.”

The Elite 11 is includes three days of “advanced, one-on-one quarterback instruction in a high competitive setting,” according to its website.

The top 11 quarterbacks will receive invitations to The Opening Finals.

Barton Simmons of 247Sports.com tapped Marshall as the top performer at the New Orleans regional.

“Terrace Marshall checked all the boxes,” Simmons said in a post on 247Sports.com “I knew he was big, knew he was a polished route-runner and sure-handed. He reinforced all of those traits on Sunday. But he added some new items to his toolbox by showing off 4.5 speed in the 40-yard dash, one of the fastest times of the day. He also competed every rep, fought for more reps and was a rare high-level prospect that was battling like he had something to prove.”

Rogers completed 182 of 288 passes for 3,022 yards and 30 touchdowns with eight interceptions.

“One of two quarterbacks to earn an invite to The Opening Finals, Rogers showcased a big-time arm, accuracy and outstanding anticipation and timing throughout the afternoon,” Simmons wrote in his post.

Marshall and Rogers have both received offers from most of the nation’s top college programs.