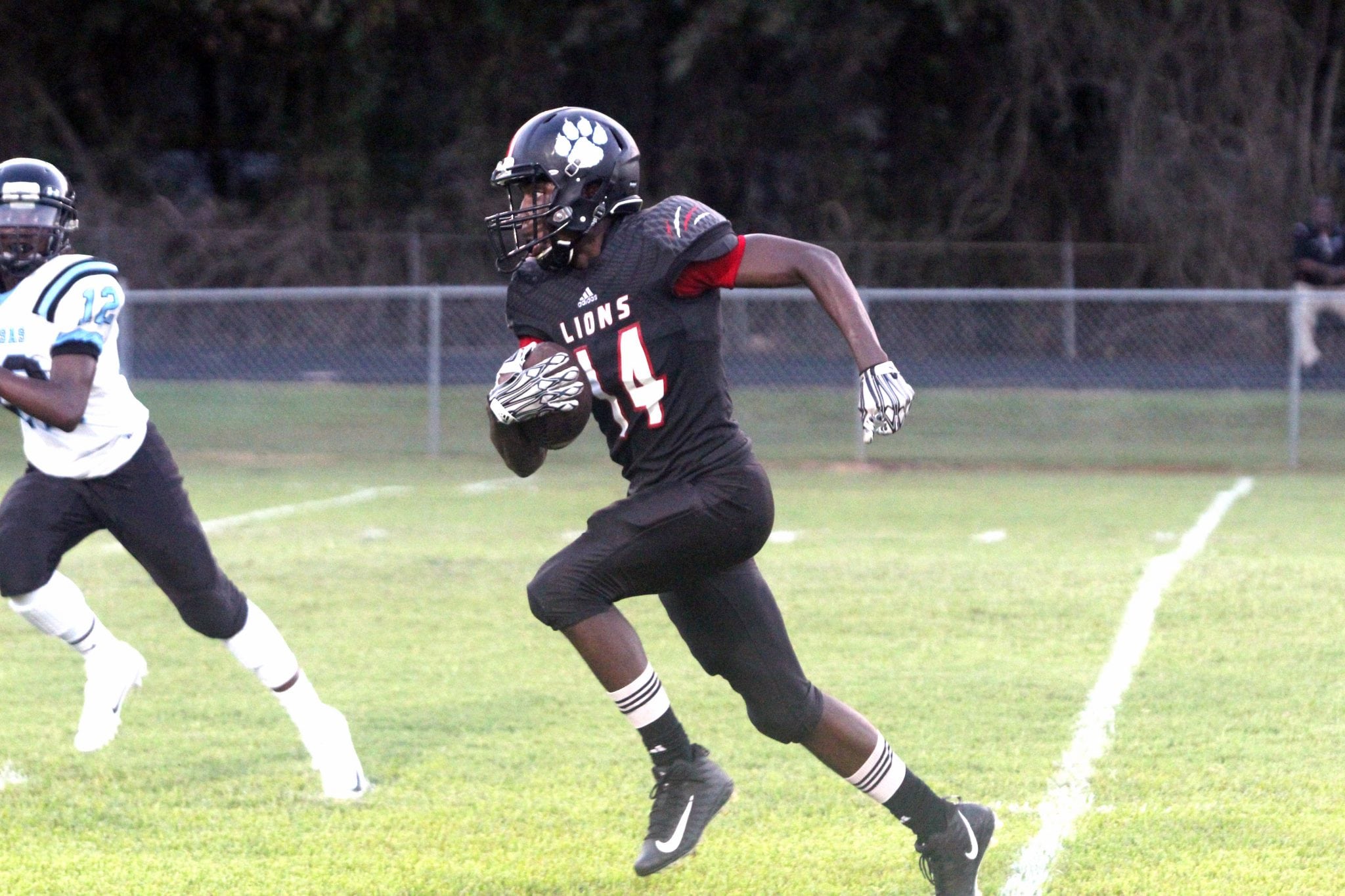 It took only one play for the Plain Dealing Lions to assert their dominance against the Tensas Panthers on Thursday night in Plain Dealing.

On their first offensive play, the line opened a big hole for running back TJ McCauley. The result was a signficant gain. A few players later, Ladavious Scott went 12 yards for the season’s first touchdown with barely a minute gone in the contest.

Scott led the Lions with 98 yards rushing on 12 carries. McCauley also had a big night, gaining 90 yards on 16 carries. He scored two two-point conversions and ran hard throughout the game, picking up many of his yards after being hit.

“It’s good to open with a win, because when you open with a loss it’s hard to dig out of it sometimes,” Plain Dealing coach James Thurman said.

The Lions lined up in a tight formation for much of the game and got big yardage up the middle on the ground behind a strong push by the line. But as Tensas loaded up to stop the run, senior quarterback Artavious Washington-Carper was able to hit junior Ladarious O’Neal twice for touchdowns of 26 and 29 yards in the first half.

The second TD pass made it 22-0 early in the second quarter and that was the score at the half.

“We kind of changed some of our personnel up, got some of our big guys where they’re not going both ways full time, get a good rotation,” Thurman said. “The offensive line really played hard. They kind of packed the box on us early on so we were able to hit them with two touchdown passes. That was great that our quarterback was able to put the ball where he needed to and Ladarious O’Neal was able to take it to the end zone.”

Plain Dealing increased its lead to 28-0 early in the third quarter on an 8-yard run by Washington-Carper. The Lions took over at the Tensas 20 after the Jaguars punter, under a heavy rush, was unable to get the kick off.

Plain Dealing added a final touchdown in the fourth quarter. Inside the Panthers 5, Washington-Carper fumbled the snap and lineman RJ Bragg picked it up and ran it in. Dezmond Player scored the two-point conversion.

The Panthers hurt themselves with numerous short snaps out of the shotgun formation. The Lions recovered one of those and took advantage of the others by making life miserable for Tensas quarterback Kedrick Giles, who took several hard hits.

“I felt like we got to their quarterback real well,” Thurman said. “We were getting some pressure on them. We had some guys that were coming pretty hard. The center was having to get the ball off and get a block right there. I think he was snapping it low a little bit and the quarterback was kind of getting in a little hurry.

“We hit No. 2 (Giles) pretty hard and he had to go out for a little while and that probably paid off for us. He’s their best player. He’s a heckuva athlete. So any time he was on the bench taking a break it really helped us out on defense.”

Overall, it was a satisfying win for Thurman, whose team ended last season on a seven-game losing streak. The Lions lost only one fumble and had only one penalty that was really costly.