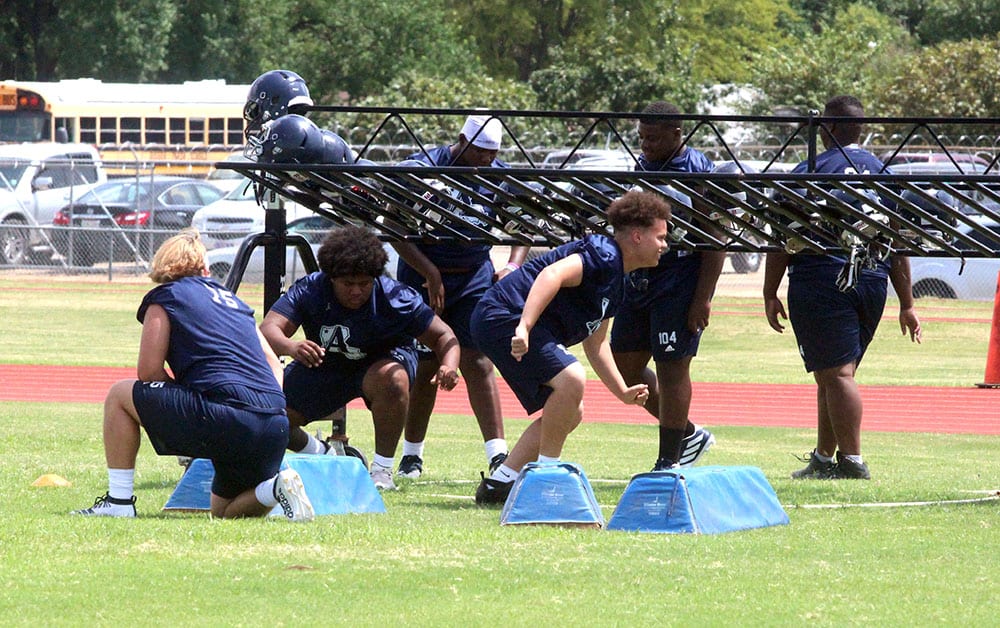 It’s the middle of August and that can mean only one thing. High school football practice is underway.

According to the LHSAA calendar, the first official day of practice was Monday.
But most teams around the state started last week. With school starting, Bossier Parish teams began practicing after school. Under LHSAA rules, players are only allowed to wear shorts, t-shirts and helmets during practice until Thursday, the first day full gear can be worn.

Players and coaches were greeted by temperatures that hovered around 100. Temperatures remained that high in the afternoon to first two days of this week before moderating to the mid-90s thanks to some clouds and rain. But as the temperature went down, the humidity went up.

Of course, the players spent the summer working out, lifting weights and playing 7-on-7 games. Some also divided their time with other sports. So while it may have been hotter than it was in June and July, the heat is nothing new to them.

The first weeks of practice are just another step in the process of preparing for season opening games on Sept. 6.

Scrimmages are scheduled for Aug. 22 and 23. The annual Bossier Parish Lions Club Jamboree is Aug. 30 at M.D. Ray Field at Airline Stadium.

Benton head coach Reynolds Moore had a busy summer. In addition to conducting workouts, he and his staff had to make the move to the new Benton High.

For at least a few more weeks, the Tigers will be practicing at the old school because the field at the new one isn’t quite ready for the wear and tear.
Regardless, Moore, in his seventh season at Benton, is excited another season is almost here.

“Every time fall rolls around nobody wants to go back to school really, but it’s time to play football and that kind of gets everybody motivated for us, for our coaches and players,” he said at Benton’s picture day last week.
Benton has moved up to District 1-5A, joining Airline, Haughton and Parkway. Benton and Airline will meet on the football field for the first time on Nov. 1 at Tiger Stadium.

“Not only is it going to be competitive, but it’s going to be so much fun to have four parish schools in there along with Byrd and Shreve who are longtime opponents,” he said “It’s going to be exciting. As a fan, it couldn’t be any better. Every Friday night is going to be fun to watch.”