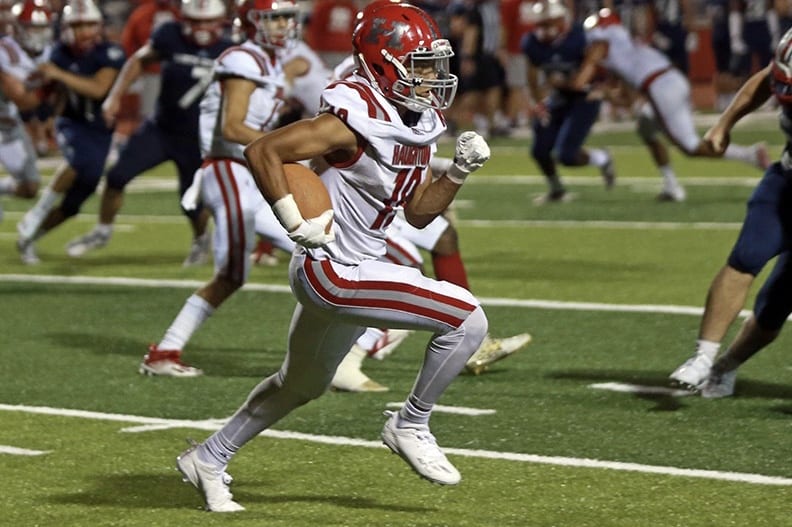 On one hand, there was Benton’s Reynolds Moore, who could find little fault with his Tigers in their scrimmage against North Webster.

On the other, there was Bossier’s Michael Concilio, who had a hard time finding any positives in his Bearkats’ scrimmage against Red River.

The other parish coaches fell somewhere in between, seeing bright spots along with areas that need work.

Normally, teams would have the parish jamboree to tweak things leading into season openers. But because of COVID-19, there won’t be one.

From the looks of things, Moore’s Tigers are more than ready. Benton dominated North Webster, outscoring the Knights 33-0 in two live 12-minute quarters that concluded their scrimmage Friday at Tiger Stadium.

“It went well,” Moore said. “I think our defense was what we thought it would be and that’s a big deal to live up to what our expectations were for them.

“I thought both quarterbacks (Gray Walters and Caleb Hood) played really well. We ran the ball really well. Our receivers were involved in the action so I was really pleased with that. Not a whole lot to really complain about honestly. The kids got after it.”

Moore said North Webster’s offense didn’t make it past their own 40 in the two quarters.

Pearce Russell caught two touchdown passes and Dane Stearns grabbed one. Jastin Johnson ran for a score. RJ Moore, the coach’s son, kicked a field goal. The Tigers even got a safety on a punt snap out of the end zone.

“RJ had a real good night kicking the ball,” Moore said. “He kicked off deep the entire night. The kickoff coverage team did a great job containing them. It was a dominant effort by the defense. I don’t even know if they got a first down, maybe one or so.”

Benton returns to Tiger Stadium on Friday to face Huntington.

Airline went on the road Friday to face Alexandria Senior High. Both teams are coming off outstanding seasons and have high expectations this season.

Airline head coach Bo Meeks said the Trojans outscored the Vikings, but that isn’t what’s important in a scrimmage

“They have a really good football team,” he said. “I was very impressed with ASH. But I thought we got out of it what we needed. We made some plays, missed some opportunities on both sides of the ball. But I think we were able to see where we need to improve.

“With only a week and a half in pads before we scrimmage the first time I think that’s a challenge. Just being to evaluate where we are and what we’ve got to get better at, I think we got that out of tonight. Looking forward to going back to work on Monday to get ready for next week.”

Airline opens the season at home against Ruston.

In the other Friday scrimmage, Bossier traveled to Coushatta to face Red River.

Concilio said things did not go “too well” for Bossier. The Bulldogs scored three TDs while the Bearkats didn’t cross the goalline.

However, Bossier’s Roderick Francis and Jamarcus Wilson had interceptions.

The offense also moved the ball some but hurt itself with too many negative plays against a tough Red River defense.

The Bearkats have had to find replacements for Decamerion Richardson and James Davis, both of whom rushed for more than 1,000 yards last season.

Parkway and Northwood played to a scoreless tie in two live quarters at Bossier’s Memorial Stadium.

“Honestly, both teams found out tonight that both of us need to get in game shape,” Parkway first-year head coach Coy Brotherton said. “Both teams tired out. There were some things they were trying to do offensively. I think they were just kind of gassed and weren’t able to do it. Same for us. We moved the ball well and then we would have a messup. Just a lack of focus. We were tired.”

During the live quarters, Parkway’s defense put together a goalline stand after the Falcons completed a long pass. The Panthers also got a turnover on downs after a Northwood interception on the ensuing possession.

“Defense played well,” Brotherton said. “In the controlled portion at the beginning they kind of got gassed a little bit but kind of rose to the occasion there twice in the live portion.

“Offensively we picked up a few first downs. We just couldn’t get a drive going. At the end of the game we had a chance to win it with a field goal and missed it. Threw a shutout in the live portion so that’s good.”

Brady Norcross had a catch-and-run for big yardage to set up the field-goal attempt.

The Panthers did score on their first possession of the controlled portion. Rontavious Richmond’s TD run capped an 11-play, 70-yard drive.

Parkway travels to Alexandria on Friday.

Haughton was down five starters on defense in its scrimmage against North DeSoto in Stonewall. Senior linebacker Jake St. Andre, a two-time All-Parish selection, sat out after twisting an ankle in practice.

Haughton head coach Jason Brotherton said the defense struggled at times, which was expected with the starters out.

The Bucs fared well on offense, though.

Sophomore Collin Rains hit Michael Williams, a transfer from Alexandria, for a touchdown on the first play.

Brotherton wasn’t surprised with how the scrimmage unfolded with both positive and negative aspects.

Brotherton said he expects to have all but one of the defensive starters that sat out, including St. Andre, back for Friday’s opener at home against Woodlawn.

“That was really our first time going full speed, full contact,” he said.

He especially liked the way his defense looked.

“I think we flowed to the football well,” he said. ”Defensively, I think we played really well. We were in good spots and just didn’t finish plays. We lined up correctly. We were able to fly around and compete early on.

“As the game went on when we started rotating a lot of our younger guys in we kind of got exploited that way. All in all I think we really did a good job defensively.”

“Honestly he didn’t get a lot of time to do anything,” Wilson said. “Our offensive line has three new starters and they definitely got broken in the right way tonight.”

The Lions got a boost when senior receiver/defensive back Darrien Perry decided to play football this season. He was considering not playing to focus on basketball.

Perry was a first-team All-Parish selection in both sports last season.

“He’s out there and he played well defensively,” Wilson said. “He caught a couple of passes tonight as well.”

Wilson is just glad he got an opportunity to see his team in action.

“We’re working out those early season kinks,” he said. “I’m glad we were able to at least get a scrimmage in because we really needed it.”

The Lions host Tensas on Friday.