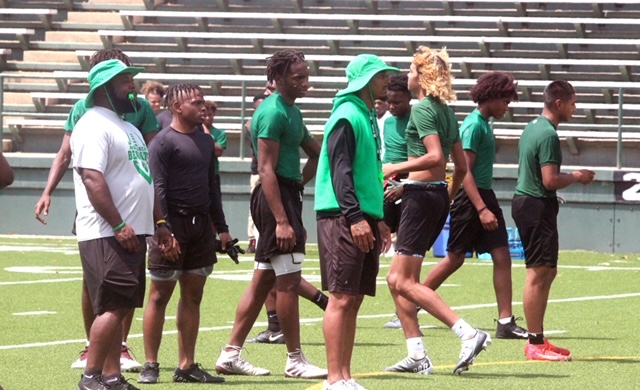 Parish teams take the next step on the road to the start of the regular season with scrimmages this week.

Last week was the first official week of practice.

While temperatures moderated somewhat from the extreme heat of July and early this month, there were times when teams had to modify their practice schedules and routines because of the state’s student-athlete safety law.

Among other things, it limits what equipment players can wear when the Wet Bulb Globe Temperature reaches a certain point. The WBGT is “a measure of the heat stress in direct sunlight, which takes into account: temperature, humidity, wind speed, sun angle and cloud cover (solar radiation), combined measure of temperature, humidity, wind and solar radiation or direct sunlight,” according to the National Weather Service.

On the first day of practice Aug. 8, Airline had to suspend practice and the players removed their helmets and shoulder pads shortly after the start of a 5:30 practice.

On the third day of practice, Bossier players had to remove both shortly after practice began around 2:30. The temperature was in the 80s but the sun was out and the humidity high.

The state law has been in effect since June of 2020. It mandates emergency action plans, requires heat acclimatization and the use of WBGT to monitor environmental conditions, according to the Louisiana Athletic Trainers’ Association website.

Benton began practice at 7 a.m., which is the first block of classes, every day last week.

“We don’t touch the wet bulb in the morning,” Benton Head Coach Reynolds Moore said. “It’s not even close.”

Last year, the Tigers had only one full practice in pads before a 5:45 game against Parkway in the jamboree and even less than that the next week before the season opener against Northwood.

“We were going to give it a shot again fourth block,” Moore said. “We looked up in June and the end of June it’s 110 degrees or whatever it is every day. We just made the decision to make the switch to first block and we bring them back when school’s out and lift and do film.

“I really think it’s going to pay off. I think our kids are going to be fresher. Obviously, they’ve been getting up a little bit earlier but I think they’re enjoying having that afternoon free.”

Moore said practices have had to be more efficient in order for players to get to their second-block classes on time.

“Knowing that you have a deadline, you have to get them out of there in time for that second-block class, has made a difference,” he said. “We’ve been able to get in and out of there pretty quick and still accomplish all the things we wanted to accomplish. It can be done. You just have to get a plan together and do it.”

“Offense and defense have both had their share of good days,” he said. “(Senior quarterback) Gray (Walters) was as good (Friday) as I’ve seen him in practice a long, long time. Good note to finish the week on.”

Benton is scrimmaging a Minden team that went 4-7 last season. The Tigers and Crimson Tide were strong rivals during the years both were in District 1-4A.

“We went all summer,” he said. “It’s a little different in the old days when you had to do a lot of install and things like that. We’ve been able to pick up where we were in the summer and kind of incorporate more special teams in our practices.

“It’s been fun. It’s been hot out there. We’ve had to adjust some of our practice times and schedules but the kids have done a good job of responding.”

The wet bulb temperature forced the Panthers to stay indoors last Monday and they practiced at night on Tuesday. Brotherton said afternoon practices the rest of the week went well.

“The rain helped a little bit,” he said.

Temperatures have remained high early this week with a heat advisory in effect. But it looks like  cooler weather is one way beginning Thursday with a forecast high of 80, according to The Weather Channel app.

Parkway should get a good test against Ouachita. Like Parkway, the Lions reached the quarterfinals of the Class 5A playoffs last season.

“We’ve excited,” he said. “It’ll be a good test, a good judge of where you’re at compared to somebody outside the area. They’re a good football team.”

Brotherton got some good news last week. The Panthers will be able to play their season opener against Minden on Sept. 1 on the new artificial turf field at Bobby Marlow Field at Preston Crownover Stadium. The game had originally been moved to Bossier’s Memorial Stadium.

“They got that thing done quick, less than 30 days,” Brotherton said. “It’s going to be fun. We’re excited to be able to go play on our home field, home turf.”

Airline is scrimmaging a Huntington team expected to contend for the District 1-4A championship. Raiders quarterback Kamron Evans is one of the best in the area.

North DeSoto, Haughton’s opponent, was the runner-up in District 1-4A last season.

Plain Dealing and Magnolia are both members of District 1-1A. The Lions defeated the Mariners 56-22 in Week 3 last season.

BCPD Needs the Public’s Help with Identifying a Thief

BPCC to hold on-campus registration this week for Fall semester