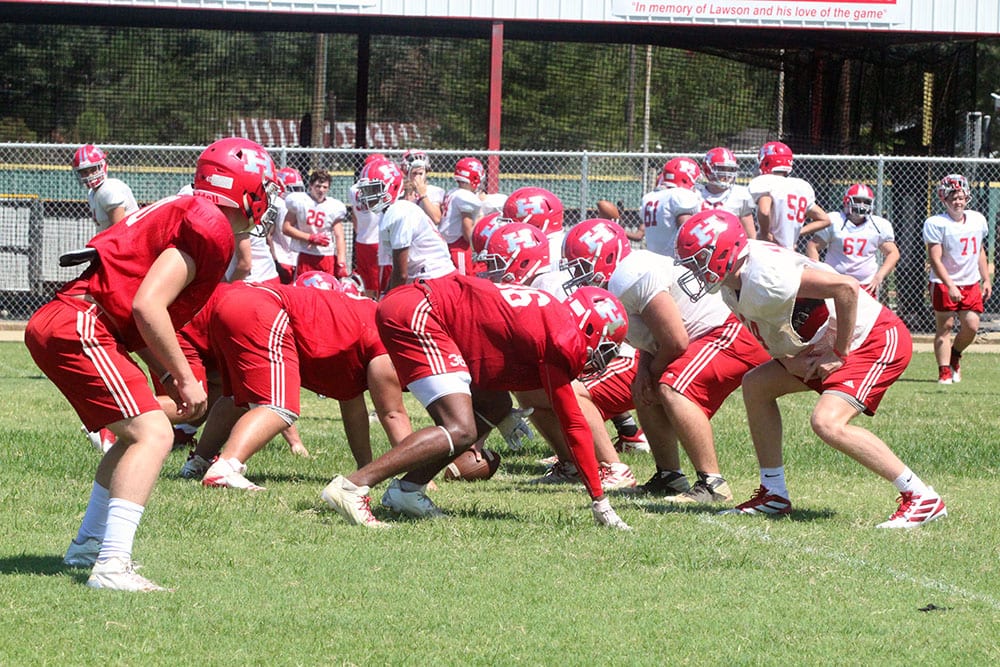 All six Bossier Parish teams will be competing in scrimmages this week.
The scrimmages mark the conclusion of the first three weeks of practice.

It’s the next step in preparing for their season openers Sept. 6.

For players, it’s an opportunity to test themselves against another team rather than going against their teammates.

For coaches, it’s a chance to evaluate newcomers in a game-type situation.
Most scrimmages feature teams going a couple of series of a set of number of plays.

If a team fails to make a first down, the ball is brought back to the original line of scrimmage.

Some scrimmages include situations like goalline offense and defense, where the ball is placed on or inside the 10.

Although it varies, the scrimmages generally end with a 12-minute regulation quarter.

Haughton, one of the favorites to win the District 1-5A title, will be going against a North DeSoto team with a new head coach.

Former Woodlawn and Evangel Christian head coach Dennis Dunn has replaced Scott Abernathy. After coaching at the local schools, Dunn was the head coach at Louisiana College and Pineville.

The Griffins went 8-3 last season, falling in the first round of the Class 4A playoffs.

Airline, which will be trying to rebound from a 3-7 season, faces an Alexandria team that went 8-4 last season.

The Trojans lost a thriller to Ruston 61-60 in double overtime in the second round of the Class 5A playoffs.

Alexandria has one of the top defensive linemen in the country in Jacobian Guillory, the first player from his school to be invited to play in the All-American Bowl.

The 6-foot-2, 320-pound Guillory is rated a four-star recruit by Rivals.com.
In April, he listed LSU, Texas, Texas A&M, Georgia and Alabama as his top five schools.

Airline has a new quarterback in senior Alex Garcia. Senior twins Brian and Brandon Marshall return for their third year as starters in the secondary.

The Trojans have another top prospect in 6-2, 190-pound safety Ja’Darius “Bud” Clark, who has committed to Virginia.

He was a first-team All-State selection last season.

Pineville, Parkway’s opponent, went 4-6 last year and lost to eventual Class 5A runner-up West Monroe in the first round of the playoffs.

Benton takes on a North Webster team that went 8-5 last season. The Knights won the District 1-3A title and reached the quarterfinals of the playoffs.

Benton quarterback Clint Lasiter returns for his junior season. Running back Cameron Barnett is also expected to be an impact player.

Linebacker Ashur Hall and lineman Cade Waites are among the leaders on the defense.

Red River, Bossier’s opponent, went 6-4 last season and lost in the first round of the Class 2A playoffs.

Bossier has a new quarterback to run its Wing-T in junior Coleman Beeson. Track star Decamerion Richardson could give the Bearkats a big-play threat.