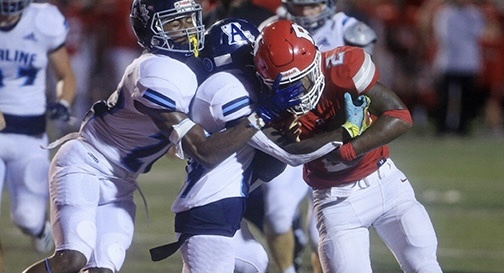 A furious second-half comeback came up just short as the Parkway Panthers suffered their first loss Friday night 38-31 against the Huntington Raiders on homecoming night at Bobby Marlow Field At Preston Crownover Stadium.

The Parkway defense got a stop, and the Panthers took over at their 38. But penalties put them in a fourth-and-33 hole and forced a punt.

After recovering a fumble around midfield, Parkway began driving. But yet another 15-yard penalty set up a fourth-and-17 and forced another punt.

“That killed us the whole first half,” he said. “We just got behind the chains. We were having to chase the chains all night. You can’t do that and expect to play good. We put ourselves in a hole early in the game.

“We did bounce back and recovered. When we didn’t shoot ourselves in the foot, we played well. We just didn’t do it for 48 minutes tonight.”

Another factor in the loss was the play of Huntington quarterback Kamron Evans. According to stats kept by Shawn White of undertheradarnwla.com, Evans passed for 403 yards and three touchdowns. He also scored a rushing touchdown.

“He  puts the ball where it needs to be,” Brotherton said. “He didn’t throw any interceptions tonight. Every time we got them in third or fourth down, they were able to convert. They played a good game.”

The Huntington defense also scored on an interception return in the first half.

After the Raiders scored to go up 26-7 late in the second quarter, Jayden Hardy gave the Panthers some momentum with a 55-yard kickoff return for a touchdown.

But Evans answered with a 25-yard TD pass to Gabe Sparks and Huntington led 32-14 at the half.

The Panthers were in business again after Kris Mesloh recovered a fumble at the Raiders 24. Richmond then went 11 yards for a touchdown to make it 38-31.

While Brotherton was obviously disappointed with the loss, he saw some positives.

Ruston 50, Airline 0: At Ruston, the Vikings had a chance to make a game of it early but couldn’t take advantage of some opportunities.

“We had opportunities in the first half to keep it close, make it a game and just shot ourselves in the foot,” said Airline Head Coach Bo Meeks, whose team dropped to 0-3. “We just didn’t give ourselves a chance.

“Against average football teams that makes it harder to win. Against good football teams it makes it near impossible. Just got to get better. We’ve got to improve. We’ve got to quit making the same mistakes. Got to coach better. Got to play better. Looking forward to getting in to work tomorrow and have a new opportunity.”

Airline has played a very tough schedule. But Meeks was hoping to see more improvement than the Vikings have shown regardless of the competition

“We have played a really tough schedule but at the same time we haven’t shown enough improvement through those challenges,” he said. “We’ve got to come back ready to work on Monday and correct the mistakes that we continue to make three weeks in that are correctable.”

While every game counts toward making the playoffs with power ranking points, the beginning of district play represents a fresh start.

“Definite new territory with district beginning, a new season,” Meeks said. “We’ve got to approach it like that and go to work and get better and be the best that we can be.”