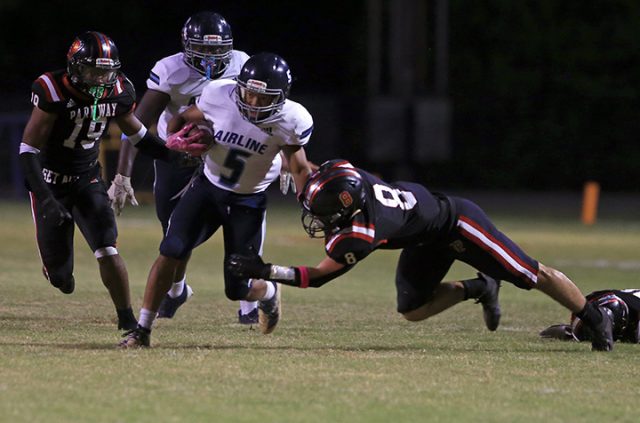 The Parkway Panthers scored 28 unanswered points in the second half to rally past the Airline Vikings 34-17 in a District 1-5A game Friday night at Bobby Marlow Field at Preston Crownover Stadium.

Both teams played without their usual starting quarterbacks. Parkway senior Cade Josting subbed for Cannon Link and Airline freshman Ben Taylor subbed for Ladarius Epps, who hit his head on the turf in Week 6 against Haughton.

Richmond, who has been utilized as both a running back and receiver, gained 191 yards on just 18 carries, an average of 10.6 yards per carry. He also scored TDs on runs of 18 and 4 yards along with a two-point conversion.

Josting attempted just six passes. But he completed a 7-yard pass for a touchdown to tight end Jatavious Calhoun.

Just a few weeks ago, Josting, a standout pitcher, was in the student section waving a flag a cheering on his classmates. But when Link got hurt, coaches came to him and asked if he wouldn’t mind joining the team as a backup quarterback.

He obviously answered yes even though the last time he played was his freshman year. Friday night was his first start. But in Week 5 against Captain Shreve, Josting completed a pass for an apparent first down on a fake punt with the game still in doubt. Of course, that play was erased because of “human error” on the part of the chains crew and officials.

While Parkway was the favorite, the game is a rivalry between the schools from North and South Bossier. City. That basically means throw out the records.

The Vikings played like they were the favorite in the first half as they built a 17-6 lead. Sophomore Tre Jackson scored a rushing touchdown and caught a TD pass from Taylor, who turned in a solid performance.

Parkway Head Coach Coy Brotherton said his defense stepped up in the second half. Linebacker Barrett Newman made a big impact with two interceptions.

Cameron Fink caused a fumble and recovered it.

“We played a lot better defensively in the second half, able to shut them out,” Brotherton said. “Got the offense rolling a little bit. We had more opportunities, more possessions in the second half with the way the defense played. Just glad that we were able to get out of there with a victory.”

Brotherton was impressed with the way Airline played in the first half.

“Their record really doesn’t indicate how good they are,” he said. “Their first three games this year were tough, teams that probably a lot of us would’ve struggled against. And tonight they played well. That quarterback they had tonight, the freshman Taylor kid, he made some good throws.”

Parkway visits Natchitoches Central on Thursday. The Chiefs (6-1, 3-1) lost to Captain Shreve 31-20 Friday night in a battle for the district lead.