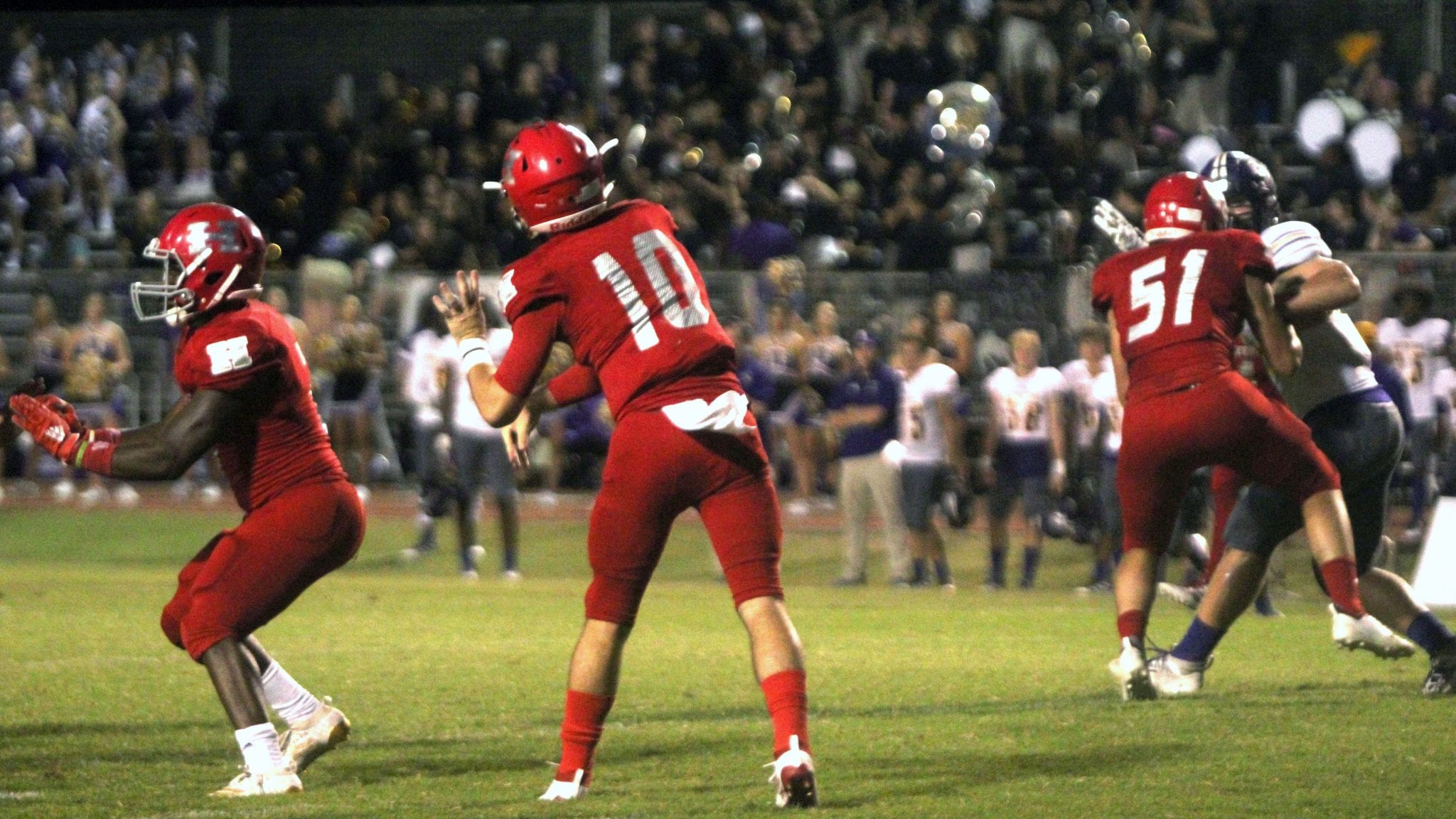 The Haughton Buccaneers have many ways they can beat you.

Friday night, the Bucs used big plays in the passing game and a strong defensive effort to subdue the Benton Tigers 36-7 in a District 1-5A contest at Harold E. Harlan Stadium.

Haughton visits Airline Friday. The Vikings, one of only two teams to defeat the Bucs in the regular season last year, defeated Southwood 42-13 Friday night.

Haughton junior quarterback Peyton Stovall has had many outstanding performances over the last two seasons but none better than Friday night.

He completed 27 of 42 passes for 462 yards and five touchdowns with no interceptions. The yardage total was 11 yards shy of Dak Prescott’s record of 473 in a 2010 playoff game against Woodlawn-Baton Rouge.

Haughton leading rusher Keyshawn Davis left the game with an ankle injury in the first quarter. Neither team had success on the ground. Haughton had 22 yards and Benton 23.

Haughton was penalized 14 times for 125 yards. Most of those came in the first half and were for offensive holding. One cost Whitten a touchdown.

“It was really a sloppy game,” Haughton coach Jason Brotherton said. “To their credit, they did a great job stuffing our run. They controlled the line of scrimmage. They’re D line did. Hats off to them for that.

“Our quarterback and our receivers made big plays all night though. When you can hit big plays you can score when you’re not really not consistently moving the ball. Happy to see that.”

Last week, Benton allowed more than 400 yards rushing in a loss to Parkway. Friday night it was the pass that did the Tigers in.

“In the secondary we’ve got some young guys back there, some guys that are learning,” Benton coach Reynolds Moore said. “That’s kind of one of our weaknesses. They tried to run the football on us. I thought we did a good job tonight stopping the run but they were able to pop those big plays and get over the top.”

After a couple of series where the teams traded punts, Haughton scored on Stovall’s 41-yard pass to Whitten, who was running by himself down the visitor’s sideline.

On the Bucs’ next possession, Stovall hit McWilliams for the 56-yard score.

“We started a little bit flat,” Stovall said. “All week long in practice we stressed about not doing that. Unfortunately it happens. It’s part of the game. It’s part of football. But I feel like we kind of got it going.”

The second quarter was marred by penalties on both teams but Haughton was hit the hardest with the holding calls.

“We had over 100-plus yards of penalties that got called back,” Stovall said. “That’s very unfortunate but like I always say I’ll never get mad at my offensive line for holding just because they’re trying to do their job a little bit extra more. I don’t really blame them. It was a great game. They did everything they could. Our receivers made big plays.”

It looked like the score was going to be 13-0 at the half. But on the final play of the second quarter, Stovall rolled to his right and McWilliams got open around the Tigers 10. He made the catch and ran into the end zone, completing the 34-yard play.

Carter Jensen’s second PAT made it 20-0. An interception by Jacob Stephens set up the TD.

“The one right before halftime was kind of a back breaker, really, really tough to take,” Moore said.

Benton had a chance to seize the momentum early in the game. The Tigers blocked a punt in Haughton territory. But Benton turned it back over on the next play with Sean Hardison making the fumble recovery.

Early in the third quarter, a bank of lights went out on the visitor’s side. That caused about a 10-minute delay.

When play resumed, Benton’s Clint Lasiter hit Cameron Barnett with a pass in the left flat. Barnett broke free and went 48 yards for a touchdown. RJ Moore’s PAT cut Haughton’s lead to 20-7 with still almost a full half to play.

But the Bucs shut the door quickly. Stovall passed to Whitten, who made the catch near the Benton sideline. He broke loose and sprinted to the end zone for the 77-yard score.

A few minutes later, Stovall threw the 19-yarder to McWilliams in the back left corner of the end zone and the Bucs led 34-7.

Khaylon Chapple then sacked Lasiter in the end zone for a safety.

According to stats kept by Lee Hiller, covering the game for The Times, Lasiter completed 14 of 28 passes for 127 yards.

Other than the big play, Brotherton thought his defense played well.

“They caught us in an all-out blitz and made a perfect play call, coach (Moore) did,” he said. “But other than that the defense played lights out all night.”

A lot of reserves on both teams got to see action in the fourth quarter.

Benton has been hit hard by injuries in the first half of the season. The Tigers were missing a starting offensive linemen and three defensive starters, Moore said. But as after last week’s loss to Parkway, he wouldn’t use it as an excuse.

Benton has had a tough welcome to District 1-5A, but Stovall for one believes the Tigers have what it takes to compete in the district.

“Everybody talks about them not being able to play with some 5A teams,” he said. “But they’re a really good football team. I think they fit really good in our district. They have a really good coach on their side. Their quarterback is really good, Clint. So they’ve got a lot of good things going for them. Their defense played really well too.”

Before the season, the Haughton-Benton game was  dubbed the Battle of the Wooden Hippo by the coaches.

It started when Moore had to sell a Wooden Hippo for his daughter on Facebook. Moore received a text from Coy Brotherton, Jason’s brother and Captain Shreve’s offensive coordinator, joking that Jason might want to buy it. That eventually led to them deciding to let the winner of the game keep it.

The Wooden Hippo, looking kind of lonely, sat on a table between a helmet from each team on the track near where Haughton’s homecoming court sat for the duration of the game.

Bossier Parish Assistant Superintendent of Administration and Personnel Jason Rowland presented it to Brotherton after the game. It will stay in Haughton for a year until the Bucs take it to Tiger Stadium, where the right to keep it will be on the line again.