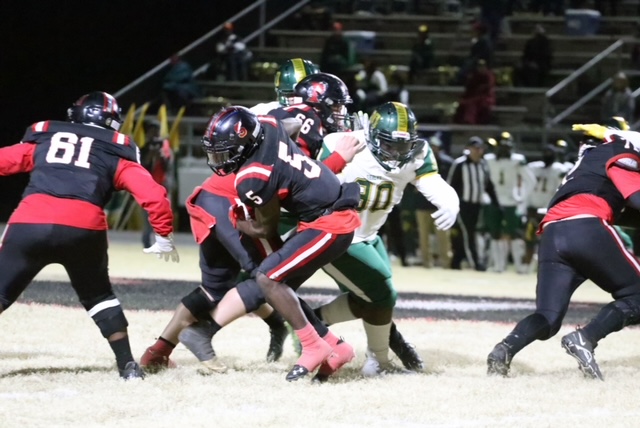 Playing the role of underdog has worked out well for the Parkway Panthers so far in the Class 5A playoffs. The Panthers have pulled off two straight upsets to reach the quarterfinals.

They will be underdogs again Friday night.

To reach the semifinals, Parkway will have to pull off another upset against one of the state’s most dominant programs over the last 15 years.

The Wreckin’ Rams are the two-time defending state champions. Acadiana has won six 5A titles, the first in 2006.

This isn’t the first meeting between the teams. The Wreckin’ Rams defeated the Panthers 77-41 in the 2013 state championship game. Parkway returned the favor in 2015, defeating Acadiana 55-28 in the second round. That was the last time the Panthers reached the semifinals.

The Wreckin’ Rams’ No. 7 seed is a bit deceptive. They were ranked No. 4 in the final Louisiana Sports Writers Association Class 5A poll.

Acadiana brings a nine-game winning streak to South Bossier City. After going 7-0 in District 3-5A, the Wreckin’ Rams defeated No. 26 Dutchtown 43-13 in the first round of the playoffs and No. 10 St. Amant 56-23 in the second.

The Panthers will face a run-oriented option offense similar to Byrd’s.

Omiri Wiggins rushed for 174 yards against Dutchtown. Williams had 121 on just 11 carries.

Acadiana started the season 1-2 with losses to Catholic 20-0 and Lafayette Christian 14-13.

The Rams then dominated District 3, outscoring opponents 351-69. They have averaged 50 points per game during the winning streak.

Parkway has been on a roll of its own, winning four in a row.

The Panthers have a balanced offense but they like to keep it on the ground too.

Junior Jaylan White has rushed for 1,374 yards on 184 carries and scored 12 rushing touchdowns in 11 games. He has also caught 22 passes for 413 yards and three touchdowns.

Senior Ron Richmond has rushed for 1,283 yards on 167 carries and scored 13 rushing touchdowns. He also has 60 receptions for 839 yards and 11 touchdowns.

In the last three games, Richmond has rushed for 700 yards on 76 carries.

Senior quarterback Cannon Link has completed 125 of 184 passes for 1,780 yards and 18 touchdowns with four interceptions in 10 games.