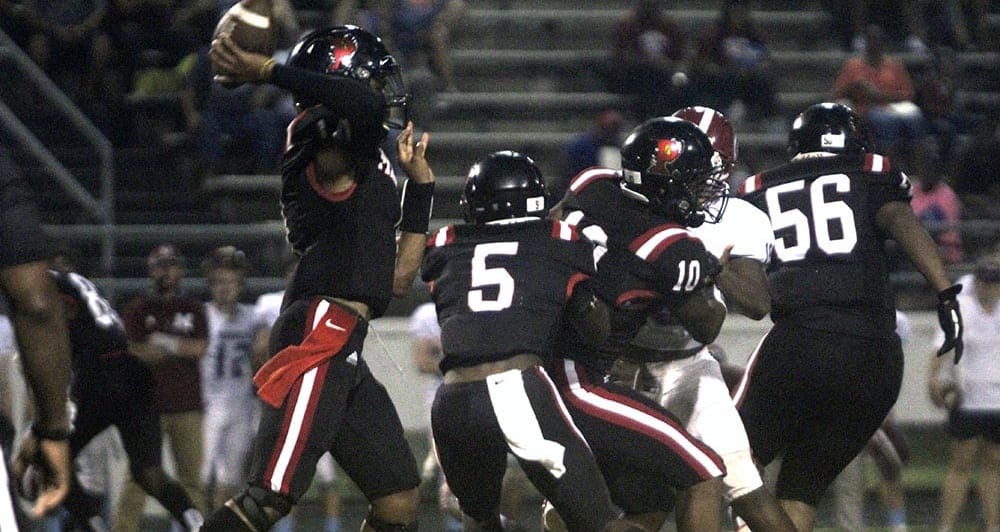 Here is a quick look at Friday’s Week 2 games involving Bossier Parish teams. All games kick off at 7 p.m.

Union Parish is ranked No. 5 in the Louisiana Sports Writers Association Class 3A poll.

Last year, the Fightin’ Farmers defeated the Vikings 30-27 in the season opener, ending Airline’s three-game winning streak in the series. Union Parish scored the winning TD with 33 seconds left after Airline had taken a 27-23 lead with 2:06 to play.

Last week, Union Parish quarterback Trent Ginn rushed for 185 yards on 12 carries, an average of 15 yards per carry, and scored two touchdowns. He only attempted seven passes and completed three for 89 yards, including a 53-yard TD to freshman Treyvion Holly.

Airline will look to continue the offensive success it had in the second half last week. Alex Garcia passed for 271 yards with most of that coming in the last two quarters.

Rovelle Young had a big game on the ground with 97 yards.

Both defenses will be tested. Spartans quarterback Cameron Jones passed for 146 yards and three TDs. He also ran for 93 yards on 11 carries and scored two touchdowns. Steven McBride had five catches for 127 yards and two TDs. If that’s not enough, East Ascension’s other quarterback, Hobart Grayson IV, ran for 98 yards.

Haughton has plenty of offensive weapons, too, so a high-scoring game won’t be a surprise.

Junior quarterback Peyton Stovall, who sat out the season opener because of an injury, is expected to play, according to a KTBS report.

This will be Vicksburg’s fourth game. The Gators opened the season with a 42-0 loss to Madison Central and followed that with a 19-14 victory over Velma Jackson.

Vicksburg’s Shakori Regan has completed 38 of 64 passes for 366 yards and two touchdowns with four interceptions. He’s also rushed for 137 yards. Ced Phillips is the Gators’ leading rusher with 212 yards on 39 carries.

The game is the home opener for Vicksburg and will be the first one played on the new artificial turf field at Memorial Stadium, according to the Vicksburg Post. Because of ongoing construction, parking will be limited, the Post reported, and street parking could be the best available option. Fans are advised to arrive early. Like Benton, Vicksburg has had to commute for practice, going from the high school to the junior high.

Benton got into an early 14-0 hole last week and then outscored Oak Grove 33-7 the rest of the way. Junior quarterback Clint Lasiter passed for 261 yards and on touchdown. He also rushed for two TDs. Artis Cole had four catches for 116 yards and a TD.

Bossier (1-0) at Lakeside (1-0): The Bearkats defeated Madison 32-12 on the road last week. The Warriors defeated Lincoln Prep 54-41 at Eddie Robinson Stadium in Grambling.

Lakeside trailed 21-14 at the half. The game was tied at 35 after three quarters. The Warriors outscored the Panthers 19-6 in the fourth.

Jocquez Lott led Lakeside with 225 on 15 carries, an average of 15 yards per carry, and scored three touchdowns.

Bossier led 14-6 at the half and then broke the game open in the third quarter with two touchdown runs by Decamerion Richardson, who finished with 205 yards.

The Bearkats defense played well with one of Madison’s TDs coming on an interception return.

Charzay Morris led the Rebels on the ground with 104 yards on just 11 carries.

Plain Dealing got off to a good start, scoring the game’s first TD. But the Raiders’ depth and athleticism began to take its toll and Huntington led 34-7 at the half.

Senior Ken Gay had a nice debut at quarterback, passing for 241 yards and two TDs. Darrien Perry caught six passes for 139 yards and a touchdown.