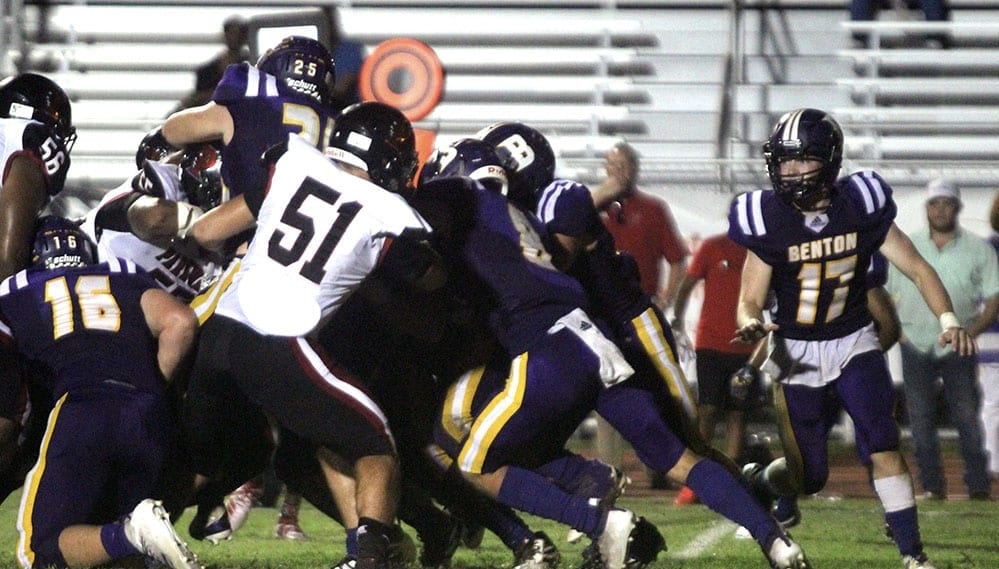 Bossier (4-0) at Montgomery (3-1): Bossier is off to a 4-0 start for the first time in 15 years. The Bearkats have already exceeded their win total of the last two year’s combined.

Bossier head coach Michael Concilio gave his defense a lot of the credit for last week’s 28-13 victory over North Caddo. That defense will be tested by a Tigers squad averaging 44 points per game.

Montgomery, a member of District 3-1A, came close to cracking the top 10 in the LSWA Class 1A poll this week, coming in at No. 11. The Tigers are coming off a 36-7 victory over Class 3A Pine Prairie. Their lone loss was 44-34 to Class 2A Lakeview in Week 3.

Bossier’s Decamerion Richardson failed to rush for more than 200 yards for the first time last week. But he still contributed 76 and leads Bossier Parish with 697 yards. James Davis is averaging 94.75 yards rushing per game.

The Bucs were balanced on offense with 202 yards passing and 204 rushing. Running back Keyshawn Davis (153 yards rushing) and receiver Tristan Sweeney (116 yards receiving) had their best games of the season. The defense shut out Byrd in the second half. Logan Wilkerson returned an interception for a touchdown.

Benton opened 1-5A play with a 49-26 home loss to Parkway. The Tigers allowed more than 500 yards total offense (per Parkway stats), including over 400 on the ground. To Benton’s credit, the Tigers found a way to stay in the game after falling behind by three touchdowns twice in the first half.

Benton has been hit hard by injuries and an illness sidelined another defensive starter last week. But the Tigers have been very good at times. You have to be to win three of four. They haven’t played a complete game yet. They’ll likely have to Friday to pull off the upset.

Parkway is coming off a 49-26 victory over Benton in a 1-5A opener. The Panthers rolled up 442 yards on the ground. Jamall Asberry rushed for 273 yards. He scored five touchdowns, including one receiving. Rontavious Richmond rushed for more than 100 yards. Gabe Larry passed for more than 100.

Captain Shreve, which was tabbed as one of the favorites to win the district title before the season, opened 1-5A play with a 57-7 rout of winless Southwood.

The Gators are averaging 324 yards per game. DJ Fleming, who sat out the season opener with an injury, has rushed for 321 yards on 43 carries, an average of 7.5 yards per carry.

Darrius Grant has completed 27 of 59 passes for 369 yards and five touchdowns. Grant did not play last week after suffering a foot injury in a 27-26 loss to Scotlandville in Week 3.

Shreve dominated last year’s game, winning 23-2. It was the Gators’ first victory in the series since 2006. Fleming rushed for 180 yards on 22 carries.

The Panthers will be out to avenge that loss and show they have what it takes to win the district title. But it will be a challenge.

Airline played outstanding defense last week and got off to a fast start on offense. Hunter Rice came up big with two interceptions.

Alex Garcia passed for 154 yards and two touchdowns. He ranks second in Bossier Parish in passing yardage with 912. Daniel Smith, who has both TD receptions, is the parish’s leading receiver with 20 catches for 400 yards and seven TDs.

Southwood has been best by injuries. The Cowboys have lost by large margins three straight games after falling to Pineville 27-26 in the season opener.

Airline has equaled its victory total of last season. The should exceed it Friday night.

Arcadia lost to Homer 48-6 in its district opener.

Two other players may also have to sit out Friday’s game with injuries. Plain Dealing only dressed out 23 players against Haynesville.

If the Lions have been able to regroup during practice this week, Arcadia could be good for what ails them. The Hornets haven’t come closer than 22 points against an opponent.

Obviously, Plain Dealing can’t afford too many more injuries. That could put the second half of the season in jeopardy.