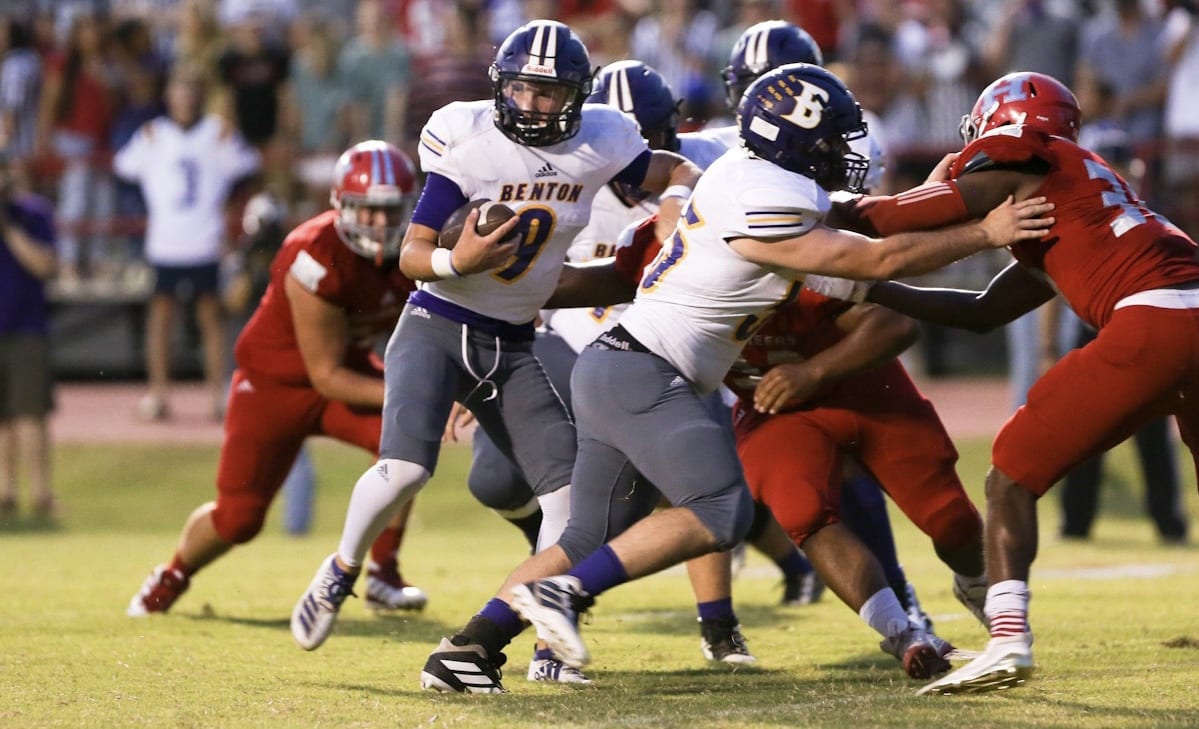 Lincoln Prep (1-4, 0-2 1-1A) at Plain Dealing (2-3, 0-2): Plain Dealing dressed out only 20 players, including four junior high, in last week’s 44-14 loss to previously winless Arcadia on the road. Senior quarterback Ken Gay suffered an injury to his throwing shoulder but played through it.

Despite being short-handed, the Lions trailed by only two touchdowns at the half.

Lincoln Prep, which lost to Homer 52-7 last week, has also been struggling. The Panthers from Grambling probably won’t have many more players dressed out than Plain Dealing. Lincoln Prep’s lone victory was over winless Madison 26-20 in Week 3. The Panthers allowed 51 or more points in their four other games.

Thurman said battling the injuries and some other issues the last few weeks has been rough. But the Lions definitely have a chance to get back to .500.

Benton was without four starters, including three on defense, in last week’s 36-7 loss to Haughton. Coach Reynolds Moore expects to have one of those players back Thursday.

The Tigers couldn’t stop Haughton’s big-play passing game a week after giving up more than 400 yards rushing in a loss to Parkway.

The defense will be tested again against Shreve, which has one of the state’s best running backs in DJ Fleming. Fleming rushed for 238 yards in a 35-13 victory over Parkway last week.

Benton was down only 13 to Haughton early in the second half but the Bucs scored two quick touchdowns to end any hopes of a comeback.

The Benton offense has plenty of playmakers, including quarterback Clint Lasiter and running back Cameron Barnett. All will need to be at their best against the Gators.

Moore said he figured it would take a near-perfect game to defeat Haughton. It might also take that to defeat Shreve.

Airline built a big lead, but Haughton rallied and went ahead 32-28 with 4:10 left. The Vikings regained the lead on a Jamal Johnson touchdown run after converting a fourth-and-7.

Airline barely missed making the playoffs at 3-7, but the victory in the regular-season finale gave the Vikings a boost heading into the offseason.

Like last season, Haughton will play the favorite’s role Friday. The game shapes up to be another good one.

Haughton is averaging 42.6 points per game. The Bucs have won every game by at least 18 points.

Last week, Peyton Stovall passed for 462 yards and five touchdowns in a 36-7 victory over Benton. Receivers CJ McWilliams and Matthew Whitten also had big games. The Bucs played most of the game without leading rusher Keyshawn Davis, who suffered an ankle injury in the first quarter.

The defense turned in an outstanding performance.

Airline has played solid defense all season. This will be the Vikings’ biggest challenge since a 49-28 loss to Ruston in Week 2.

Airline struggled a bit on offense early in last week’s 42-13 victory over Southwood before scoring three times in the second quarter.

Quarterback Alex Garcia has been effective. Daniel Smith and Kevin Pouncy are two of the area’s best receivers.

Byrd (1-4, 1-1 1-5A) at Parkway (3-2, 1-1): Parkway hung with Captain Shreve for three quarters last week, but the Gators scored three touchdowns in a three-minute span early in the fourth quarter to pull away for a 35-13 victory.

After rushing for more than 400 yards in a Week 4 win over Benton, the Panthers managed just 40 against the Gators and finished with less than 200 total yards.

They’ll be facing a Byrd team coming off its first win of the season. The Yellow Jackets kicked a field goal on the game’s final play to defeat Natchitoches Central 9-7.

Byrd has played a tough schedule and has had to deal with some injuries. Like any team that faces the Jackets’ option offense, Parkway will need to limit long drives and force fumbles.

Bossier (5-0) at North Webster (2-3):  Bossier has a chance to show it will be a contender for the District 1-3A title. North Webster won it last season when the district was comprised of just the Knights, Loyola and Green Oaks.

Bossier was the only team in the new five-team district to make it through the first half of the season unscathed. The Bearkats defeated Class 1A Montgomery, which was averaging 44 points per game, 33-8 last week. The Bearkats’ Wing-T rolled up more than 300 yards on the ground.

Bossier’s offense has been impressive all season. Running backs Decamerion Richardson and James Davis have proven to be a potent 1-2 punch.

North Webster will likely be the Bearkats’ toughest test yet. The Knights’ other two losses were to Class 3A power Sterlington and Class 4A Minden.