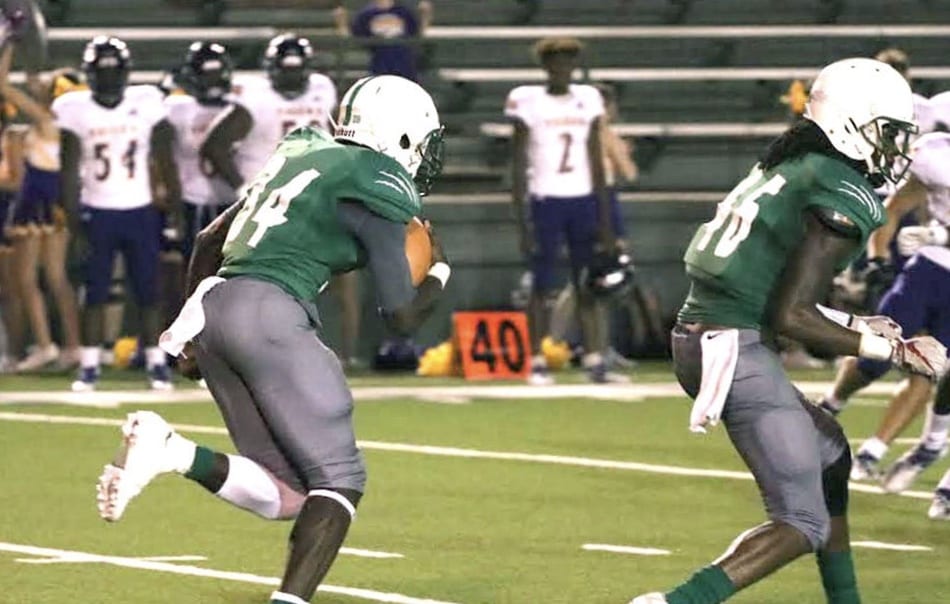 Airline suffered its first district loss last week, 21-6, to Byrd, but the Vikings still control their own fate. If they win Friday, they will go into the season finale against Captain Shreve with a chance to earn a share of the title or perhaps win it outright.

There is a scenario in District 1-5A where Airline, Shreve, Haughton and Byrd could all share the title with two losses each. Benton would have to upset Airline for that to have any chance of happening.

Airline head coach Bo Meeks isn’t one to make excuses. But last week’s weather conditions weren’t exactly conducive to the the Vikings’ offensive style of play. A heavy misting rain fell throughout the contest after it rained for most of the day.

Airline had just 156 total yards, including 37 passing. The Vikings came into the game averaging about 235 yards per game through the air.

Meanwhile, Byrd’s option offense controlled the ball for 33 of the game’s 48 minutes. The Yellow Jackets threw just one pass.

Benton’s defense has had its issues this season, but the Tigers came through against Southwood in a 44-25 victory last week. Three of the four Cowboys’ touchdowns came on defense and special teams. Cameron Barnett rushed for more than 200 yards and scored four touchdowns.

Airline is the favorite. Benton certainly has a chance, but it will likely take the Tigers’ best game of the season to win.

Benton is No. 33 in the Class 5A power rankings, according to louisianasportsline.com. The top 32 in the final rankings make the playoffs. A victory Friday would likely clinch a spot.

But the Bucs still have some playmakers like receivers Matthew Whitten and Tristan Sweeney and running back Keyshawn Davis.

The defense has also played well all season. It kept the Bucs in the game against Shreve.

Natchitoches Central will definitely provide a challenge. The Chiefs could easily be in the thick of the district race, having lost to Byrd 9-7 and Captain Shreve 10-7.

Last week, they had 361 yards rushing against Parkway (per Parkway stats).

The score in the Parkway-Natchitoches Central game is deceptive. The Panthers were very much in the game, trailing just 20-14 late in the third quarter.

But the Chiefs scored twice in the fourth quarter, including a fumble return in the last minute. As mentioned above, Parkway just couldn’t stop Natchitoches Central’s running attack.

At No. 27 in the Class 5A power rankings, according to louisianasportsline.com, Parkway could make the playoffs without winning another game. But a win Friday should seal the deal.

Southwood led Benton in the third quarter. The Cowboys have nothing to lose, which makes them a dangerous team. Southwood has not won a district game on the field in 10 years.

Bossier pulled away late against Mansfield. The Bearkats defense and special teams set up the offense with good field position.

James Davis continues to be one of the area’s best all-around players. He rushed for 102 yards and a touchdown, caught a TD pass and recovered a fumble on a kickoff return last week. He also had a 42-yard punt return.

At No. 16 in the Class 3A power rankings, Bossier is on the bubble as far as hosting a first-round playoff game.

Green Oaks won’t be a pushover. The Giants have two of the best offensive players in the area in quarterback Keith Baker and sophomore receiver De’Coldest Crawford, who committed to LSU this week.

Green Oaks played Loyola close in Week 5, falling 36-28, and defeated Mansfield 32-8 in Week 6. Loyola clinched a share of the district title last week with a victory over North Webster.

Plain Dealing’s lopsided loss to Calvary, a 1A team with 5A talent, was hardly a surprise. Lions quarterback Ken Gay and receiver Darrien Perry are both having very good seasons.

After starting the season 0-3, Homer has won four of five, all in district play, with its only loss to Calvary 56-6. The Pelicans defeated the Lions 46-0 last year.

Regardless of Friday’s outcome, Plain Dealing could be home in the first round of the playoffs. The Lions are No. 12 in the power rankings, three spots higher than Homer. They close the regular season against Magnolia.