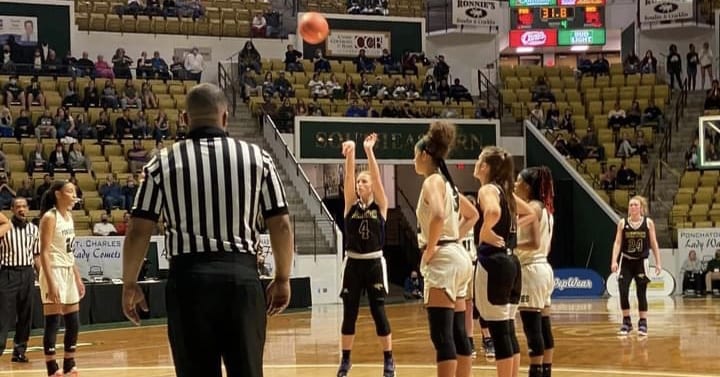 When Benton head coach Mary Ward talked to her team after the No. 12 seed Lady Tigers stunned No. 1 Ponchatoula 58-48 in the Class 5A semifinals in Hammond on Wednesday night, she made it clear how much of a team effort it took to win.

“Obviously, Jada is Jada, but man, what everybody else does is so crucial, so important. I think that’s why we’ve been very successful. I mean, gosh, it is so true that all five people on the court have to be clicking on all cylinders in order to win at the finals like this.”

The Jada she is referring to is senior guard Jada Anderson, who scored a game-high 25 points and took over down the stretch after the Green Wave went ahead 44-42.

But she also could’ve been talking about Jada Stewart. The 6-foot junior grabbed a whopping 22 rebounds to go with eight points and three blocks.

Benton (17-6) will get the chance to defend their state title Saturday night at 7:30 at the Southeastern University Center in Hammond against District 1-5A rival and No. 6 seed Captain Shreve. The Lady Gators (20-5) defeated No. 10 West Monroe 47-32 in the other semifinal.

Benton defeated Shreve 39-37 in their only district meeting on Jan. 8 at Benton.

Ponchatoula finished 31-1, falling in the semifinals for the second straight year.

Benton advanced to the finals for the third straight year. Two years ago, the Lady Tigers finished runner-up in Class 4A.

Ward knew going into Wednesday’s game that nobody outside of Benton gave her team much chance of winning.

This looked to be Ponchatoula’s year. The Green Wave had dominated three playoff games and were only challenged a few times in the regular season.

And they had defeated the Lady Tigers 66-49 on Dec. 5 in the Denham Springs tournament.

But Ward liked her chances. The earlier game was played not long after Benton played its first game in the tournament following the drive to Denham Springs.

“Ponchatoula was good,” she said. “But I had a really good feeling. I knew the first time we played them we had played a game like the hour before and drove all the way down to Baton Rouge. I kind of liked my odds playing them the first game of the night.”

Also, even though the Lady Tigers are the defending champions, all the pressure was on the Green Wave.

“Trying to stay undefeated, trying to get to the finish, that’s hard. You’ve already beat this team by 17. That’s a lot of pressure for any age group. That’s how I kind of felt. I kind of definitely used that as motivation for our team.”

Benton scored the game’s first seven points and led 14-11 after a quarter. The Green Wave rallied in the second and took a 26-25 lead into the locker room.

The Lady Tigers got some separation in the third quarter and led by as many as 10 points.

“We had (sophomore) Maddy Ryan get four points just right there kind of towards the end,” Ward said. “She usually never shoots that much. I think she was like two for three at the end and that was big. They started pressing us a little bit and it kind of gave us a little trouble. Then Jada Anderson just took over. She got the ball in her hands and distributed it to the people she needed to.”

The press helped the Green Wave get back in it. They tied the game at 42 and then grabbed the two-point lead.

Benton then closed the game with a 16-4 run.

The Lady Tigers made 9-of-13 free throws in the fourth quarter.

Overall, Ward said defense was the key to the victory.

“They had two players that we really focused in on and we gave them to sophomores and said you’ve got to stop these girls and they really stepped up to the challenge,” she said. “I don’t know if they stopped them but they contained them. And then everybody else did their job with helping over and blocking out and Jada Stewart gets 22 rebounds and that’s incredible.”

Ponchatoula shot only 27.9 percent from the field, including 2-of-12 from 3-point range.

Anderson was 8-of-18 from the field with two 3s and 7-of-10 from the free throw line. She also had seven assists and four rebounds.