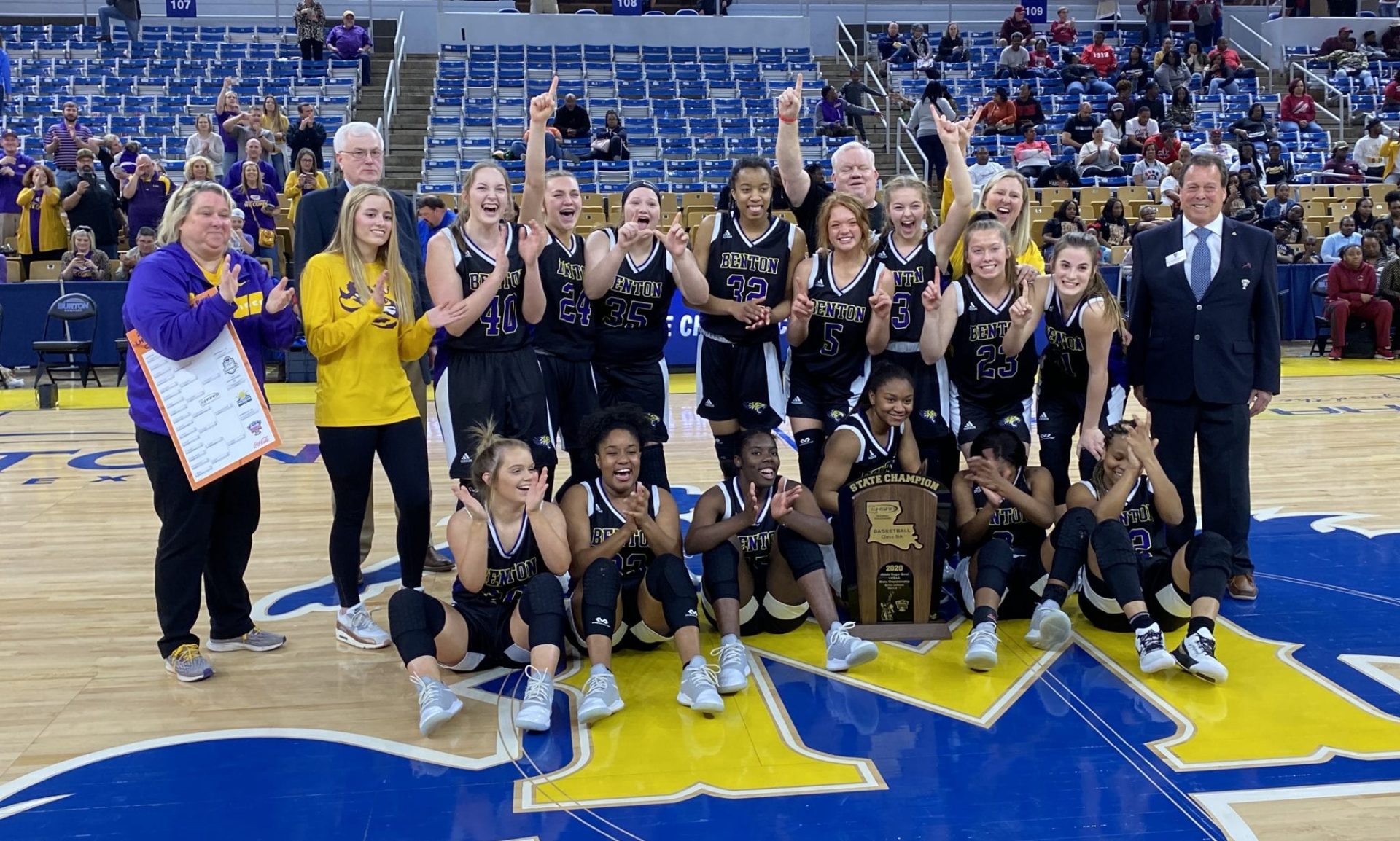 A year ago, the Benton Lady Tigers walked off the court at Rapides Parish Coliseum in Alexandria a disappointed group.

There were tears all around following a loss to Warren Easton in the Class 4A state championship game.

Friday night at Burton Coliseum in Lake Charles, if the Lady Tigers shed any tears, they were ones of joy.

Benton, the No. 2 seed, completed a dominating run through the Class 5A playoffs with a 62-48 victory over No. 1 Ouachita Parish in the state championship game. The 14-point margin was the Lady Tigers’ smallest in the playoffs.

It was the school’s first state championship in girls basketball in four trips to the finals.

Benton head coach Mary Ward said the disappointment of last season’s loss was one of two things that were key to the championship season.

“I think everybody from our team last year that returned got better and had a whole year of experience,” she said. “I think that was the No. 1 thing. The second thing is I think that hurts losing, from coming so close and just not getting it.”

Ward has now won state championships as a coach and player. In 1992, she led Airline to the Class 5A state title.

Richard Cox, one of Ward’s assistants at Benton along with Michelle Owens, was Airline’s head coach.

Benton trailed 16-12 after the first quarter then took control in the second, outscoring the Lady Lions 21-8 for a nine-point halftime lead.

The domination continued in the third quarter. The Lady Tigers went on a 14-5 run and led 49-27 going into the fourth.

Ward said the Lady Tigers weren’t following the game plan in the first quarter. Instead of its usual run-and-jump, trapping defense, Benton was playing man-to-man.

Ward was not pleased.

“At halftime I even told them, ‘Girls, I can’t remember the last time I got on to ya’ll and have had to yell at y’all. I know it’s a big game, but take a big breath and let’s just play,’ she said.

“Once they started executing our game plan in the second quarter that’s when our defense became our best offense. We just kept getting turnovers and steals and so forth.”

Benton led by as many as 21 with a little over four minutes to play. Ouachita Parish made a run and cut the lead to nine. But the Lady Tigers made their free throws down the stretch as the Lady Lions were forced to foul.

Junior guard Jada Anderson led Benton with 33 points. She was a sparkling 15 of 18 from the free throw line. Anderson, who was named the MVP, also had four assists.

Ward said Anderson had something to prove after struggling in last year’s title game.

Anderson is usually one of the shortest, if not the shortest, players on the court. But she hasn’t let that be a liability and always seems to come up big.

“Everybody is always kind of questioning her height,” Ward said. “Can she play? They haven’t ranked her as one of the best in her grade. And that’s a shame because that girl can flat-out play.”

At the postgame press conference, Anderson thanked those who have doubted her.

Ward said Anderson has a way of being able to adjust her body in the air to draw fouls as she’s flying toward the basket.

“Jada from last year from Jada to this year is so much better,” Ward said. “That improvement is big time.”

While Anderson was deserving, Ward said Qua Chambers could just as easily been the MVP.

Chambers completed her outstanding career with 22 points and six steals.

“Who do you pick between those two?” Ward said. “The best thing about those two guys is they’re cheering for each other. They’re both each other’s biggest fan. And that’s when you know you’ve got something special.”

Benton’s role players did their jobs as they have all season.

The way everyone has contributed was another factor in Benton’s success this season.

“I think it was just different people stepping up at different times,” Ward said. “At the beginning of the season we had one of our main starters (Ella Kate Malley) go out with an injury. We kind of had a different little lineup change and so just figuring out what was working and once it started working just putting that gas pedal down and going full throttle all the way to the end.”

Over the last three seasons, Benton has compiled a record of 90-16 and been to three straight state tournaments. The last two seasons Benton was No. 1 in the power rankings. The Lady Tigers were No. 1 most of this season, but a new rule giving district champions a power point pushed Ouachita Parish to No. 1 for the playoffs.

Despite the success, Ward doesn’t believe the Lady Tigers have gotten the credit they deserve.

“That’s three years we have been ranked one all the way through,” she said. “I know we didn’t finish one these last two years but it seems like everybody is always like, ‘Well, I don’t know how Benton’s winning.’ I guess when you look at us, we don’t look that intimidating. We’re not these tall, athletic people.”

One of the first things Ward did after winning the title was face-time her daughter, Emily, who is with the LSU Lady Tigers at the SEC Tournament. Emily, a three-time All-Parish MVP, was one of the players who left the court disappointed last year.

She is also one of the players that helped get the program to the level it’s at now. Mary Ward knew that Emily and players like Abbie Wynn, another of last year’s seniors, couldn’t be replaced. So this season the role players were challenged to do some of the things that Emily and Wynn did the previous four.

It’s all about building a successful program.

“I called Emily and face-timed her and the girls stopped what they were doing and ran over and were like, ‘Emily!’ ” Ward said. “She’s a big part of this. Next year when we make a run again Qua and this senior group are going to be a big part of it too. It’s just that ripple effect and it’s just exciting to be a part of it right now. I just hope it keeps going for awhile.”