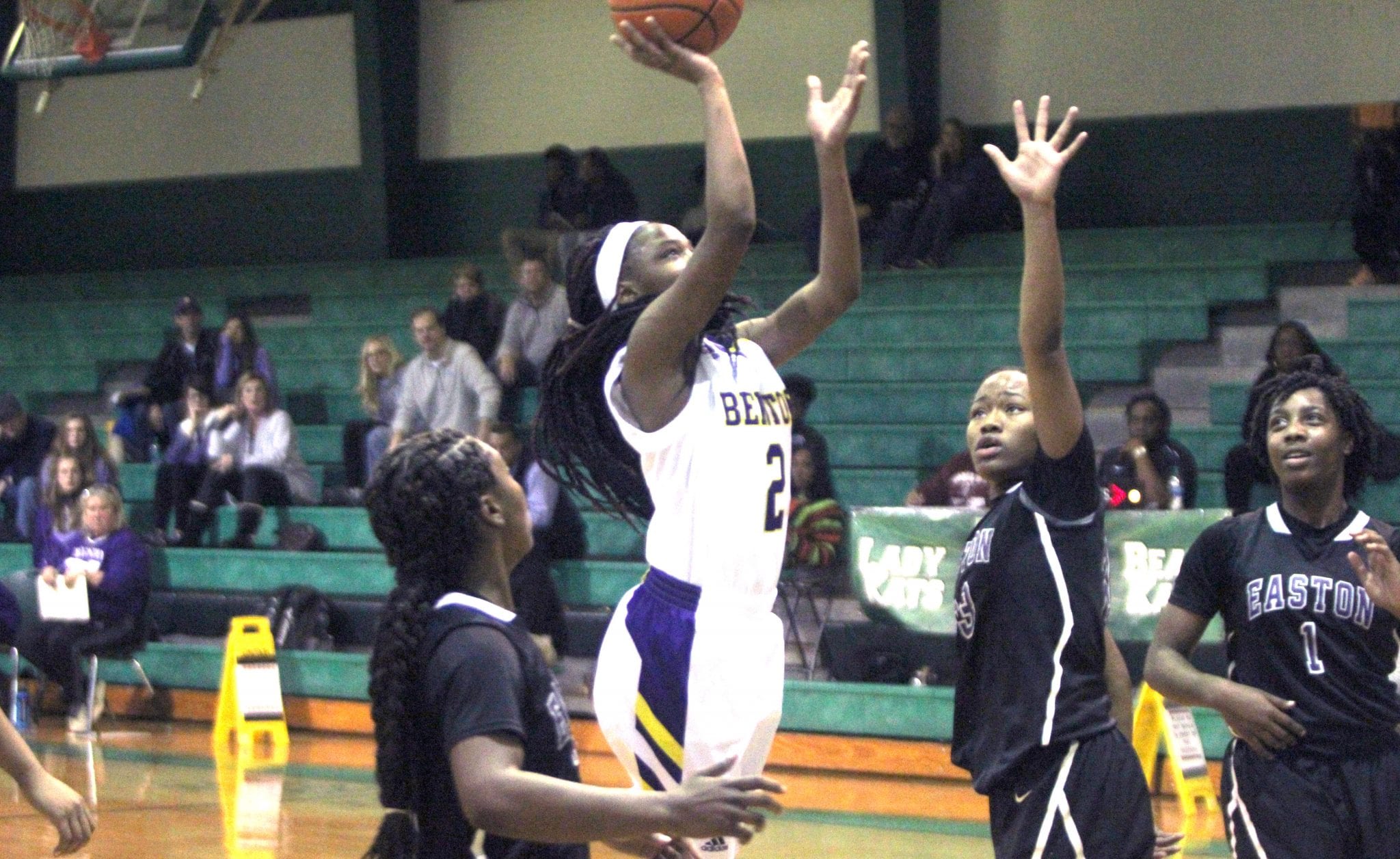 In February, Warren Easton ended the Benton Lady Tigers’ 2017-18 season in the Class 4A semifinals in Alexandria and went on to win the state championship.

Friday night in the Battle on the Hardwood Classic at Bossier, Benton got a little revenge, rallying from an eight-point deficit in the third quarter to defeat the Lady Eagles 45-43.

Benton coach Mary Ward was excited for her players, most of whom experienced last season’s defeat. But she kept things in perspective.

“It’s November,” said Ward, whose team improved to 3-0. “That’s going to be a totally different team. One of their best players tore her ACL. I think more than anything it was a great win because it hurt last year when we lost. If anything it made them feel a little bit better, but I think they realize they’ve got a lot more improving to do, especially free throws.”

Easton has been without 5-foot-11 senior forward Kiana Anderson, the MVP of the state championship game, who tore her ACL during a summer game. She made the trip north with her team and could return in time for the playoffs in February.

But even without Anderson, Easton is a formidable team, especially with their defensive quickness.

The Lady Eagles led 18-10 after a quarter and 25-18 at the half. At the end of the first- and second quarters, steals led to buzzer beating baskets, including a 3-pointer.

The Lady Tigers, though, used a trap defense to force turnovers and get back in it in the third quarter. Benton got within 25-24, but Easton went on a 7-0 run go up 32-24. The Lady Tigers then ended the quarter with a 7-0 run of their own and trailed 32-31 going into the fourth.

“Last year, when teams would go on a run, we would usually counter back and there was one time we didn’t counter back and it was the semifinal game,” Ward said. “I’m just proud of them. When they want to turn up the heat they can turn it up.”

Benton briefly tied the game at 33 early in the fourth quarter. But Easton answered again and led by six with just over four minutes to play.

Benton rallied to tie it at 41 with just over two minutes to play. Emily Ward nailed a 3-pointer to give the Lady Tigers a 44-41 lead with 1:40 to play. The Lady Eagles quickly cut it to one with a steal and layup.

Benton’s Jada Anderson made one of two free throws with 23.8 seconds left. Easton looked for an open shot but the Lady Tigers played good defense. Finally, Cabria Lewis drive inside the lane and missed an off-balance scoop shot.

Ward and Qua Chambers led Benton with 17 points each. Ward scored nine in the fourth quarter. Chambers scored six, including a 3-pointer, in the third.

Casey Harris led Easton with 14 points, including 12 in the second half. Breanna Sutton scored 12.

The competition doesn’t get any easier for Benton on Saturday, the event’s fourth and final day. The Lady Tigers face defending Class 2A champion North Caddo in the finale scheduled for 8 p.m. The Lady Rebels defeated Easton 59-52 Thursday.

In other Battle on the Hardwood games Friday involving parish teams, Parkway edged Rayville 55-54 at Rusheon and Bossier fell to Natchitoches Central 51-30 at Bossier.

Sophomore Sh’Diamond McKnight led Parkway with 29 points, including four 3-pointers. She scored 16 in the first half to help the Lady Panthers take a 35-27 lead.

Rayville rallied within two after three quarters. McKnight scored 10 of Parkway’s 13 points in the fourth.

Yazmeen Joseph added 12 points in the game and Jada Hardy had eight.

Saturday, Parkway (2-1) suffered its first loss of the season 54-51 to defending Class 1A state champion Delhi.

McKnight led the Lady Panthers with 28 points. She is averaging 30.3 points in the first three games.

McKnight scored hit two 3-pointers and scored 12 points in the second quarter and Parkway led 31-21 at the half. But Delhi rallied in the second half, outscoring the Lady Panthers 33-20.

Parkway hurt itself at the free throw line, making only six of 26 attempts.

Here is the remainder of Saturday’s schedule at Bossier.