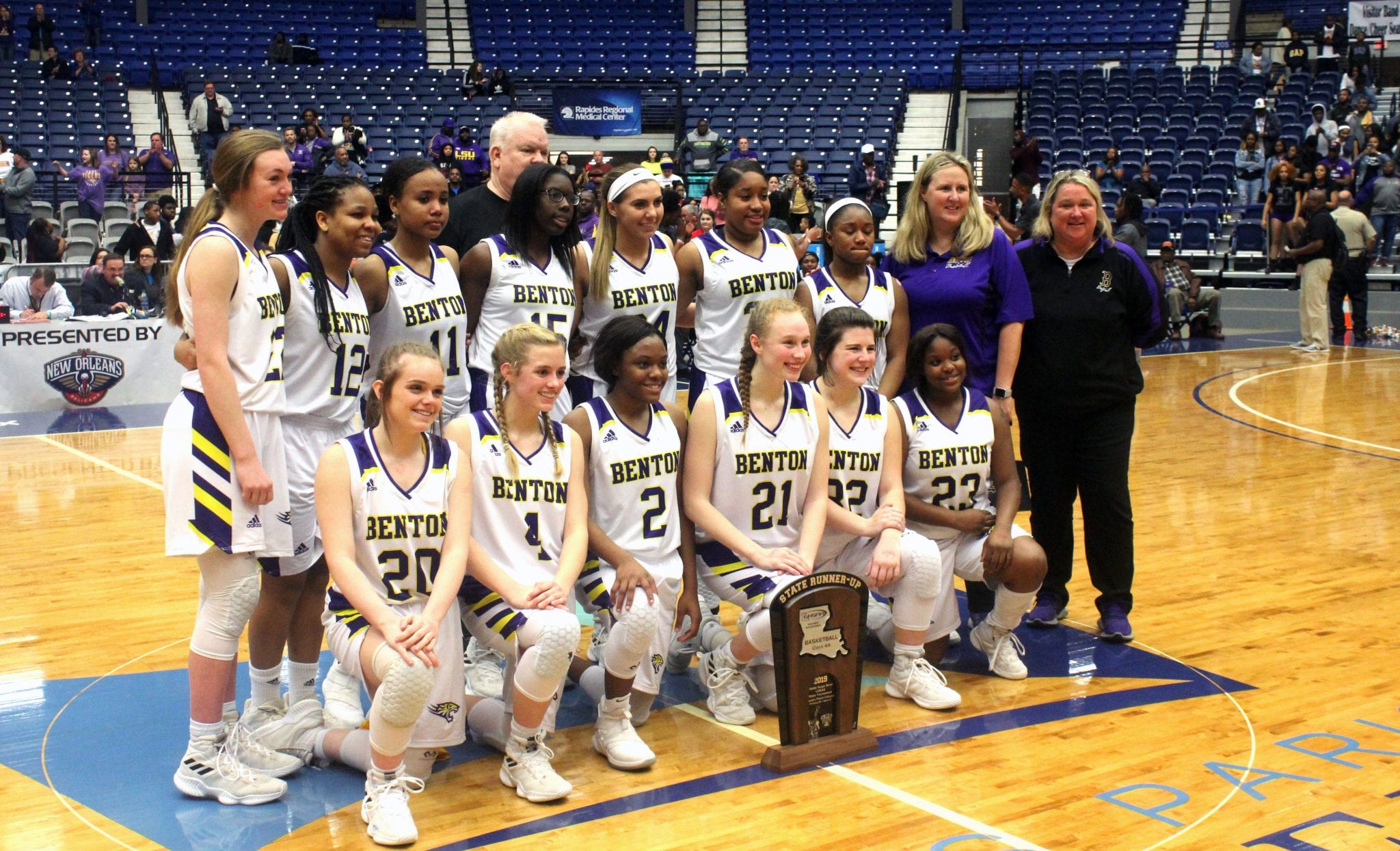 There’s no doubt it’ll take awhile for the sting of Friday night’s 58-49 loss to Warren Easton in the Class 4A state championship game in Alexandria to wear off for the Benton Lady Tigers.

But when it does, they’ll realize what an incredible season it’s been.

“So if you talk 2019 if you ever do and and say who were the beat teams in the state by gosh Benton High School is one of those,” Benton head coach Mary Ward said. “We didn’t win that trophy but we showed we can play with anybody in the state.

“If you look at our team, where’s our big post players? We’re just fundamentals. We play with heart and that shows. Sometimes heart wins games and that’s what these girls are. They’re just awesome.”

Warren Easton, the No. 2 seed, finished 32-5. The Fighting Eagles defeated Benton 64-54 in the semifinals last year en route to the title. Early this season, Benton won 45-43 in the Battle on the Hardwood at Bossier.

“I think if we played that team again we’d just continue to split back and forth,” Ward said. “They just happened to beat us on the night that it counts.”

The nine-point margin of victory was deceptive. The Lady Tigers dug themselves a big hole early, falling behind by as many as 15 points in the second quarter.

But they came all the way back to tie it at 31 on a Qua Chambers’ 3-pointer with about 4:30 left in the third quarter.

That sent the Benton fans into a frenzy.

But Warren Easton quickly quieted them for a short while with a 6-0 run. The Lady Tigers made several charges down the stretch, cutting the lead to two with just over a minute left.

“We just couldn’t get over that little hump,” Ward said. “There at the end when we started nipping away we made some crucial turnovers and that’s what cost us the game.”

After the Fighting Eagles’ early success, Benton went on a 9-0 run and trailed just 27-22 at the half.

“I think in the beginning we came out a little sluggish,” Ward said. “We tried to do our little zone defense because that’s kind of what’s worked for us all year. We had some shots in the beginning that just didn’t fall, little bitty chippers.

“Then we decided to turn up the heat a little bit and we kind of realized they didn’t like it when they had a lot of pressure on them and we created a lot. I think that second quarter we made a comeback.”

From the time they trailed by 15 to the 39.6-second mark of the fourth quarter when it was still a two-point game, Benton outscored Warren Easton 43-30. But as any coach will tell you, it’s a 32-minute game.

“I think at the beginning we were really working on trying to be patient and a little bit of being patient kind of took us out of things because we’re a full-throttle team,” Ward said.

In the second quarter, Benton began to have success against Easton’s press and that helped pick up the pace.

Chambers, a junior, led Benton with 22 points, including two 3-pointers. She was relentless driving to the basket. She also had five assists.

“Qua’s unbelievable,” Ward said. “Qua’s a baller. She’s had a phenomenal tournament. She was ice the other night (in the semifinals against Ellender). She came out on fire and played with a lot of intensity. That’s what Qua does.”

Because of the injury, Ward wasn’t at 100 percent. Mary Ward said that Emily’s ankle was swollen and looked “pretty huge.” But that didn’t stop her for fighting for every loose ball and doing everything in her power to give the Lady Tigers a chance.

“I would’ve liked to have had a 100 percent Emily Ward,” Mary Ward said. “I think that would’ve made a difference. But that’s how basketball goes.

Senior starting forward Abbie Wynn also was a major contributor to Benton’s success for four years, mainly with her rebounding and toughness underneath the basket and ability to take charges.

The only other seniors were Abby Hines, who contributed to a lot of wins this season, and reserve Karmeisha Bradley.

Wynn, Chambers and Anderson, a junior guard who was a big factor in breaking Easton’s press, joined Mary and Emily Ward at the postgame press conference.

At the conference, Mary Ward said that while Emily is of course her real daughter, the rest of the Lady Tigers are her “basketball daughters.”

“All four of these girls right here, I’d take them any day,” Mary Ward said. “It has been so much of a joy to coach these girls. This is a coaches’ dream. They have made my coaching days very special and I will never forget this group of young ladies and what they’ve accomplished this year.”

Emily Ward said playing with Wynn and the rest of her teammates has been an “unbelievable” experience.

“They’re all very athletic on the court but they’re also awesome off the court,” she said.

Warren Easton’s Cabria Lewis, a quick guard who led the Fighting Eagles with 22 points, was named the game’s MVP. She did most of her scoring damage in the second half.

Breanna Sutton added 16 points. She and Lewis were a combined 10 of 12 at the free throw line.

Despite being at a distinctive height disadvantage, the Lady Tigers outrebounded the Fighting Eagles 37-35. Chambers led the team with nine. Anderson and Ward had seven each while Wynn had five.