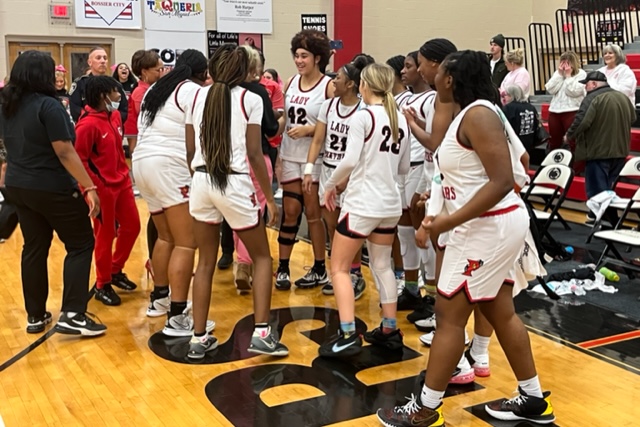 Parkway junior Mikaylah Williams keeps a list of goals on her bathroom wall.

At the top is “5A state championship.”

Saturday night in Hammond, the Parkway Lady Panthers will have a chance to achieve that goal.

“It means a lot,” Williams said in the press conference  after scoring 33 points in a 55-54 victory over No. 3 Lafayette in Thursday’s semifinals. “All these goals on this list. And I think this 5A state championship is the top one, the first one. I have it on my bathroom wall. There’s a goal on there that say 5A state champions. I’m just ready to check it off.”

The Lady Panthers have already made school history by becoming the first Parkway team to reach a state championship game.

Of course, they want to make some more.

“Just to know that we are the first, if I’m not mistaken, the first to make it to the championship game, that’s phenomenal.”

For the second straight game, the Lady Panthers will be facing a team they defeated in the regular season. Parkway defeated Ponchatoula 60-35 in the West Monroe tournament on Dec. 27.

But that means nothing now. You could say both teams are on a mission and looking for redemption.

Last year, Parkway was the No. 4 seed and Ponchatoula No. 1. Benton upset both, the Lady Panthers in the quarterfinals and the Lady Wave in the semifinals. The latter was Ponchatoula’s only loss of the season.

The Lady Wave knocked off No. 1 seed Walker 68-59 in the semifinals after rolling to a 21-point halftime lead.

Gloria Williams will be looking for a better performance from her team than in the Lafayette victory. The Lady Panthers had 23 turnovers, including two in the final minute that almost cost them the game.

“We didn’t play so well, but when you can still get a W and not play so well and learn from those mistakes then that’s what we’re looking forward to,” she said.

“We’ve got some work to do if we’re going to come in and win this thing on Saturday, and we know that. So we’re going to adjust to those things we did wrong tonight and fix them for Saturday.”

Williams, a finalist for the Jersey Mike’s Naismith National Player of the Year, has gotten a lot of attention and deservedly so. But she gladly took the opportunity to praise her teammates Thursday night.

“They’ve locked in and worked hard with me,” she said. “There have been some games where I’ve been real, real low and Chloe (Larry) would have my back and JJ (Jayla James) or Lucy (Henderson) so all I can do is appreciate them for having my back and I’ll have theirs too.”