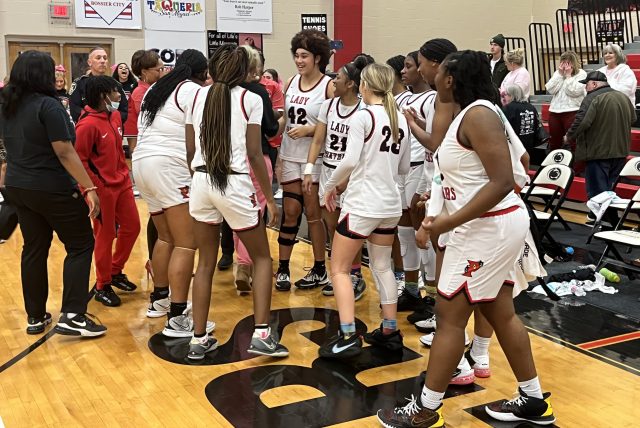 What a difference a year has made for the Parkway Lady Panthers.

Last year, there was disappointment and heartache after an upset loss to Benton in the quarterfinals of the Class 5A playoffs.

Thursday night, there was nothing but happiness and joy.

A year after watching another team celebrate on their home court, the Lady Panthers got to do the celebrating.

Amid loud cheering, players and coaches climbed a ladder and cut down the net after an 82-41 victory over the No. 10 seed Northshore Lady Panthers in the Class 5A quarterfinals.

Parkway (32-2), the No. 2 seed, will play No. 3 Lafayette (29-4) next week at the state tournament, also known as Oschner LHSAA Marsh Madness, at the Southeastern Louisiana University Center in Hammond.

“It feels great,” said sophomore guard Chloe Larry, who jumpstarted the Lady Panthers with three 3-pointers in the first quarter. “It’s the best opportunity ever.”

Larry finished with five 3-pointers and a game-high 31 points.

“It’s just exciting that I get to be on the opposite side of that,” said Williams, who scored 25 points.

Parkway junior guard Makenna Miles wasn’t on the court last year with her current teammates. She moved to Bossier City from Cleveland, Tenn., where she played for Bradley-Central High School.

Miles said her team was in a similar situation as Parkway’s last season.

“We were almost there,” she said. “This feeling is just amazing.”

Gloria Williams, in her sixth season as head coach, said she is proud of what her players and coaching staff have been able to accomplish so far.

Parkway got off to a bit of a slow start. The Lady Panthers from Slidell took a 5-1 lead. About halfway through the first quarter Parkway had just three points.

But then Larry hit her first shot from behind the arc and the Lady Panthers from South Bossier led 6-5. Northshore regained the lead with a 3-pointer, but Parkway answered with an 8-0 run to end the quarter on top 14-8.

Parkway scored the first four points of the second quarter to take an 18-8 lead. Northshore then looked like it might make a game of it, scoring five straight to cut the lead to five.

But Northshore also got into some early foul trouble and Parkway took advantage, closing the first half with a 15-0 run for a 33-13 lead.

“I just don’t think we were locked in,” said Mikaylah Williams, who scored 11 in the second quarter. “As soon as we were locked in and started working hard defensively it translated to the offense.”

Parkway continued to roll in the third quarter. Larry scored eight and Williams seven as the Lady Panthers extended the lead to 54-20.

The 31 points was a career-high for Larry.

“I had the opportunity and I was just hitting,” she said.

“She had a phenomenal game, offensively and defensively,” Gloria Williams said.