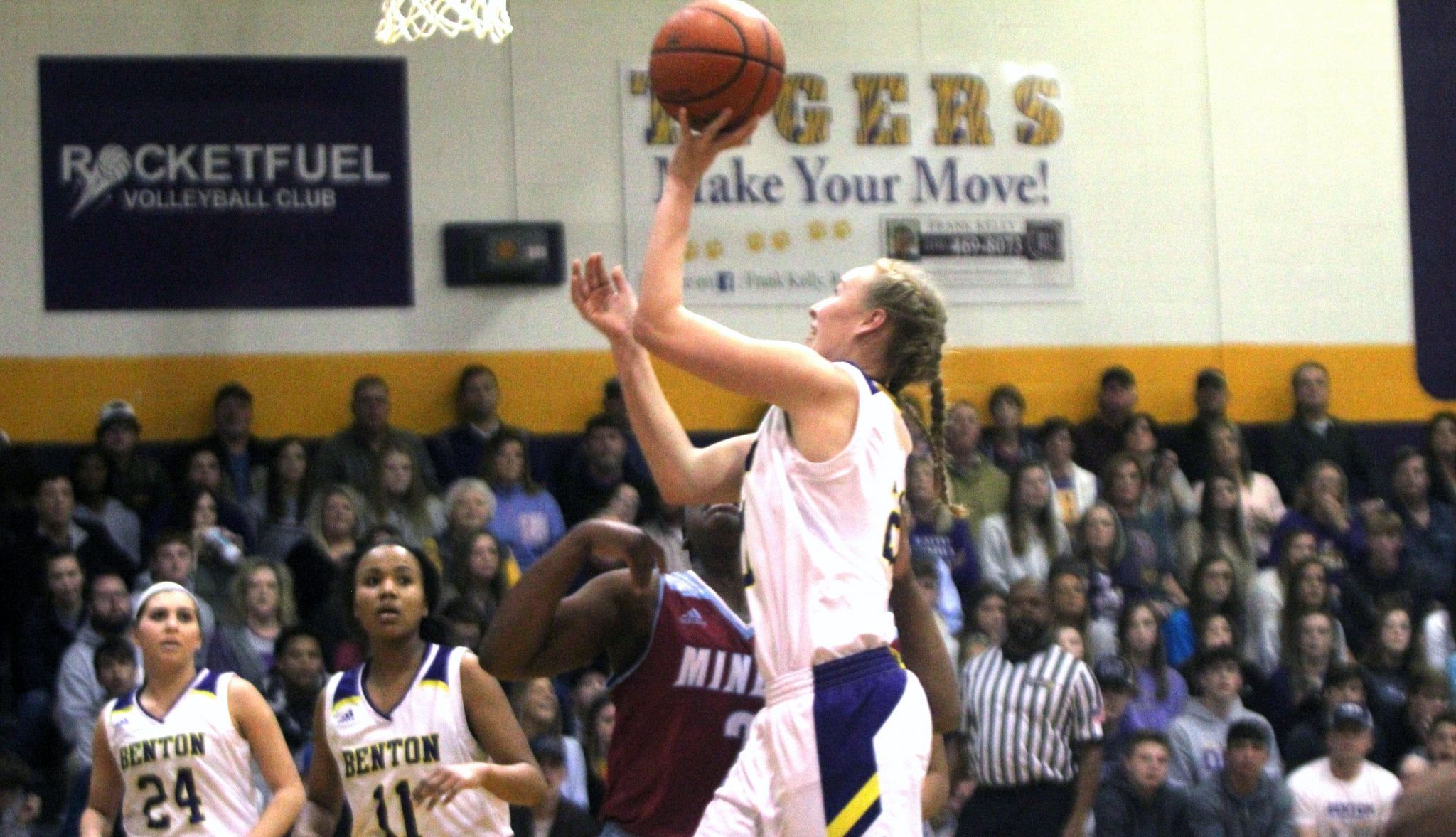 Benton senior Emily Ward had a big game, one of many in her career, against the Minden Lady Tiders on Friday night, scoring 27 points and hitting several clutch free throws down the stretch.

While Benton coach Mary Ward acknowledged the significant contributions of her daughter, she said her role players deserve a lot of credit for the Lady Tigers’ 52-45 District 1-4A victory at Benton.

“Man, it’s those other kids that step up,” Ward said. “Dana Wainwright hitting those side shots and Alisa Harris coming in with Abbie Wynn having a concussion.

“They are kind of like the offensive line in football. They don’t get a lot of credit but man what they do is so important.”

Wainwright scored nine big points, including a key fourth-quarter basket as Minden was making a run. Harris saw significant action in place of veteran forward Wynn, who suffered a concussion against Booker T. Washington on Jan. 4.

A capacity crowd befitting a No. 1 vs. No. 2 battle was on hand.

While it was obviously mostly pro-Benton, there was a large and loud contingent supporting the Lady Tiders.

The Minden fans got very loud in the fourth quarter. With the Lady Tigers going suddenly cold, the Lady Tiders went on a 9-2 run to get within two with 3:40 left.

Mary Ward said she wasn’t surprised Minden made a run. She quoted her assistant coach, Richard Cox, who was the head coach at Airline when Ward led the Lady Vikings to a state title.

“He still says some of the same things,” Ward said. “Basketball is a game of ups and downs and the key is you have to survive it when you’re down and try to get it to turn and get back up.  That was one of the things on our gameplan, expect them to go on a run, and we just had to survive it and that’s what we did.”

The Lady Tigers were able to extend the lead back to five a couple of times. Minden’s Destini Powell hit a 3-pointer to make it 45-43 with 1:50 left.

It was still a two-point game with 38 seconds left. Qua Chambers made one of two free throws to put the Lady Tiders ahead 48-45.

The Lady Tiders missed a 3-pointer and the ball went out of bounds to Benton. After a time out, Ward was fouled with 18 seconds left and hit two free throws for a 50-45 lead.

Benton avenged a 50-44 loss to Minden on Dec. 29 in the semifinals of the “Doc” Edwards Invitational. The Lady Tigers were unable to overcome a big third-quarter deficit.

“Last time we played them we didn’t shoot that well and a lot of that is a credit to them and their defense, but we really worked on a couple of things, a lot more individual stuff,” Mary Ward said.

Both teams played well early. Ward scored nine points and Jada Anderson hit a 3-pointer in the first quarter.  Minden’s Bre Rodgers scored seven of her team-high 18 in the quarter and Benton led 16-14.

The Lady Tigers got a little separation in the second quarter thanks to some solid defense and led 27-21 at the half.  Anderson hit another 3 and Ward scored six to finish the first two quarters with 15.

The defensive struggle continued in the third quarter. With Wainwright scoring five, the Lady Tigers extended the lead to 38-29. Minden had only one two-point field goal in the quarter to go with two 3s.

That set up a drama-filled fourth quarter as Benton withstood the Lady Tiders’ rally.

“All the credit goes to these girls,” Mary Ward said. “They’re just really good kids. They want what’s best for each other. Some times I have to get on them because they pass too much and that’s kind of unheard of in today’s time.”

Powell scored 14 points, including two 3-pointers in the fourth quarter and four in the game.  Forward Derrica Gilbert, who had 19 points in the Dec. 29 victory, scored eight.

The two teams meet again on Feb. 5 in Minden.