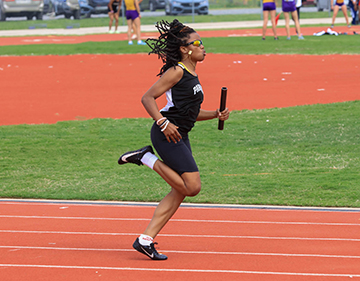 It was only a fifth-place finish but it was big for the Parkway Lady Panthers.

The finish in the 4X400-meter relay, the final event of Thursday’s District 1-5A meet at Benton’s Tiger Stadium, netted the Lady Panthers two points.

With Benton getting four points for finishing fourth, the fifth-place finish gave Parkway the district championship for the second year in a row.

Benton finished less than a second behind third-place Byrd.

Of course, the 4X400 just happens to be the last event. A different finish in any of the other events could’ve altered the outcome.

While there were some, posting outstanding times and distances took a backseat to qualifying for Wednesday’s Region I-5A meet at Northwestern State. The top four individuals and relay teams in each event qualified.

Before running the hurdles events, Willis took the long jump with a leap of 16 feet, 10.5 inches and triple jump with a 34-5. It was only her second time to compete in the latter event.

Taylor also finished second in the 200 in 24.76, just .04 behind Southwood’s Rondisia Williams.

Parkway junior Mikaylah Williams won the discus with a throw of 125-9. That was almost nine feet farther than her second-place throw in the Class 5A state meet last year.

The foursome of Maya Jackson, Kennedi Lee, Jillian Walton and Kyla Williams ran a 48.24 in the 4X400, .69 faster than Southwood.

Airline’s Arriana Hill continued her domination of the high jump, winning with a leap of 5-2, 1 inch higher than Parkway’s Ty’lissa Henderson.

Airline’s Jessie Frank also posted another victory in the pole vault. She cleared a season-best 10-0. Benton’s Addyson Hulett was second with a 9-0.

Parkway sophomore Chloe Larry captured the javelin with a season-best 121-4.

Benton’s Sadie Hamby finished second in the javelin with a season-best 109-9 and the discus with a 110-0.

Parkway’s Jackson finished second in the triple jump with a 34-1, 3.5 inches shorter than Willis.

Haughton’s Dakota Howard took second in the long jump with a 16-3.5, 6.5 inches shorter than Willis.

The Haughton team of Beautiful Abney, Tykiarre Abney, Ah’Naiya Green and Howard took third in the 4X100 relay in 50.71,

The Benton foursome of Taylor Rochelle, Allie Maranto, Havyn Puckett and Pepp finished third in the 4X200 in 1:48.32.

The Benton foursome of Rylie Emerson, Emmalyn Burns, Halle Hassett and Jenevieve Willis was third in the 4X800 in 11:34.18.

The Parkway team of Laila Brimmer, Ariel Morrow, Lauren Taylor and Landry Johnson finished fourth in the 4X800 in 12:28.23.