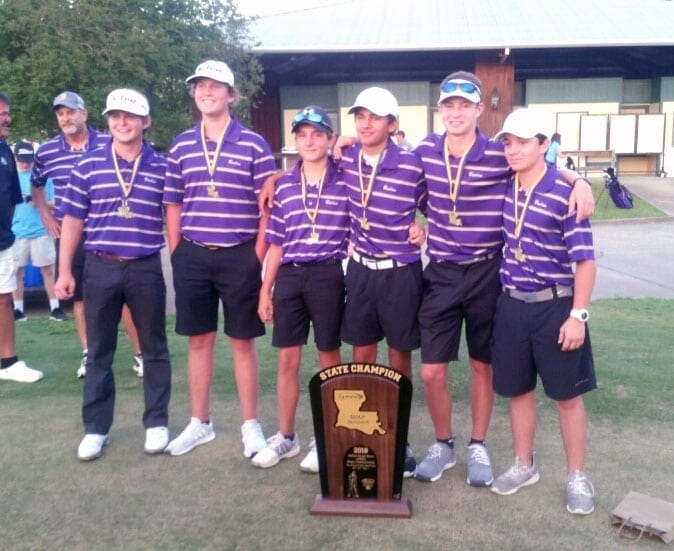 The Benton Tigers are back on top.

A year after seeing their run of five straight titles end, the Tigers won the Division II state championship Tuesday at The Farm D’Allie in Carencro.

Benton shot a 333 in the second round and finished with a two-day total of 660, six strokes better than runner-up St. Thomas More. The Tigers trailed the Cougars by one stroke after Monday’s first round.

Benton senior Hayden White finished his outstanding high school career in style. The LSU signee won the individual title by two strokes over St. Thomas More’s Matt Weber. The two were tied for first after the first round.

White shot a 1-under 71 to go with a first-round 70 and finished 3-under for the tournament. He carded 13 birdies over the two rounds. Weber shot a 73.

White’s high school resume is impressive. He was the Division II co-champ in 2016 and tied for fourth in 2015 as a freshman. White had to withdraw after the first round last year because of an illness.

“He’s rock solid. He’s as good a golfer as I’ve ever had come through and I’ve had some good ones. He ranks right up there with the best of them if not the best. He’s the only two-time state champion I’ve ever had so that puts you in the top right there. He’s pretty phenomenal.”

Of course, Benton could not have won the title without the contributions of White’s teammates.

Cram said the Tigers weren’t at their absolute best, but they didn’t have to be. All they had to be was two strokes better than St. Thomas More. St. Louis Catholic, who posted the day’s best score of 330, was a distant third going into the second round.

Benton did just that as the young Tigers came through under pressure despite some hiccups here and there.

“I’m going to honest with you,” Cram said. “We’ve got three freshmen, a junior and a senior in the top five. I told them that’s the same thing as in 2012 when we started that run.

“The freshmen, they’re young and have some learning to do. They struggled today, but they never gave up. They kept fighting. A stroke here or a stroke there is what was big, and I know they’ll tell you they didn’t play their best but they fought, and man they came through in the end. We ended up winning because they just stayed with it.”

The chase for individual medalist was a duel between White and Weber. Third-place Austin DeReese of Westlake finished 15 strokes behind Weber.

White led by one shot going into the final hole, a par-5. Weber hit his second shot on the back edge of the green.

St. Thomas More is located in Lafayette, a few miles from Carencro, and Weber had a big following.

“Everybody was whoopin’ and hollerin’ because he had an eagle chance,” Cram said.

White then put his second shot within about 12 feet. He two-putted for a birdie and the two-stroke victory.

White quickly went two shots down when he bogeyed the first hole and Weber made birdie. But he got it going on No. 4, starting a run of three straight birdies.

White added another birdie on eight. He finished the front nine with a bogey and was 2 under at the turn.

Meanwhile, Weber struggled through the middle holes on the front nine but rallied with birdies on eight and nine for a 1-over 37.

White went to the 10th with a three-stroke lead at 4 under for the tournament. Weber continued his hot streak with birdies at 10 and 11. White matched him with a birdie at 11.

White bogeyed 13 and Weber made par, cutting the lead to one. Both players bogeyed 14. Weber bogeyed 16 and White’s lead was back to two with two holes to play

White bogeyed No. 17 while Weber made par, setting up the dramatic finish on 18. As he has so many times before, White rose to the occasion.

The same can be said for the rest of the Tigers, state champions again.