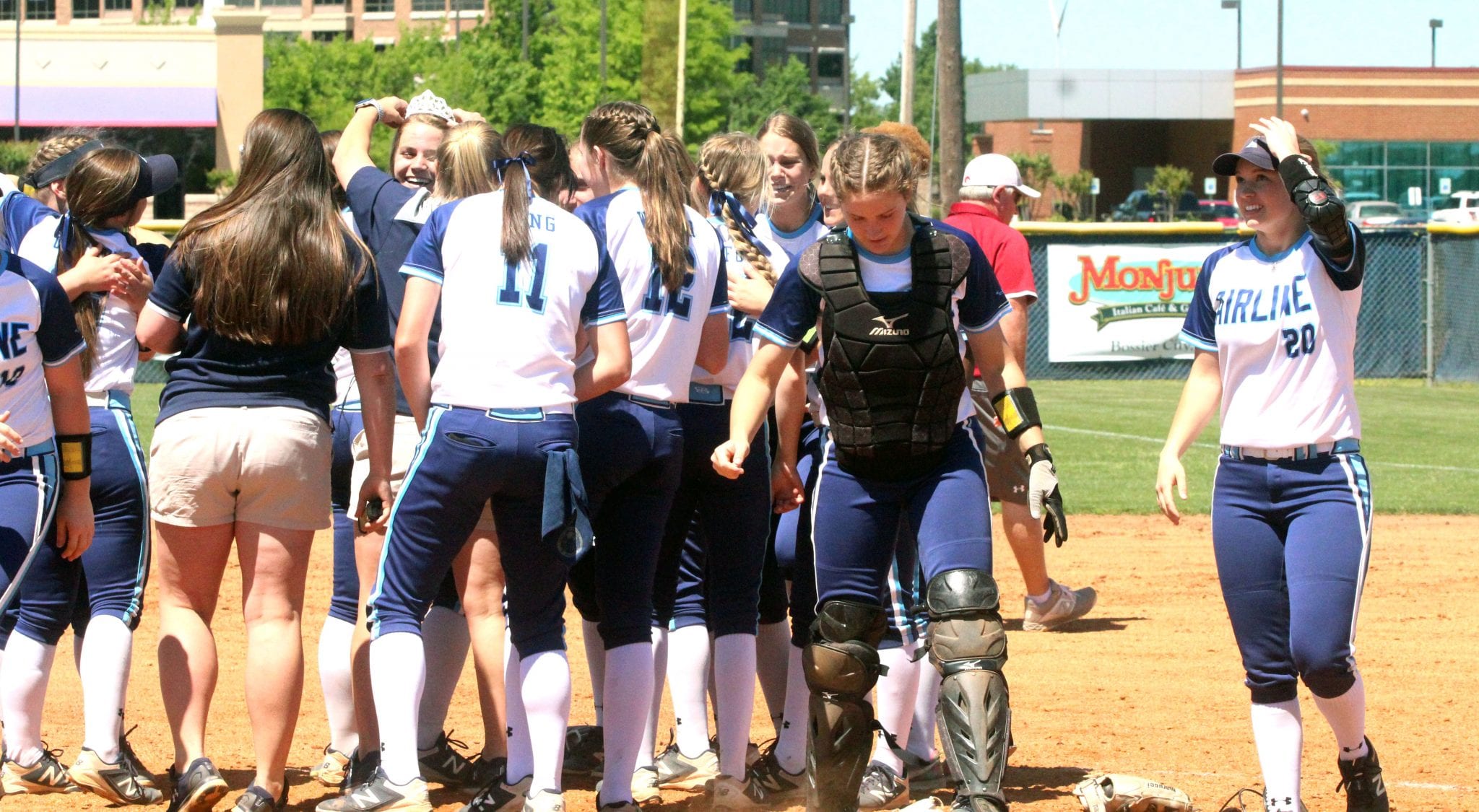 For Airline softball coach Regina Digilormo, it’s about finding a way to win.

The No. 2 Lady Vikings defeated the No. 23 Destrehan Ladycats 1-0 in the quarterfinals of the Class 5A playoffs before a large crowd on a beautiful Saturday afternoon at Airline.

Airline (28-3) will face No. 3 seed Barbe, a 6-2 winner over No. 6 Denham Springs, in the semifinals Friday at the Allstate Sugar Bowl/LHSAA Softball State Tournament in Sulphur.

It will be Airline’s first semifinal appearance since 2007 when the Lady Vikings were state runners-up.

In Tuesday’s second-round game, the Lady Vikings rallied from three runs down after six innings to defeat Alexandria Senior High 6-4 in eight innings.

Saturday, outstanding pitching by sophomore Raelin Chaffin and a home run by senior Maddie Ennis made the difference.

The victory was Airline’s second over Destrehan this season. The Lady Vikings won 9-0 in the St. Amant tournament on March 23, but Digilormo wasn’t surprised Saturday’s game was closer.

Destrehan reached the quarterfinals with upsets over No. 10 Mandeville and No. 7 Northshore.

“I’m just very, very happy and proud of these girls,” Digilormo said. “Sure it was a little nervewracking, but there was no doubt in my mind that this team would find a way to win.

“Last  game we found a way to win.  There have been multiple opportunities throughout this season that we have found ways to win.”

She led off with a home run in the bottom of the fourth. Ennis sent an 1-0 pitch flying over the center-field fence.

“Right when I got up to bat I just knew I had to do it for my team,” Ennis said. “Raelin was throwing an amazing game.”

Chaffin, who committed to LSU before her freshman season, pitched a two-hitter. She struck out 11, including nine of the last 10, and walked only one.

Chaffin admitted to having a small case of the nerves pitching in a quarterfinal game.

“In the beginning I was a little rattled,” she said. “A quarterfinal game is a little nervewracking. But once Maddie got the hit I was really confident.”

Chaffin’s counterpart, Destrehan pitcher Tyler Oubre, was almost as effective. She allowed five hits, struck out five and walked none.

Ennis’ homer is the only run Oubre allowed in three playoff games.

Digilormo said Ennis’ homer was simply a player taking advantage on an opportunity in front of her.

“When we got runners on it was tough to get timely hits, but that was a really timely hit when we needed it to be,” she said. “And that makes the  difference. You have to be ready to execute on those pitches.

“Like I told Maddie — I told all the girls — she’s going to throw you one so don’t foul it off. Hit it.”

Ennis admitted that playing her final home game was somewhat bittersweet. Of course, the home run and the victory made it much more sweet than bitter.

Destrehan (16-17) mounted a serious scoring threat in only one inning.  The Ladycats had runners on second and third with two outs. But Chaffin induced a popup that her sister, second baseman Makenize, ran down near first base.

Airline junior shortstop Caroline Easom had two hits. Freshman third baseman Jina Baffuto and Makenzie Chaffin had one each. But the Lady Vikings weren’t able to capitalize on any of them.

In the end, that didn’t matter. Only the W did.

“We knew it was going to be tough,” Digilormo said. “But that’s all we need to do, find a way to win. That’s all that matters.”

Digilormo said while she’s thrilled to be taking the Lady Vikings to Sulphur for a second straight year with a chance to win the state championship, she’s just as happy simply to be able to spend more time with them.

“It means so much to be going down to Sulphur again,” she said. “We set goals at the beginning of the season. There were a lot of things we did to make it happen, and I love high-pressure games like this because all it does is prepare you for high-pressure games in the future. So as nervewracking as it may be, I think it’s preparing us for something bigger.”