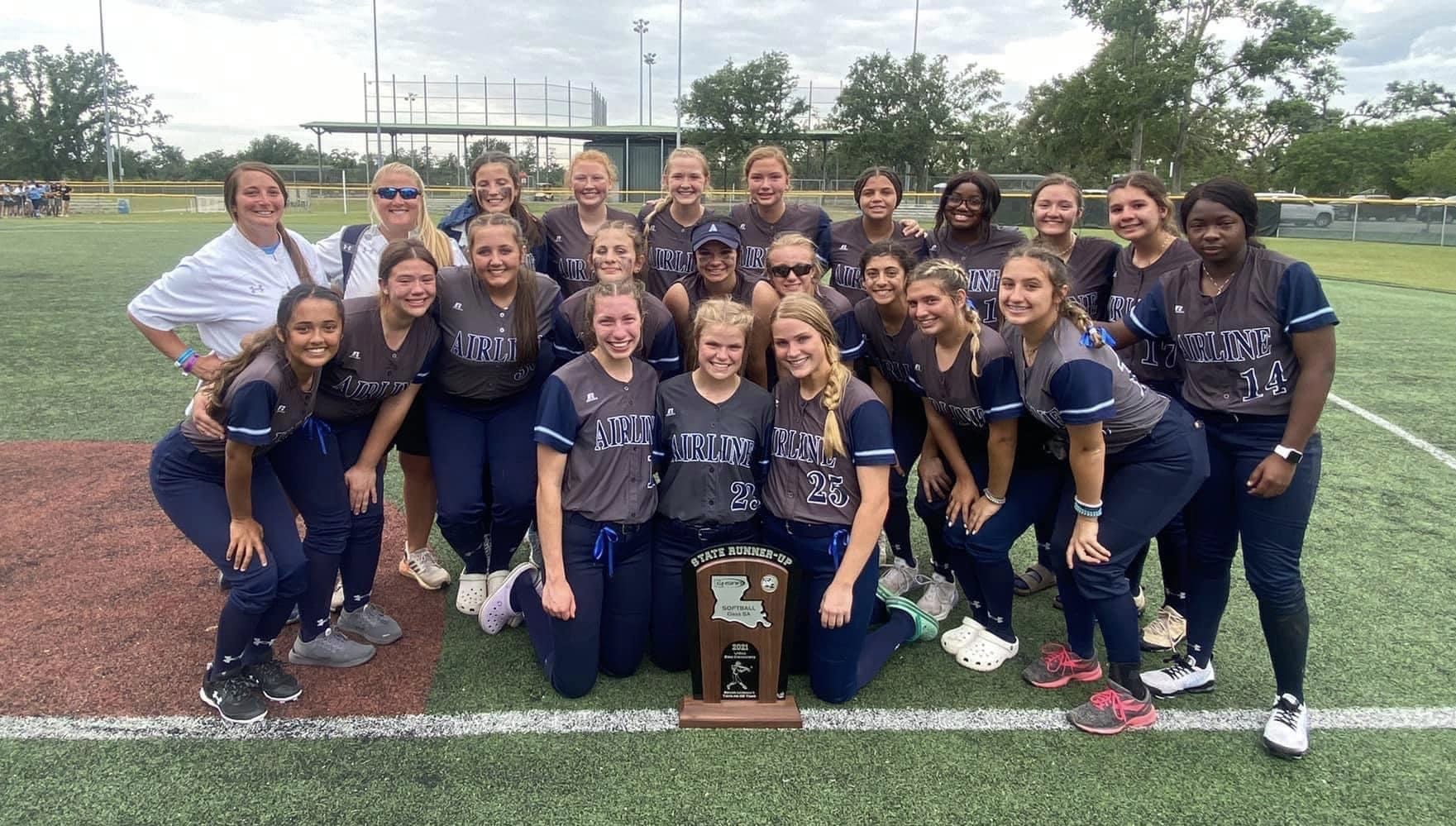 The Airline Lady Vikings gave it everything they had against Barbe in the Class 5A state softball state championship game on a dreary Saturday afternoon at Frasch Park in Sulphur.

But in the end, it wasn’t quite enough.

Airline led 1-0 through three innings, but Barbe hit two home runs in the bottom of the fourth. The result was a 3-1 lead and that wound up being the final score.

Barbe, the No. 3 seed, finished 31-2. Airline, the No. 5 seed, closed 20-6 in Brittany Frazier Smith’s first full season as head coach. Despite the loss, it was still a day to remember for the Frazier family.

Smith’s sister, Tiffany Frazier Wood, is the head coach at Calvary Baptist, and their dad, Greg, is one of her assistants. Earlier Saturday, the Lady Cavs defeated Catholic-Pointe Coupee 1-0 in eight innings in the Division IV championship game.

The loss did nothing to diminish Airline’s outstanding season. The Lady Vikings fought through some midseason adversity, including injuries to their top two pitchers, to claim a share of the District 1-5A championship.

Airline reached the state championship game for only the second time in school history.

It also took nothing away from the brilliant career of senior pitcher Raelin Chaffin, who is bound for LSU. Chaffin led the Lady Vikings to the quarterfinals in 2018, the semifinals in 2019 and the finals this season.

And who knows what might’ve been in 2020 had the second half of the season not been wiped out by the COVID-19 pandemic.

This season, Chaffin overcame some adversity of her own. She was unable to pitch for a three-week stretch because of an injury. She returned to the circle late in the regular season and helped Airline get a share of the district title. In four playoff games leading up to the title game, she allowed one run.

Barbe was the one thorn in Chaffin’s and the Lady Vikings’ side. The Lady Bucs handed Airline a heartbreaking 7-6 loss in the 2019 semifinals before losing to St. Amant 3-1 in similar fashion in the state championship game.

After two scoreless innings, including a brief rain delay in the first inning, Airline took a 1-0 lead in the top of the third.

Elena Heng, who went 2-for-4, singled with two outs. Paris Endris then hit a shot to center field. Heng came around to score as Endris slid head first safely into second.

The Lady Vikings had a chance to do some more damage in the fourth. Watson led off with a single and Kenzee Perry walked.

But Barbe ace Halie Pappion, who allowed six hits and struck out nine, closed the door. She induced a fielder’s choice, a strikeout and a popup.

The Lady Bucs then tied it on Nyjah Fontenot’s leadoff home run over the center field fence in the bottom of the inning.

After Alana Mark doubled with one out, Chaffin induced a popup for the second out. Madison Chretien then delivered the decisive blow. After fouling off a pitch, she hit the next one on a line over the left field fence, giving Barbe the 3-1 lead.

Barbe put two on in the fifth but Chaffin left them stranded.

Airline then had a golden opportunity in the sixth.

Paige Marshall led off with a single, and Perry singled with one out. But Pappion got a popup and strikeout to end the threat.