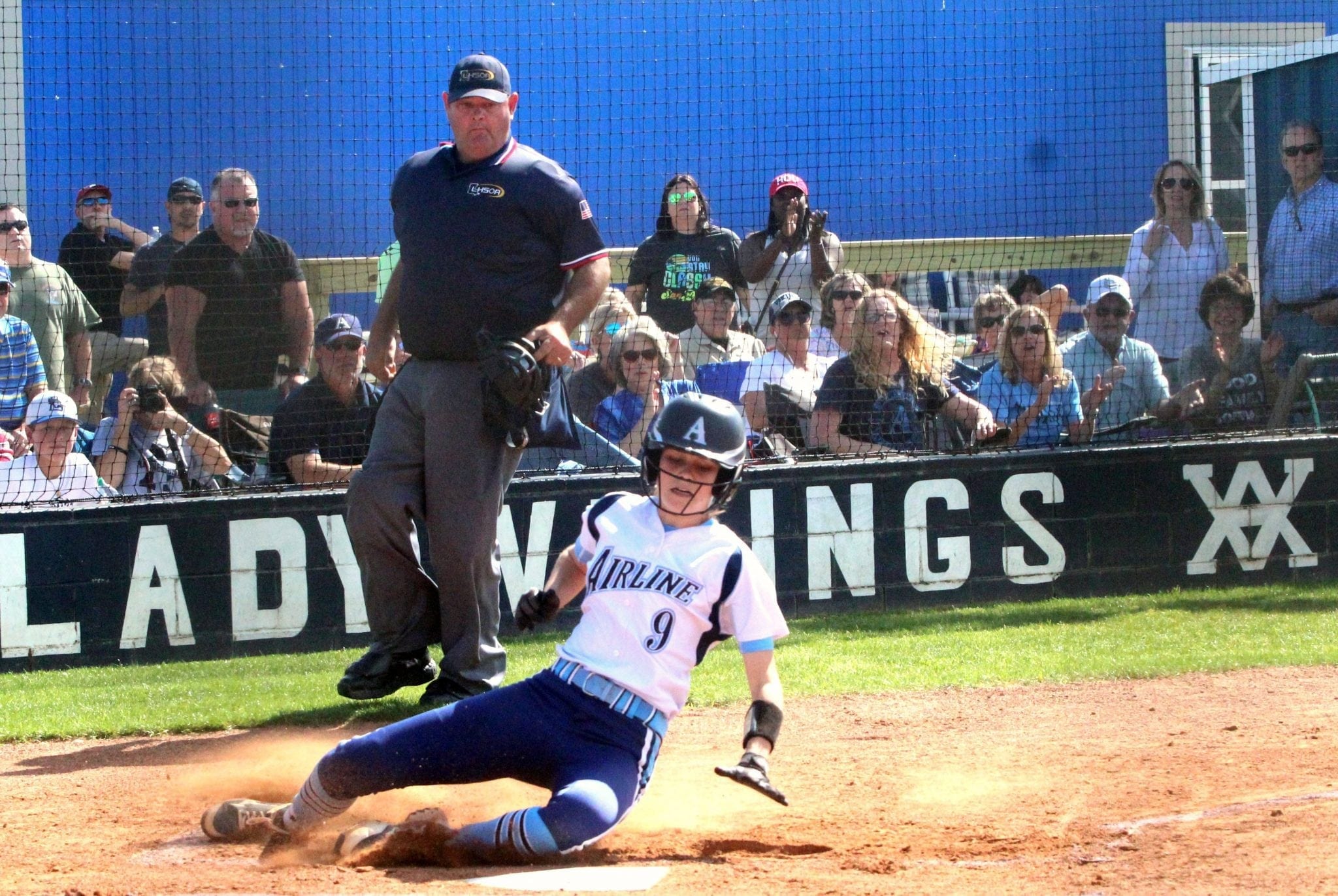 It took awhile, but the Airline Lady Vikings finally got to Hammond ace Jordan Moon in the first round of the Class 5A softball playoffs on a very windy Tuesday afternoon at Airline.

The Lady Vikings, who went hitless through five innings, had four singles in a three-run sixth en route to a 4-1 victory.

In another Class 5A first-round game, the Haughton Lady Bucs came close to pulling off a major upset. Haughton, the No. 28 seed, fell to No. 5 Mandeville 2-1 on the road.

In a Class 4A first-round game, No. 21 Benton also flirted with an upset before falling to No. 12 Buckeye 6-4 at Buckeye.

At Airline, the game turned into a pitchers’ duel between Airline freshman Raelin Chaffin, an LSU commit, and Hammond’s Moon, a Nicholls State signee.

Chaffin allowed only three hits. She struck out 16 and walked one. One of the hits was a leadoff home run by Moon over the center field fence that tied the game at 1 in the third inning.

The Lady Vikings were able to get their bats on the ball against Moon, who struck out five, but couldn’t get anything going against her until the sixth.

Molly Dickens, who hit the ball hard to center field in an earlier at-bat, led off the with a single to right field and advanced to second on Lexi Gray’s sacrifice bunt.

Makenzie Chaffin followed with a single to left field, scoring Dickens. After a popout, Brooklyn Brandon reached on a error and advanced to second on a ground ball. Chaffin scored on the error.

Airline scored an unearned run in the first inning. Makenzie Chaffin reached on a dropped third strike with two outs. She advanced to second on Jessica Baffuto’s sacrifice bunt and then came all the way around to score on a throwing error.

Haughton scored its run in the fifth. Reagan Jorstad walked, advanced to second on an error and reached third on McKayla Burkhart’s sacrifice bunt. She scored on Lauren Edwards’ sacrifice fly.

Haughton got a one-out single from Savannah Salley in the sixth but couldn’t advance her.

Shelby Hensley led off the second with a single. Jordan Brothers drew a walk with one out, putting runners at first and second. But O’Berry struck out the next two batters to end the threat.

At Buckeye, the host Lady Panthers broke a 4-4 tie with two runs in the bottom of the fifth.

Benton got off to a good start, scoring a run in the first inning. Ashley Hunter, who went 2-for-4 in the game, doubled and courtesy runner Joely Fletcher scored on an error.

The Lady Tigers took a 4-1 lead with three runs in the third.

Buckeye answered with three runs on three hits in the bottom of the inning.