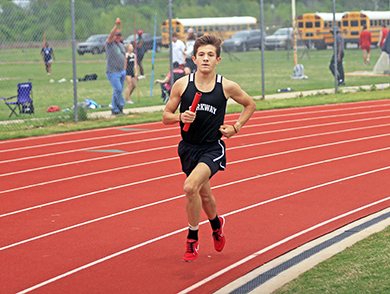 The Parkway Panthers won the District 1-5A championship by the slimmest of margins Thursday at Benton’s Tiger Stadium.

Parkway scored 108.5 points, a half-point ahead of runner-up Benton. Last year, the Tigers shared the championship with Captain Shreve.

Airline finished third, giving Bossier Parish teams a sweep of the top three spots. Natchitoches Central was fourth with 78.5 and Haughton fifth with 69.

The title was Parkway’s first since the school began competing in 1-5A in 2012.

The Panthers foursome of Jayson Williams, Gabriel Falting, Edward Moses and Will Achee won in 3 minutes, 28.43 seconds, 1.6 seconds ahead of Byrd, and Parkway tallied 10 more points..

The Tigers foursome of Austin Richard, Zacchaues Zeiglar, Mark Perry and Ashton Jordan finished fourth in 3:35.30, just .41 seconds behind third-place Byrd. The four points for the finish dropped Benton to second by the half-point margin.

Of course, the 4X400 just happens to be the final event. A different finish in any of the other events could’ve altered the outcome.

While there were some outstanding performances, the quest for personal-best times and distances took a backseat to qualifying for the Region I-5A meet Wednesday at Northwestern State. The top four individuals and relay teams in each event qualified.

Parkway also won the 4X800 relay, the first track event of the meet.

Airline’s time of 1:29.19 was a season and parish best. The Parkway foursome of Camaro Mayo, Greg Chitman, Williams and Will Achee was second in 1:30.26.

Boudreaux and Benton’s Perry both cleared 6 feet, 2 inches in the high jump. But Perry took first with fewer misses. Perry also qualified for the regional meet in the long and triple jumps.

Parkway’s Jaylan White finished second in the 100 in 11.03, .21 behind Captain Shreve’s Marquez Stevenson.

Haughton’s Laiden Broadway was second in the pole vault with a 13-0, just 4 inches lower than the school record he set last week. Natchitoches Central’s Sammy Maggio won with a 13-6.

Airline’s Jae’lon Shumake captured second in the shot put with a season-best 46-2. Captain Shreve’s Kaleb McHenry won with a 47-11.

Parkway’s Mayo was second in the long jump with a 20-7.5, just 2.5 inches shorter than Natchitoches Central’s Demarion Sowell.

The Airline team of Jefferson, Chavez, Boudreaux and Washington finished third in the 4X100 in 43.13.

The Haughton team of Trey Smith, Jaylin Ealy, Demetri Williams and Chris Mayes took third in the 4X400 in 3:34.89,

The Haughton team of Tyler Villarreal, Jason Zahm, Jared Allen and Carlos Obregon finished third in the 4X800 in 9:17.57.