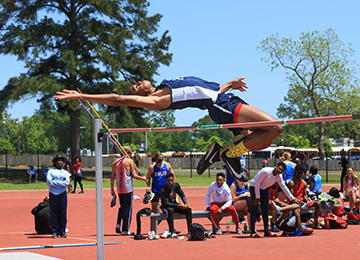 Taylor and Willis qualified for the Class 5A meet in three events each.

She went 1 foot, 3 inches farther than runner-up Karrington Eugene in the triple jump.

Sellers took the boys discus with a throw of 146-0.5. Parkway freshman Devon Oliver also qualified in the event with a 139-3.

Boudreaux won the high jump with a leap of 6-4. Benton’s Mark Perry and West Ouachita’s Jahzell Johnson both cleared 6-2. Johnson got the second-place spot because of fewer misses.

Four other parish athletes and two relay teams qualified in the girls division.

Parkway’s Jayla James finished second in the shot put with a toss of 35-9. Ouachita Parish’s Kimora Daniel won with a 37-4.

Parkway’s Mikaylah Williams, the Class 5A runner-up last season, was second in the discus with a throw of 120-5 1/2. Lafayette’s Reese Grossie won with a 132-0.

Airline’s Arriana Hill was third in the high jump with a leap of 5-2. Barbe’s Ariel Williams won with a 5-10, 2 inches higher than Ruston’s Craig.

Airline’s Jessie Frank, Benton’s Addyson Hulett and Sulphur’s Chloe Adams all had the third-best height of 9-0 in the pole vault. Frank took third because of fewer misses.

Parkway’s Chloe Larry had a season-best throw of 127-2 in the javelin. She finished fifth, 1-11 shorter than third-place finisher Mckenzie Davis of Barbe.

Five other parish athletes and four relay teams qualified in the boys division.

Parkway’s Jake Morton finished third in the shot put with a 47-2.5. New Iberia’s Jacalin Washington won with a 49-6 and Captain Shreve’s Kaleb McHenry was second with a 47-11.5.

The Parkway foursome of Gary Smith, Adrian Orellana, Gabriel Falting and Noah Fox finished second in the 4X800 relay in 8:19.54, just .03 behind Ruston.

The Parkway foursome of Greg Chitman, White, Williams and Demontrayvius Blackwell was third in the 4X100 relay in 42.46. Ouachita Parish won in 42.00 and Ruston was second in 42.08.

The Airline foursome of Justin Washington, Daxton Chavez, Cameron Jefferson and Jeremiah Boudreaux was third in the 4X200 in 1:28.45. Ruston won in 1:28.14 and Ouachita Parish was second in 1:28.16.

Ruston swept the team titles. The boys scored 134.5 points and the girls 117.

Parkway finished third in the boys division with 49 points,

Parkway was fifth in the girls division with 41, Airline sixth with 40 and Benton seventh with 38.

At ULM, Bossier’s Bamburg won the girls 100 hurdles with a time of 17.72, .08 faster than runner-up Amaris Minger of Caldwell Parish.

Applewhite took the boys discus with a throw of 116-8.5. Sterlington’s Nicholas Crumbley finished second with a 115-6.5.

No other Bossier athlete qualified for the state meet in the boys division, but Jalen Thornton came close. He finished fourth in the 100 in 11.07, .09 behind third-place Quinterrious Daggs of Wossman.

Plain Dealing’s Aaron Reddix qualified for the Class 1A state meet with a third-place finish in the boys 200 in the Region I-1A meet at Ouachita Christian.