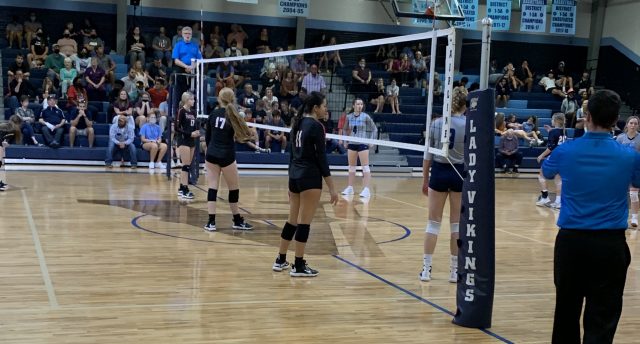 The Airline Lady Vikings defeated the Parkway Lady Panthers in four sets in a District 1-I opener Tuesday night at Airline.

The third was tight all the way. Parkway saved one set point down 24-23. Bu the Lady Vikings won the next two points to take the set 26-24.

Airline (2-0) closed out the match with a 25-15 victory in the fourth set. The match was Parkway’s season opener.

In another District 1-I and season opener, the Benton Lady Tigers fell to defending champion Natchitoches Central in three sets at home.

There was a good, enthusiastic crowd on hand. The one set of bleachers utilized was almost full with family, fans and members of the school’s freshman and JV squads.

Airline senior middle hitter Jacqueline Deville turned in a dominant performance. She had 15 kills along with five aces, five blocks and four digs. Deville was especially effective in the third set victory that turned the momentum of the match in Airline’s favor.

Her soft tip at the net gave the Lady Vikings a 25-24 lead in the third. Rightside hitter Natalie Sutton hit a winner to the back left corner on Airline’s second set point.

Kylie Authement had a strong serving performance with nine aces. She also had 16 assists and five digs.

At Benton, Allie Maranto and Daly Nagot led the Lady Tigers in kills with four and three, respectively.

Maranto also had five aces and one block. Nagot had four aces, two blocks and one assist.

Abbie Schroeder led the team in assists with six. She also had five aces, two kills and one block.

Erin Marin had three aces, one block and one kill. Kaitlyn Masters had four assists. Tatum Waites had an ace.

Benton visits Parkway on Tuesday in a district match.

At Haughton, the Lady Bucs dropped to 0-2. It was Loyola’s season opener.

Haughton travels to West Monroe on Thursday in another non-district match.