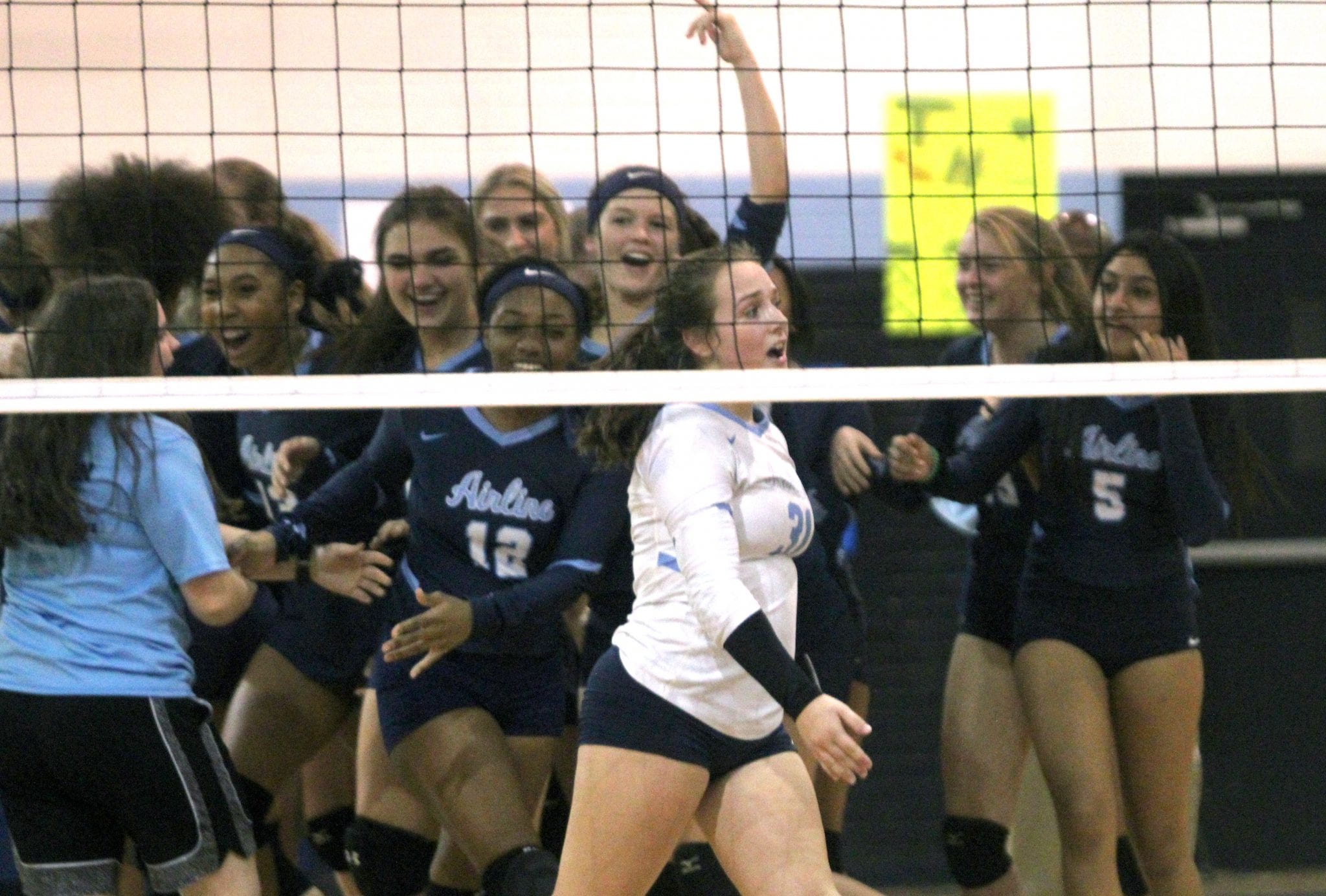 It was also the first playoff game won by a Bossier Parish school. Four schools in the parish now have volleyball programs. Airline’s is in its fifth year.

“We’re really excited,” Airline coach Regina Digilormo said. “First victory, playoff game at home. There were a lot of firsts for us today. I’m just really proud of my team for playing tough. That team was a really good team. They really pushed.

“But what I loved the most was how we adapted to the adversity. They presented different challenges to us. They were tipping the ball. We were able to adapt to that very quickly. I think that’s a testimony to their hard work and what they do in practice. They were prepared and had that will to win so I’m super excited.”

Airline got off to a fast start, jumping out to a 5-1 lead in the first set. The Lady Vikings then outscored the Lady Spartans 11-6 to take a 16-7 lead. Comeaux rallied and got within four a couple of times, including 18-14, but the Lady Vikings reeled off seven of the next nine points to go up 24-16. After the Lady Spartans won back-to-back points, Airline closed out the set.

The second set was tight most of the way. With the score tied at 16, the game was delayed for about 15 minutes over an apparent question regarding Comeaux’s service order.

Once the match resumed, the Lady Spartans outscored the Lady Vikings 9-5 to take the set.

The Lady Spartans jumped out to a quick 4-1 led in the fourth set before the Lady Vikings rallied to tie it. Comeaux then had a good run of points and led 12-7 and 14-10. The Lady Vikings again rallied, tying it at 15. It was still tied at 19 before Airline won six of the next eight points to close the match.

In addition to adjusting to Comeaux’s tipping strategy, Airline kept the pressure on Comeaux at the net. The Lady Vikings also did a good job of keeping the Lady Spartans’ kill attempts in play throughout the match.

Tori Ligman was a big part of that with 31 digs. She also had three aces, one kill and one assist.

Zahria Lloyd, Gabby Patronis and Brooklyn Brandon also played key roles in the victory. Lloyd had 12 kills, 15 digs, nine assists and one ace. Patronis had 29 digs along with eight kills, two assists, two aces and one block. Brandon had 18 digs to go with seven kills and one ace.

Arielle Emanuel had six digs, two aces and one kill. Taylor Williams had three assists, one dig and one ace. Kaylee Swiger had three kills. Taralyn Sweeney had one dig.