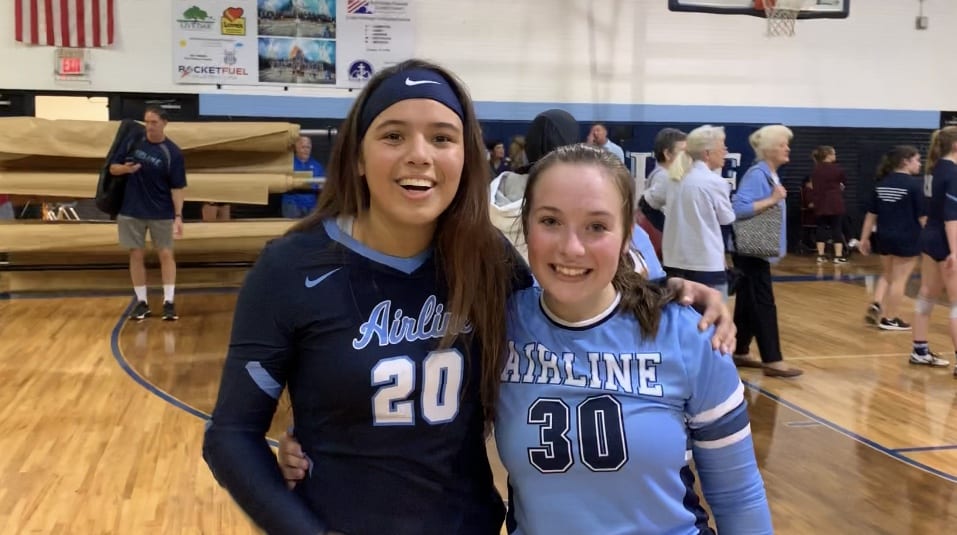 When a No. 16 seed plays a No. 17 seed in the playoffs, you expect a tight, competitive contest.

And that’s just what occurred in the first round of the Division I volleyball playoffs Wednesday evening at Airline.

It took the effort of all the Lady Vikings to come away with the victory.

Elizabeth Gatti had a rare triple-double with 16 assists, 12 digs and 10 kills. Several of her kills came on big points down the stretch.

Gabriel Patronis had a double-double with 18 kills and 24 digs. She also had three aces.

Ariana Wilkinson had a double-double with 26 assists and 11 digs. She also had three aces and two kills.

Jackie Deville, who hit the winning shot to close out the match, had seven kills and three blocks.

Jaci Ervin had 13 digs along with three blocks and three kills. Lexi Danard had four kills and three digs

Chalmette (21-19) did not seem fazed by the five-hour trip or unfamiliar surroundings at the beginning of the match. Taking advantage of some uncharacteristic Airline errors, the Lady Owls rolled to the first-set victory.

The Lady Vikings seemed a little overeager, hitting several potential winners deep. But they settled down in the second set, jumping out to a 5-1 lead.

“We kind of got off to a rocky start,” Deville said. “We didn’t know exactly what to expect. We watched some film but it’s much different when you’re on the court.”

Deville said the Lady Vikings began to adapt to Chalmette’s playing style after recognizing some of their tendencies.

Patronis broke a 22-all tie with a kill and the Lady Vikings won the next two points to even the match at one set apiece.

“What really made the difference with equally matched teams was we wanted it really bad,” Deville said. “Once we got that momentum in that second set we were rolling.”

Chalmette raced to a 6-0 lead in the third. But Airline gradually got back in it, scoring six straight to tie it at 14. The Lady Vikings went ahead 16-15 and eventually led by five. The Lady Owls got no closer than two before Airline grabbed a two sets to one lead.

The Lady Vikings got off to a great start in the fourth, taking leads of 8-1 and 9-2. But the Lady Owls wouldn’t go quietly, getting within two on several occasions. At 15-13, Airline won three straight. The Lady Vikings then stretched the lead to 22-16.

At 24-19, Chalmette saved two match points. But Deville, with an assist from Wilkinson, set off a big celebration with a winner in the middle.

“In that last set I started to feel like we’re going to really take it,” Airline coach Regina Digilormo said. “I knew in my heart we were going to win. But I knew it was going to be a challenge. They’re a good team. They play tough teams all year. They’re smart. They played smart. But we came out on top. That’s pretty awesome.”

Ligman said recovering from the slow start was a matter of remaining confident and playing together.

Patronis said the team fed off the energy from the crowd.

“We light ourselves on fire with all the energy,” she said. “There’s no rush like a volleyball adrenaline rush.”

She also said the team’s success is a result of what the Lady Vikings have built day by day in practice.

“I’m just so proud we put it together like that,” she said.