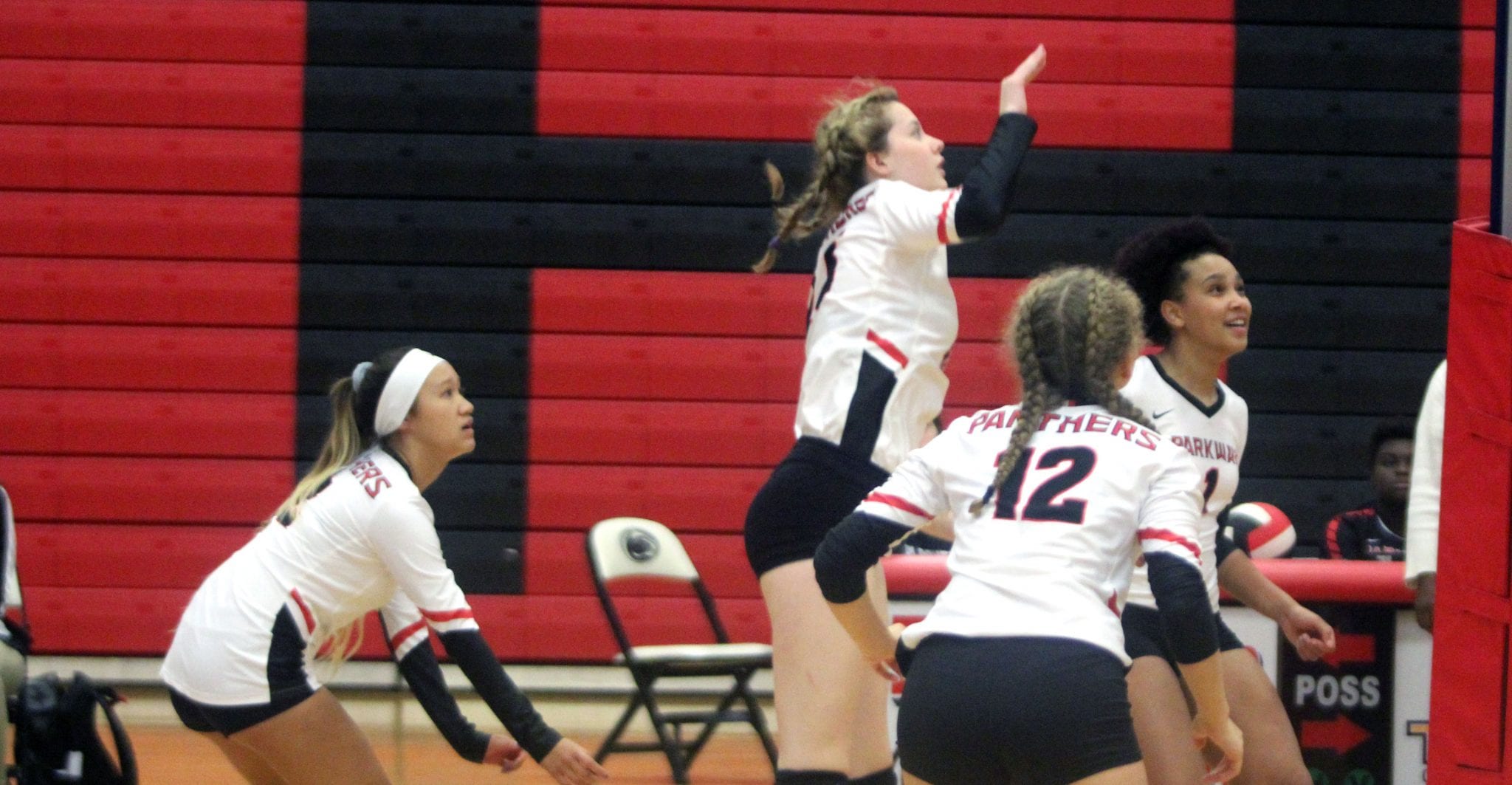 Parkway (4-1) won the first set 25-18 and the second 25-21. The Lady Panthers jumped out to a seven-point lead in the third before Haughton rallied.

Parkway also grabbed an early lead in the fourth set and was on top 14-10 when Haughton rallied again. The Lady Bucs reeled off six straight points to take a 16-14 lead.

After the Lady Panthers got within one, Haughton won four points in a row for a 20-15 lead. The Lady Bucs went on to take the set 25-17.

Haughton continued its strong play early in the decisive fifth, taking a 6-2 lead. But Parkway regained its early form, winning nine straight points for an 11-6 lead.

Haughton twice cut the lead to one, but the Lady Panthers closed out the set and the match 15-11.

“They came out really strong, set a really good tone at first,” Parkway second-year head coach Barbara Curry said of her team. “Then we backed off and were making some errors and the other team obviously adjusted to some of the things we were doing.

“Our front played really good. We were really strong in keeping the ball in court.”

Said Parkway co-captain Alyssa Colvard: “The first two sets we did really good. Then the last couple we struggled. But we kept persevering and we came through and overcame and did really well.”

Communication was one of the reasons for the Lady Panthers’ success, Colvard said.

“We were talking well,” she said. “We were moving around. We were going to our coverage spots and just playing well together.”

Colvard and Madison Collins, who also had a good game, were first-team All-District 1-1 selections last season. Morgan McCarty, the team captain, also played a key role in the victory.

But it was a team effort. According to Parkway’s website, other varsity players are Josalyn Cascio, Emily Crook, Haley Hayden, Sydney Jacobsen, Harley Pierce, Kimmie Stookey and Melanie Willis.

Willis was the Freshman of  the Year in District 1-I last year. Curry said Mackynzie Eason could be a candidate for that honor this season.

“There are six seniors but I have a number of young players, too, that have stepped up and are playing,” Curry said.

“A number of the girls are doing great and are playing really strong, and they adjust really well. I can pull them off the court during a time out and we can tell them and explain what’s going on and what’s happening and they adjust so well, correcting things.”

Curry said the players spending time together on and off the court during the offseason has paid dividents.

Curry gave credit to Haughton for the comeback. It was the third match in a row between the teams that has gone the distance. Last year, they split the two matches.

Arielle Emmanuel, who was a first-team All-District 1-II selection last season, was one of the leaders of the rally. She finished with 12 kills, eight digs and three aces.

Taralyn Sweeney had eight kills, two digs and one block. Mia McWilliams continually set up her teammates and had a very good all-around game with 18 assists, four digs, three kills and two aces.

Catherine Hudson had eight kills to go with three aces and two digs. Jaycie Keith had four kills, four assists and one block.

Adrienne Vickers had four kills, three blocks and one ace. Averi Phillips had seven assists, one ace and one kill. Sierra Lingo had nine digs, three aces and one kill.

Parkway will go for its fourth victory in as many days Thursday at Calvary Baptist. The Lady Panthers won their first District 1-1 game Tuesday in a competitive four-set match against Benton.