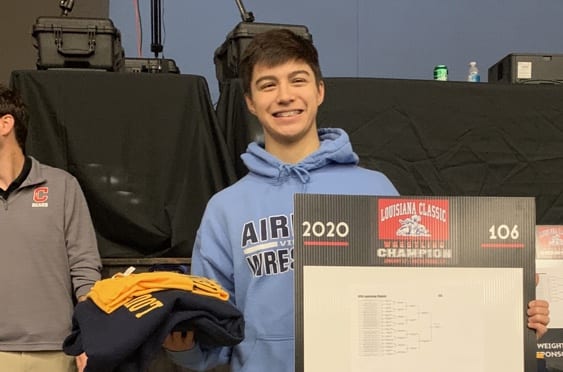 Parkway finished eighth out of 50 teams. The tournament included the top six teams in last year’s Division I tournament and the top three teams in Division II.

Parkway, which has moved up to Division I after winning the last two Division II titles, scored 125 points.

Brother Martin, which has won seven Division I titles in the last eight years, won with 235 points. Holy Cross, last year’s Division I runner-up, was second with 194.

Perry received a first-round bye and then pinned his first two opponents. In the semifinals, it took him just 15 seconds to pin Holy Cross’ Brandon Gainy. Gainy won a narrow 3-1 (SV-1) decision over Parkway’s David Viers in the quarterfinals.

In the championship match, Perry won a 7-2 decision over Brother Martin’s Mason Eisensohn.

According to trackwrestling.com, Perry entered the tournament with a 27-1 record.

Parkway’s Kaleb Garcia was third in the 182-pound class. He received a first-round bye and pinned his first two opponents. In the semifinals, he lost to eventual champion Jarin Meyer of Baton Rouge 6-0.

Keeler pinned his first opponent. After losing in the quarterfinals, he won two matches in the consolation bracket before falling to St. Louis’ Alexander Yokubaitus 9-3 in the semifinals.

Parkway’s Dezrel Eloph was fifth in the 285-pound class. He won the fifth-place match by forfeit over John Curtis Christian’s John Drake.

Eloph pinned his first two opponents. After losing in the quarterfinals, he pinned two more opponents in the consolation bracket before losing to Chalmette’s Jaden Benn 3-0 in the semifinals.

The Allstate Sugar Bowl/LHSAA Wrestling State Tournament is Feb. 14-15 at the CenturyLink Center.