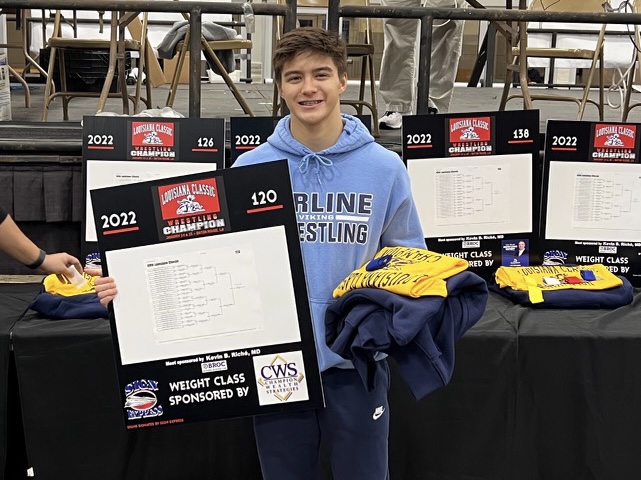 The Louisiana Classic annually attracts the top wrestlers in the state regardless of division.

The title was two-time Division I state champion Perry’s third in the Classic. Airline coach Chase Cox said only two other wrestlers have won four.

Perry defeated Jacob Elsensohn of Brother Martin 6-3 in the finals.

Perry pinned his first three opponents in a combined 2:57. In the quarterfinals, he pinned Chase Haydel of Jesuit in 3:23.  In the semifinals, he pinned Brennan Boyer of Teurlings Catholic in 2:50.

Perry led 4-1 after the first period against Elsensohn thanks to two takedowns. A reversal in the second period gave him a 6-1 lead. Elsensohn scored two points on a reversal with one second left in the match.

Viers pinned his his first two opponents then lost a tough 6-4 SV-1 decision to Luc Johnson of Basile in the quarterfinals. He tied the match at 4 with a reversal with :40 left in the third period. Johnson won with a takedown in overtime.

Viers then won three matches in the consolation bracket to reach the third-place match, pinning Luke Lafleur of Acadiana in 4:36.

He pinned his first two opponents then fell to Joel Lanclos of Teurlings Catholic by fall in 5:47 in the quarterfinals.

Mesloh pinned three opponents in the consolation bracket to reach the third-place match, setting up a rematch with Lanclos who won by fall in 1:16.

Parkway finished tied for 12th with North DeSoto out of 52 teams that posted scored with 94 points. Brother Martin won with 264.5 and Teurlings Catholic was second with 219.