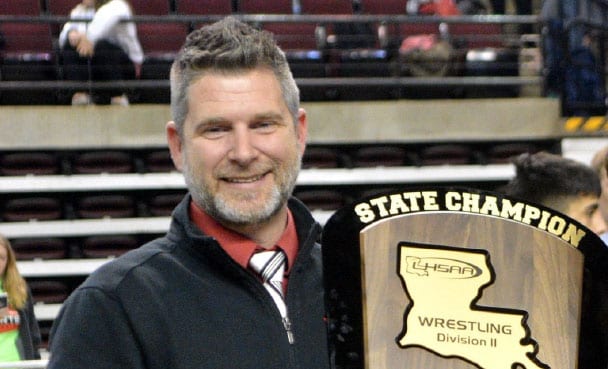 Parkway coach Emmett Beggs has been named the 2017-18 Louisiana Coach of the Year for wrestling.

Nominated by the LHSAA, the award recognizes coaches around the country who act as role models and are making a difference in their communities and sports.

Parkway recently won the Division II state championship for the second year in a row.

Beggs has worked at Parkway since 2010, but began coaching sports in 1999 outside of the district. His accolades are many, including lacrosse championships in Shreveport and Texas; district champions and multiple state awards in football; and wrestling coach to nine state champions, 12 state runners-up, 58 state placers and DII State Champions in 2018 and 2019.

Also the head coach of boys lacrosse at Parkway, Beggs is founder of the LA Rippers Lacrosse Club, a summer travel and development program in northwest Louisiana.