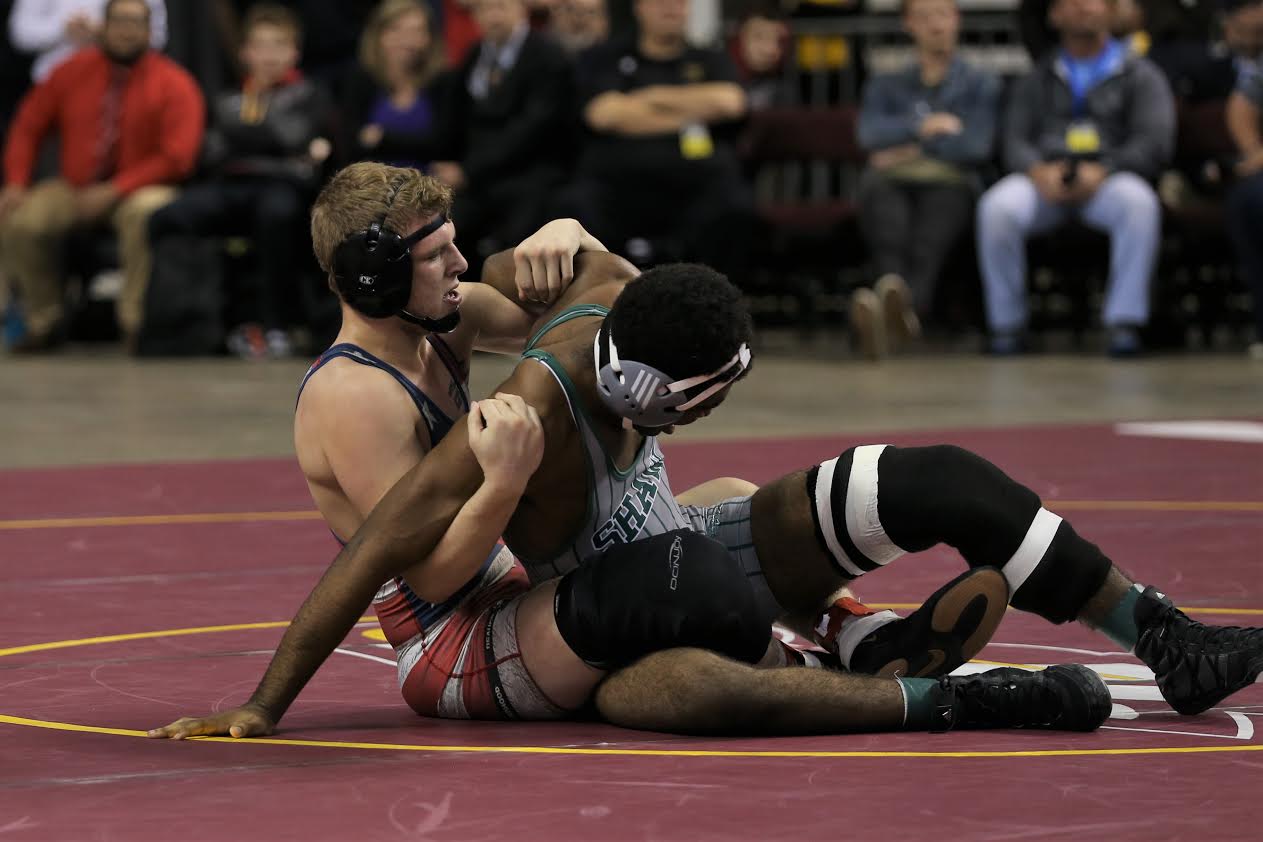 As the final match in the Division II state wrestling tournament was going on, Parkway coach Emmett Beggs paced near one end of the CenturyLink Center.
If Live Oak’s Anthony Ingram defeated Teurlings Catholic’s Miles Santiago in the 285-pound finals, Beggs knew his Panthers would win the state championship outright.
If Santiago won by decision, the Panthers and four-time defending champion Rebels would tie for first.
Ingram took a 5-4 lead in the third period. But Santiago quickly regained the lead and went on to win 8-5.
Parkway and Teurlings Catholic both finished with 244.5 points after two days and dozens of matches. Live Oak was third with 171.5.
The co-championship didn’t put much of a damper on Parkway’s celebration. It was the school’s first state title since 2006 and the fourth overall.
Beggs pointed out that Parkway defeated Teurlings Catholic to win the inaugural Division II Dual State Championship meet during the season and came into the state tournament with a lot of confidence.
“We worked toward this all year,” Beggs said. “We pointed to it last year and came up short.”
Parkway finished third in 2017, 23 points behind Teurlings Catholic.
Beggs credited seniors Trevor Tamburo, Zachary Harper and Dalton Driggers with providing leadership throughout the season.
All three made the finals in their respective weight classes along with sophomores Peyton Miller and Kaleb Garcia.
Driggers was the only one who won an individual state title, defeating Martin Garrett of Archbishop Shaw 7-4 in the 160-pound weight class finals.
“Before the match, my coach told me you have to win this match for your team and for yourself,” Driggers said. “We can win this title if you do it. I said I’m going to win it for myself and you guys. I’m going to win everybody a ring.”
Driggers’ victory was sweet revenge. Last year, he lost to Garrett by a 7-3 decision in the finals.
“It was amazing,” he said. “I wanted him. I stayed in the same weight class. I knew I could beat him.”
Driggers, who was named the Outstanding Wrestler in Division II, said the key to winning the match was takedowns.
Two other Bossier Parish wrestlers won individual titles.
Airline senior Darrell “DJ” Evans defeated Spencer Rayes of Holy Cross by fall in 3:17 in the Division I 182-pound finals.
Evans won despite getting accidentally hit in the nose by Rayes’ knee early in the match. That caused three delays in the first period because of bleeding.
Evans pinned his first two opponents and then won a dramatic 8-7 decision in overtime over Thomas Arseneaux of Jesuit in the semifinals.
Evans helped the Vikings finish seventh in Division I with 143.5 points. Airline was the top public school in the division for the second straight year. Brother Martin won with 319.5 points. Jesuit finished second with 233.
After finishing runner-up the last two years, Haughton senior Daniel “DJ” Monroe won the Division II 220-pound class with a 10-1 victory over Kanyn Barton of Sam Houston in the finals.
Monroe dominated the division, pinning his first three opponents en route to the title match.
Parkway’s Harper and Tamburo came very close to winning championships.
Harper lost to three-time state champion Blake Mateu of Archbishop Rummel 1-0 in the 132-pound finals.
Tamburo’s match in the 138-pound finals against North DeSoto’s Richard Mack III went into overtime tied at 2. But Mack scored two points and a sudden victory just seconds into the OT.
Tamburo won the 132-pound division last year.
Garcia and Miller, whose victories leading up to the finals provided big points, were both pinned by the top seeds in the 182-pound and 195-pound classes, respectively.
Two Airline wrestlers finished runner-up in their respective Division I weight classes — junior Peyton Bass (126 pounds) and senior Matt Salinas (195).
Bass lost to No. 1 seed Daniel Croy of Brother Martin by fall in the finals.
Salinas, the No. 1 seed, closed his outstanding career with a 6-1 loss to Gavin Bonilla of McKinley in the title match.
Salinas dominated his matches leading to the finals, pinning all three opponents.
Parkway got a big boost from third-place finishers Joshua Keeler (106) and Connor Cloinger (220).
Keeler, a sophomore seeded sixth, defeated Naven Dabria of Belle Chasse 4-2 in the third-place match.
Cloinger, a junior, pinned Zavione Willis of Carencro in his third-place match.
Fourth-place finishers from Bossier Parish schools were Airline’s Thomas Barringer (Div. I 132), Airline’s Tucker Almond (Div. I 145), Parkway’s Trey Fontenot (Div. II 132), Haughton’s Nate Williams (Div. II 145) and Haughton’s Garrett Timm (Div. II 182).
Fontenot was forced to withdraw from his third-place match after being injured when he was slammed to the mat in the first period. He was taken to University Health as a precautionary measure and later released.
Fifth-place finishers were Parkway’s Darryl Nicholas Jr. (Div. II 126), Bossier’s Kharman Small (Div. II 138), Parkway’s Jacob Chittom (Div. II 152), Haughton’s Ryker St. John (Div. II 160), Parkway’s Carson Sanders (Div. II 170) and Benton’s Trey Winkler (Div. II 195).
Sixth-place finishers were Airline’s Tyler Eckman (Div. 1 120), Benton’s Hayden Shankle (Div. II 126) and Parkway’s Dezrel Eloph (Div. II 285).