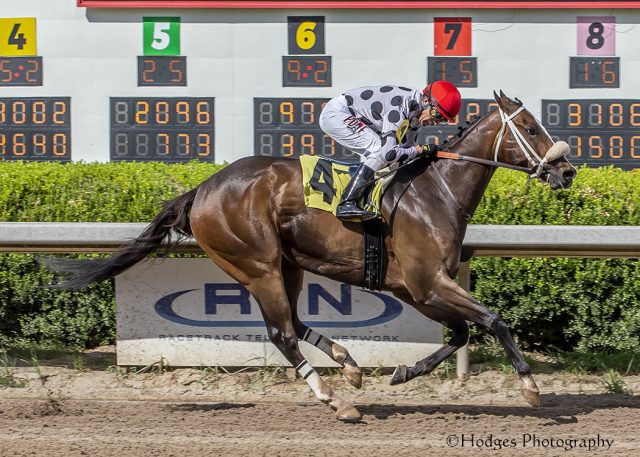 It was another outstanding edition of Louisiana Cup Day on Saturday atLouisiana Downs.

The quality of the Louisiana Thoroughbred breeding industry shone brightly is each of the six stakes on the program.

Despite temperatures in the high 90’s, tremendous performances were noted throughout the afternoon with glory to several experienced runners as well as juveniles.

Here is a recap of the six Louisiana Cup stakes.

Stakes action got underway in the second race with the running of the $67,000 Louisiana Cup Juvenile for Louisiana-bred 2-year-old colts and geldings. A field of eight competed at five and one-half furlongs on the main track.

The winner was Anna Guillot’s Bisping, a son of El Deal, bred by Adcock’s Red River Farm LLC & J. Adcock.  He reunited with jockey Devin Magnon this afternoon, who guided him from this inside post, taking command at the 3/8th pole and drawing clear. He prevailed by a margin of 3 ¾ lengths over Ranch Water in a final time of 1.05.90.

“Before he ever ran, I knew he was special,” said Magnon. “We have a bond and he does everything you ask of him very professionally.”

Trained by Ricky Courville, the dark bay gelding broke his maiden on May 19 at Evangeline Downs prior to running sixth in the $150,000 Tremont Stakes at Belmont Park.

“I had a race in him and took a shot,” said Courville. “We faced big horses in New York.”

Sent off as the second choice in the wagering, Bisping paid $9.60 for the win, which was second in three starts. With today’s winner’s share of $40,200, his earnings stand at $58,050. Courville said that the D.S. “Shine” Young Futurity at Evangeline Downs will likely be his next start.

Cheapskate Diva Thrills Her Connections in the $67,000 Louisiana Cup Distaff

The first turf stakes of the card, the $67,000 Louisiana Cup Distaff, drew nine fillies and mares who traveled a mile and one-sixteenth over the firm Franks Turf Course.

Cheapskate Diva was in fine form as she made her stakes debut for breeder/owner Keith Plaisance.

The 4-year-old filly by Animal Kingdom last ran here on July 3, drawing off in a $25,000 turf allowance by 10 lengths under Carlos Marquez.

Confidently handled Saturday, she was forwardly placed through early fractions of :23.77 and 48.39 before taking the lead at the top of the stretch and drawing clear by 1 ½ lengths. The final time, over the firm turf course was 1.41.92.

This was the first stakes win for the filly and her trainer Joseph “Bobby” Felks.

“I give all the credit to Bobby,” said Marquez. “She used to be more hyper, but Bobby has worked with her and she did it easy for me today.”

“It was his idea to enter her in this,” said Plaisance. “Bobby felt she deserved a shot and to win over tough mares like Net a Bear and Fort Polk was amazing. My hat’s off to Bobby!”

Fort Polk, a 6-year-old daughter of Behindatthebar, trained by Pat Mouton for owners Steve and Pat Roe completed the exacta.

She won her last two turf races at Louisiana Downs, with a total of nine victories in 35 starts. Juan Vargas has the call. Alliaceous closed for third under rider Vicente Del-Cid and longshot Eve’s Delight rounded out the top four.

Defending champion finished seventh and trainer Allen Landry felt the heat might have taken its toll on his multiple-stakes winner.

“She was sweating when we hauled in this morning,” said Landry. “We will give her some time off and see how she does.”

Cheapskate Diva has now won four of her ten efforts with earnings of $101,740. Her connections were undecided on her next start.

Free Like a Girl Sensational in the $67,000 Louisiana Cup Filly and Mare Sprint

The $67,000 Louisiana Filly and Mare Sprint showcased a field of 11 exceptional Louisiana-bred fillies and mares going six furlongs on the fast main track.

Free Like a Girl returned to Louisiana Downs on Cup Day as the 3-1 morning-line favorite in  the six-furlong sprint.

She was honored as 2021 Louisiana Thoroughbred  Breeders Association (LTBA) Champion 2-year-old filly and continues to progress through her 3-year-old campaign.

She was back in state bred company today following starts in the Grade 3, $300,000 Honeybee at Oaklawn Park February 26 against the much heralded Secret Oath and her most recent race, acredible third in the $225,000 Iowa Oaks (G3) on July 9 at Prairie Meadows.

Quite simply, she was exceptional. Jockey Pedro Cotto, Jr. was content to let her break from her far inside post, track the front-running Drop Dead Sexy, and confidently circle the field.

“She likes being on the outside and having something to run at,” explained Pomier. “We were facing older horses and were not sure how it would pan out, but she’s shown time and time again how much she loves her job!”

The connections remain loyal to Cotto, who has piloted Free Like a Girl in each of her Louisiana races.

“He rode for my dad when I was a kid and worked this filly as a baby,” she added. “Pedro fits her and tells us that all he ever wants is to ride our filly!”

City Park, a 5-year-old son of Temple City, bred by Warran Harang, returned to the winner’s circle for the first time in 2022, under very confident handling by rider Joel Dominguez.

Breaking from the rail, he was eighth after the half-mile, before advancing four-wide and drawing clear in 1:41.23 over the firm turf course.

“You can always make it happen when you are on the right horse and I had the right horse today,” said Dominguez. “The race set up well. I knew if they went fast up front, he would come running and that’s what happened.”

City Park was bet down from his 12-1 morning line and rewarded his backers with a $12.80 win payout. Trained by Eduardo Ramirez, the bay gelding has won six of his career efforts, topping the $200,000 mark in earnings Saturday afternoon.

Janet is Ready Lived up to her Name in the $67,000 Louisiana Cup Juvenile Fillies

Nine accredited 2-year-old Louisiana-bred fillies competed in one of the best fields ever for the $67,000 Louisiana Cup Juvenile Fillies Several first-time winners faced off in the five and one-half main track sprint.

Saddling her second winner on the Cup Day card was Chasey Deville Pomier as Janet is Ready notched the win in gate-to-wire fashion under rider Vicente Del-Cid.

This was the third victory for the daughter of Custom for Carlos, who made her debut on May 13 in a $98,000 maiden special weight at Churchill Downs. After running second in Kentucky, she broke her maiden at Evangeline Downs and won the $100,000 Prairie Gold Lassie on July 8 in Iowa, at odds of 21-1.

She drifted out as she approached the wire today, but still prevailed by one-length in 1:05.65, over Guitar Woman, Lady Flurry and Nodah.

Owner Gerry Bruno was on hand for the race and talked about the team behind the filly.

“We bought her at the LTBA Yearling Sale ($5,500) and no one knows that I was Carl Deville’s assistant at Monmouth Park when Chasey was seven, so we’ve been around for a long time,” said Bruno. “She was impressive today, despite drifting at the end!”

Owner Staton Flurry, who won the 201- Super Derby (on turf) with Mr Misunderstood, bred the daughter of Lord Nelson out of the Storm and a Half mare Patchofbadweather. Trained by Karl Broberg, Lady Flurry has been installed as the 7-5 morning-line choice.

Janet Is Ready may be pointed to the DS Shine – Filly Division at Evangeline Downs.

Front-Running Score by Takes Two to Tango in the $67,000 Louisiana Cup Sprint

Takes Two to Tango, a 6-year-old son of Half Ours, added his sixth career victory for breeder/owner Melissa Cantacuzene.  Jockey Luis Quinonez guided the bay gelding to the wire in 1:10.89 over the fast track and spoke about his improvement following his third-place finish in the Louisiana Legends Sprint at Evangeline Downs.

“He broke very well today,” said Quinonez.  “Was very alert and when I called on him, he finished well. I thank the owner for this opportunity.”

Trained by J. Luis Garcia, Takes Two to Tango, has won five of his seven outs at Louisiana Downs.

“He never holds back,” said Cantacuzene. “He always gives 100 percent.”