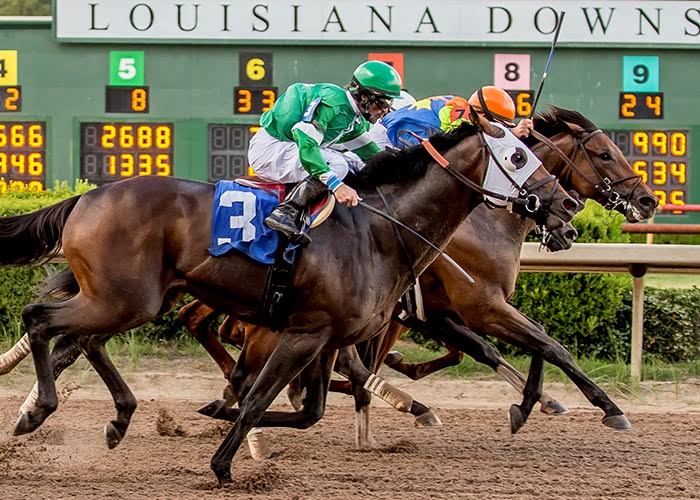 A quality field of 3-year-olds will run in Super Derby 39 at Harrah’s Louisiana Downs on Sunday afternoon. The Super Derby is 11th race on the card with a post time of approximately 5:02.

Leading the field is Lone Sailor who finished eighth in this year’s Run for the Roses for owner Gayle Benson’s GMB Racing.

The New Orleans-based group purchased the colt by Majestic Warrior out of the Mt. Greeley mare Ambitious as a yearling for $120,000. He broke his maiden at Saratoga on Sept. 3, 2017 and advanced directly into stakes company. Trained by Tom Amoss, the bay colt has faced the nation’s top three-year-olds, including Triple Crown winner Justify in both the Kentucky Derby and Preakness Stakes.

Lone Sailor ran second by a nose in the Grade 3, Ohio Derby and most recently finished a respectable third in the Grade 1, Haskell Invitational at Monmouth Park. Lone Sailor has competed in eight graded stakes to date and is the high earner in the Super Derby field with $579,237 banked in twelve starts. Jockey James Graham has the mount and will break from post position three.

“We feel that this is a real opportunity for Lone Sailor to take a step forward,” said Amoss. “He’s been working well in the mornings and the Super Derby is a very important race. Once we began considering sending him to Louisiana Downs, it was an easy sell.”

This would be the first Super Derby win for Amoss, who ran Mo Tom in the 2016 edition of the race.

“I want to catch up with Al (Stall), the “Cajun Bob Baffert,” quipped Amoss. “But, seriously, running in this race is very important to me and my wife. Both our children were born in Shreveport, and we are looking forward to being there on Sunday.”

Trainer Al Stall Jr has a very talented 3-year-old in Autumn Warrior, who earned his berth into the Super Derby as the winner of the $60,000 Super Derby Prelude here on August 4. Bred and owned by Robert Guidry’s Autumn Hill Farms Racing Stable Inc., the son of Orb, is undefeated in three starts, including his first route race for Stall. Overcoming a troubled trip in the Prelude, he advanced from seventh to win in a thrilling photo finish under rider Colby Hernandez. The dark bay colt will break from the rail under Hernandez.

Stall has a longtime association with Guidry, who gave him his first horse in 1991, a filly by Mt. Livermore named Lady Cacharel.

One of the most successful Louisiana conditioners, Stall will be seeking his fourth victory in the Super Derby. He won the prestigious race in 2008 with My Pal Charlie and again two years later with Apart. Departing was the third winner for the New Orleans native in 2013.

Trainer Brad Cox, who won the 2017 Super Derby, which was contested on the Franks Turf Course, with Flurry Racing Stable’s Mr. Misunderstood, has nominated High North, for owners Shortleaf Stables, Inc. Bred in Kentucky, the colt by Midnight Lute won the $250,000 Iowa Derby on July 5, and was third in the Grade 3, $500,000 West Virginia Derby on August 4. Jockey Florent Geroux, who rode High North to victory at Prairie Meadows, will make the trip to Bossier City on Sunday.

Winchell Thoroughbreds LLC and Willis Horton Racing LLC’s Lionite will make the trip to Louisiana Downs for Hall of Fame conditioner Steve Asmussen. This will be the tenth career start for the son of Quality Road, who broke his maiden in April at Oaklawn Park and won his first stakes on June 8 at Prairie Meadows. He finished third in the Iowa Derby and made his most recent start in the Grade 3,West Virginia Derby, where he ran fourth. Asmussen has given the mount to David Cabera, who won his 800th career race Saturday night at Remington Park. Asmussen is also sending in Limation, for owner Michael Langford. Sired by Alternation, he has won two of his seven career starts and exits a start in the Ellis Park Derby on August 12. Diego Saenz will ride for Asmussen.

Other Prelude entrants, G’s Turn owned by Tom Galvin of Dallas, Texas will run for trainer Patricia West as well as Oakwood Stable Inc’s McFeely. The colt by Scat Daddy ran fourth in the Prelude for conditioner John Ney. Owner Danny Keene hopes for a better trip for his colt, Bode’s Maker, the fifth-place runner in the Prelude. The Kentucky-bred son of Bodemeister is trained by Allen Milligan and Louisiana Downs-based rider Joel Dominguez retains the mount.

“If he would have a had a clean trip, the outcome would have been different,” said Keene. “He was boxed in and when he finally got clear, it was too late. He’s a good colt and a strong closer.”

Keene won the 2016 Super Derby with Texas Chrome and has fond memories of the victory.

“Winning the Super Derby meant a great deal,” acknowledged Keene. “He was third in the wagering that day and stepped up big time. There are some good horses in this year’s field, but in racing, you never know!”

The field also includes Charlie’s Schiller, a son of Artie Schiller who will make his stakes debut for owners Daren Ives and James Adametz. He is trained by Tommy Ives who will give a leg up to Aubrie Green.

“The Super Derby will always be the most significant race run at Louisiana Downs,” said David Heitzmann, Louisiana Downs Director of Racing. “Its return to the main track and Grade 3 status attracted an impressive field for Super Derby 39. With excellent fields in each of our seven stakes, we look forward to presenting an outstanding card for our local fans and horseplayers across the country on Sunday.”