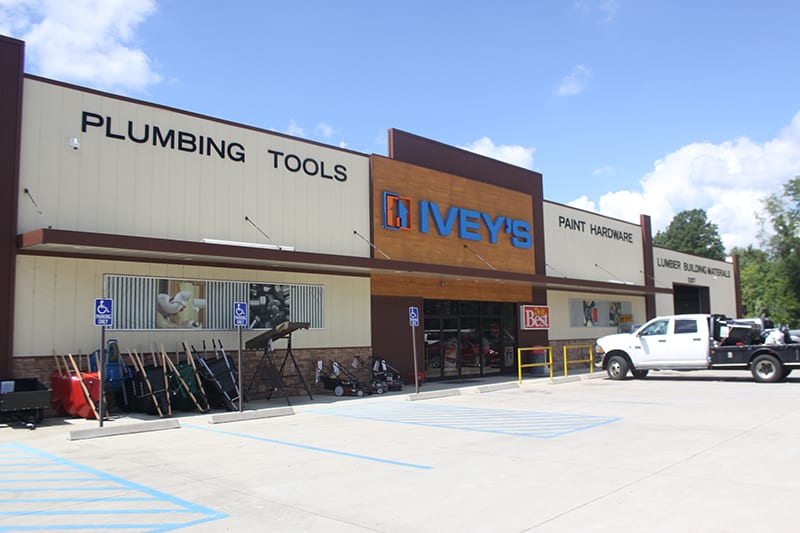 Every business has a story to tell. At, Ivey’s Building Materials Center in Haughton, Louisiana, the story has very deep family roots and goes all the way back to the year 1969. That is when company founders Roy and Mack Ivey started the business in Logansport, Louisiana. The company later expanded to a store in Mansfield, Louisiana. Then, a location opened on Airline Drive in Bossier City in 1986, but the Bossier City expansion was short-lived due to unforeseen circumstances. Ivey’s Building Materials Center opened a brand new location in Haughton, Louisiana in early 2014. However, with the brief opening of a Bossier City location almost 30 years earlier, the Haughton store location is not their first venture into doing business in Bossier Parish.

Getting back to the company’s roots, Mack Ivey was eventually joined in the business by his son-in-law (Mitch Johnson) and now, Mitch’s son (Josh Johnson – Mack’s grandson) has taken the reins as the Store Manager of the company’s Haughton location. Both father and son have been working in the business since they were 13-14 years old.

Ivey’s Building Materials Center stores in Haughton and Mansfield are award winning operations – as they were recently recognized and won an award for being the Best In The State (Hardware All-Stars) from Do-it-Best Corporation. Do-it-Best Corp., formerly known as Hardware Wholesalers, Inc., is a member-owned hardware, lumber, and building materials cooperative based in Fort Wayne, Indiana.

Recently, BPT had a chance to sit down for a one-on-one interview with Ivey’s Haughton Store Manager Josh Johnson. In the interview, Mr. Johnson described his grandfather’s dream of opening a store in Bossier City. As mentioned above, this dream was realized in 1986 with the opening of an Ivey’s store on Airline Drive. However, Mack Ivey became ill and was diagnosed with cancer shortly thereafter. As a result, Mack did not live to see the long term existence of his Bossier location goal.

After Mack Ivey’s death, the family elected to close the relatively new Bossier location and continued to operate as they were before the Bossier City store opened. As Josh Johnson says, “that is the best and most interesting part of our story as it relates to us being in Haughton with a store location today. We are fulfilling my grandfather’s goal and vision by being in Bossier Parish. Ultimately, fulfilling this dream of my grandfather’s makes me feel really good.”

Josh Johnson further states, “it is hard to compete with the “big box” store chains in today’s competitive business world. As a small business, you can not side step this fact. However, being well capitalized and offering superior service can really make the difference.” Johnson continued, “in fact that is one of the small business person’s only legs to stand on in today’s competitive business environment. You have to be local, you have to be convenient and you have to offer fantastic service at a reasonable/competitive price point. In this way, we can compete. It is not easy, but you can compete, you really can.”

Johnson passionately says that they find a lot of strength and relief in working with their co-op groups such as Do-It-Best on the hardware side and ABS (Allied Building Stores, Inc. of Monroe, LA (wholesaler of lumber and building materials)) on the commodities (non hardware) side. These cooperative partnerships allow Ivey’s Building Materials Center to offer a huge product selection at very competitive price points.

Ivey’s trains its associates to be experts in particular areas such as electrical, plumbing, etc. So, customers can get expert advice and assistance in whatever areas they need in terms of the hardware and building material supplies stocked at the store.

Josh Johnson also offered some very valuable advice to business owners: “have a great banker and hire great team members.” Johnson also wanted to share some of the
lessons he has learned at this point in his career as a businessman. He says that over the years, he has really learned to appreciate the value of leadership. He cites leadership and learning from other leaders as being a very important part of his growth and development as a businessman. He advises, “Be strong. Have a vision and execute the vision. Learn from other successful leaders and companies that do what you do.”

Johnson also mentioned that their management team has visited stores in the area/region that do what they do – stores that are in their exact retail market segment.
As he says, “seeing how others in your field operate can push your own vision for your business forward.” He also advises business owners to join or take advantage of any cooperative “roundtable” groups or advice panels that come their way as they pertain to businesses in their particular industry. He emphatically added, “Don’t let your pride get in the way or stop you from asking the proper questions and asking other successful people how they became successful. Successful people often want to help others be successful.”

Ivey’s Building Materials Center relies upon many years of experience in driving the success of it’s two stores in Haughton and Mansfield. The Haughton store has 21 employees and overall, the company has 45 employees (including the Mansfield location). Ivey’s Haughton store uses several retirees to comprise an integral part of its team member associate staff (many of them retired from the Bossier Parish School system).

Ivey’s Building Materials Center is a locally owned/locally operated business. Their award winning Haughton location is well stocked with most all of your hardware and building material needs. Go by and see them today. It is definitely worth the trip and you’ll be glad that you did. As we found out on our recent visit, it is great to experience good “old-fashioned” personal and courteous service the way it used to be….the Ivey’s Building Materials Center way! 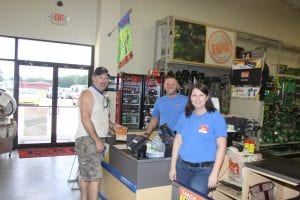