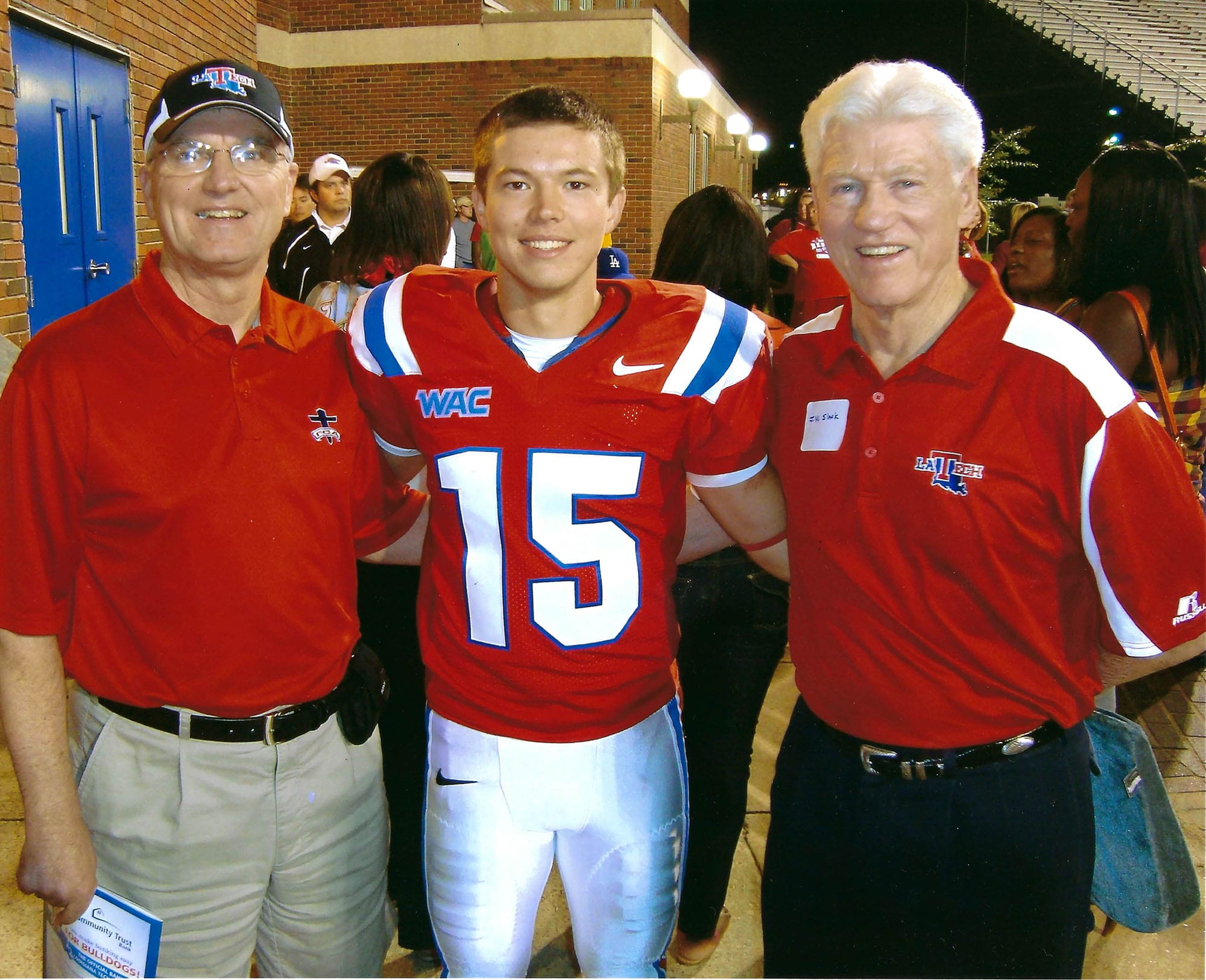 This is one of a series of features on Louisiana Tech’s 2019 Hall of Fame Class. The induction ceremony will be held Friday, Oct. 18 on the floor of the Thomas Assembly Center. Tickets are $40 per ticket or $320 for a table of eight. To order tickets, go to: www.latechalumni.org/hof19 or call Solomon Randle at 318-255-7950.

RUSTON — Sixty years after he played his last football game for Louisiana Tech, J.W. Slack is going to be inducted into the Tech Athletics Hall of Fame.

In the 1950s, he was a do-everything back and athlete for Bossier High and then arguably one of the more underrated players in Bulldogs’ football history.

A three-year starter, all-conference as a senior on one of Tech’s best-ever teams, a solid running back, safety, punter, placekicker, kick returner, and team leader, the honor is for much more than just football.

James Watkins Slack — always just J.W. to everyone — followed with a notable career in law enforcement, numerous contributions to life in Bossier City and Parish, and with Tech, where he has remained a fan and supporter, and created a legacy.

The Slacks are the first three-generation football family in Tech history.

But the Tech Athletics Hall of Fame was a missing honor.

J.W. thought it was possible in September 2001 when he was chosen as one of Tech’s top 50 football players on its All-Century (100-year) team. But the call did not come until early in 2019.

“They caught me so unprepared,” he said of his response when told of his impending induction. “I thought it was never going to happen. Good gosh, I don’t even remember what I said.”

“One great individual and one heckuva great athlete,” said Dr. Billy Bundrick, the Tech legend as longtime team physician, orthopedic surgeon and university supporter who when he played end in 1959 was a team co-captain with Slack. “No one could ever say anything bad about J.W.”

If there is one regret, it is that Mary Virginia Williamson Slack — “Ginger” — is not here for this occasion. She was his No. 1 fan; they met as sophomores at Bossier High, married in August 1954 before J.W.’s senior season and were married for 56 years. The three sons gave them six grandchildren.

Her death, at 74, in November 2010 came after nine years of treatment for multiple myeloma (bone cancer) through which J.W. made her a promise — “I will make every step you make” — and lived up to it through eight years of treatments. The only exception was when he missed a trip because of heart bypass surgery.

“We got closer than we’d ever been,” he says in reflection.

“She was the matriarch of our family,” J.W. said, “a silent person who never jumped on me or criticized me. She was a good mother, a good wife. I could have looked the world over and not done better.”

A pause, and a chokeful thought: “I miss her so much.”

The youngest of eight children in his family, he grew up on Waller Street in Bossier, and after his early football roots, developed into the star player at Bossier High in 1953 and ’54, an All-City choice (unanimously as a senior).

He was the Bearkats’ team captain his last two years, with several three-touchdown games, As a senior he was a second-team All-State selection in Class A, easilyh his district leading scorer with 106 — 16 touchdowns, 10 PATs. He ran for 1,130 yards.

In his final home game against powerful Springhill, he scored all 19 Bossier points (in a 32-19 loss).

In the spring, he was a sprinter in track and field, and a speedy centerfielder in baseball.

And yet, his college days had a rocky start and they almost began, of all places, at arch-rival Northwestern State, where he reported for two-a-day practices. But he did not stay long.

He returned to Bossier and soon called coach Joe Aillet at Tech, who added him to the squad deep into fall practice.

In Coach Aillet, as so many at Tech did, he found “the person who had more impact on my life than anyone except my parents. … He was my mentor, my coach — a brilliant coach — and, more importantly, he was my friend.”

He played some as a sub for the outstanding 1955 Bulldogs, but not enough to letter and left school. After working in the oilfields, he asked Aillet for another chance and earned 24 credit hours in the spring and summer semesters to be eligible to play in the fall.

He became a Tech regular at running back and safety for three Gulf States Conference-title seasons — records of 6-4, 7-3 and 9-1, including a combined 13-2 GSC record.

As a sophomore in 1957 — when he played both ways, rushed for 350 yards, punted, placekicked, and returned kicks — he earned Tech’s Billy Moss Memorial Trophy for contributions to the team.

The ’59 team, one of three Aillet-coached Tech teams that had 9-1 records (also 1955 and 1964), was one of the best defensive team in school history, if not the best — six shutouts and only 48 total points by opponents. The only spoiler was a 13-6 opening loss at Lamar.

“Two or three games I did really well,” J.W. said, and in typical modest fashion, quickly added, “If I am bragging on myself, I’m sorry.”

The capper was the season’s biggest test, a 10-8 slugfest with Memphis State — ranked No. 7 nationally among small-college teams — on a cold, sleeting, and J.W. noted, “miserable” mid-November day in Ruston.

Calling him “a solid candidate for Little All-America honors” as he mentions Slack scoring the game’s first TD and kicking the PAT in the first quarter, Dawson went on to write: “Slack was magnificent in every phase of the game. His booming punts kept Memphis in deep holes much of the time, his defensive play was sharp and his ball-carrying was sensational. Slack led the rushers with 84 yards on 23 pile-driving carries.”

Indeed, after the season, J.W. earned one All-America honor.

The other starting halfback, Paul Hynes, was more explosive and talented enough to play in the AFL for a couple of years. But Slack was the team’s leading rusher in 1959 with 588 yards.

The college three-platoon system of the day in which substitutions were limited and “we might play only 2 1/2 quarters in a game,” Slack saiid, meant that “the stats were weathered down, even for guys like [Heisman Trophy winners] John David Crow (Texas A&M) and Billy Cannon (LSU).”

Slack did finish as the school’s No. 5 all-time rusher at the time.

Pat Garrett was a fellow Tech running back for a couple of years, the fastest man on the Tech campus — a champion sprinter in track and field — and later a respected English professor.

“J.W. was a very consistent runner, an up-the-field runner, not sideways like me,” Dr. Garrett said. “He was dependable, so level and consistent. You could depend on him, and he was the kind of back Coach Aillet liked to have.

“He was quite a guy, admired and well-liked by all of us.”

Billy Bundrick, like Slack, arrived at Tech in the fall of 1955, a year after they made the Shreveport-Bossier All-City team, Bundrick as an end at Byrd High.  Dr. Bundrick recalled that “our offense [Tech 1959] wasn’t wide-open, but J.W. could do whatever was needed for the team. … We were co-captains, but really he was the head honcho.”

Mickey Slaughter quickly became a J.W. Slack fan as a freshman on the 1959 team.

“He was a wonderful running back and an outstanding safety,” said Slaughter, destined to become a Tech quarterback star who went on to pro football and then was the offensive mastermind of the Maxie Lambright era coaching staff. “He was a really good tackler and good cover man …

“He was very strong physically, not very big, but tough. [On offense] he could cut on a dime, and he was always going forward. … He had the unique ability of shredding tacklers. Guys would hit him and maybe stop him for a moment, but he would break away and get more yards.

“The best thing about him was his leadership,” Slaughter added. “He was a born leader, in practice and in games. All the guys looked up to him, especially the young ones, and I was one of those.”

After Tech graduation in 1960, with a B.A. in education, there were two brief training-camp tries to play in the new American Football League with the Chargers (Los Angeles ’60, San Diego ’61).

“I didn’t do a good job of trying to make the team,” recalled J.W. “I was homesick [for his family] the first year” and a job opportunity with the Bossier Parish Sheriff’s Department — he had gotten to know Sheriff Willie Waggoner a few years before — enticed him in ’61.

Going into coaching had been a consideration, but the money in law enforcement was more appealing. He did turn down coaching offers a couple of years later.

In two stints with the Sheriff’s Department for much of two decades, he had a variety of jobs, but most notably worked as a juvenile officer dealing with middle and high school students who had discipline problems.

Through the years, he continued on the fringes on law enforcement in special roles in Bossier.

J.W. also was a serial candidate for political offices in the city and parish. He ran for clerk of court in 1967, for tax assessor in 1971 (lost in a runoff), and for sheriff — the job he most desired, to succeed   Waggoner after his death — in 1976, finishing third in a 10-man race.

He found a longtime place in the Bossier Parish School Board as the District 7 representative, selected to fill a spot vacated by a death in July 1998. He has served in that role for more than 20 years, running unopposed. He was school board president in 2004 and a bond issue was passed in that year.

He says now that “we have been able to accomplish a lot” in his time on the board, building new schools and boosting facilities. “… I don’t take credit for that, but I guess we were doing something right.”

He also became a Masonic Lodge member, and he and Ginger were always involved in their Baptist church activities. Their religious convictions carried through to the family.

Unsurprisingly, Terry and Hayden both call him “my biggest hero.”

But other than the usual father/son/grandson play around the house, the former star player did not coach them.

“He never interfered,” said Terry. “He must have made a decision to back off and let my coaches do the coaching in junior and high school. … He did not really get technical with me in talking football.

” … People thought I would be a running back because he was,” Terry added. “I played there a little, but mostly I was on defense.”

Hayden played at Calvary Baptist under head coach Doug Pederson, who went on to be the Super Bowl-winning coach of the Philadelphia Eagles. J.W. did offer Hayden advice on punting, but very little.

“Wish I had had some of his speed,” said Hayden. “Obviously I did not know him as a player, but I know him as a man. He’s a Godly man, with high character, and I know the great example he set for our family.”

Of his Tech days, J.W. was especially proud to have been teammates — as others were — with the three Hinton brothers (Pat one year, Tommy for two and Joe for three). And, “I enjoyed my time there and made so many great friends.”

Now, those friends who remain with us and all Tech fans will know J.W. Slack as a Hall of Famer.