Jean Ann Tillman devoted her life to husband, Raymond R. Tillman, who passed away on January 3, 2014. In keeping with their beautiful love story, God answered her prayers to be reunited with him when she went peacefully to her eternal home on January 7, 2014.

Jean was born in Saipan on November 21, 1930. As a teenager during WWII, she lost several family members. She learned to speak English and worked as an interpreter in the US Air Force Base hospital in Tokyo. While working at the Base Exchange, she met Ray. They fell in love, married, and returned to the states to start a family. They were blessed with five daughters, and moved throughout the U.S. and Germany as Ray was stationed at different bases. 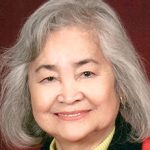 In 1975, Jean and Ray suffered the tragic loss of their daughter, June Tillman. Years later, Raymond was diagnosed with Alzheimer’s. In the early stages of the disease, Jean cared for him at home. As the disease progressed, she continued to faithfully care for him, often going to the nursing home twice a day.

Her life journey is complete; she is reunited with Ray and they will remain together for eternity.