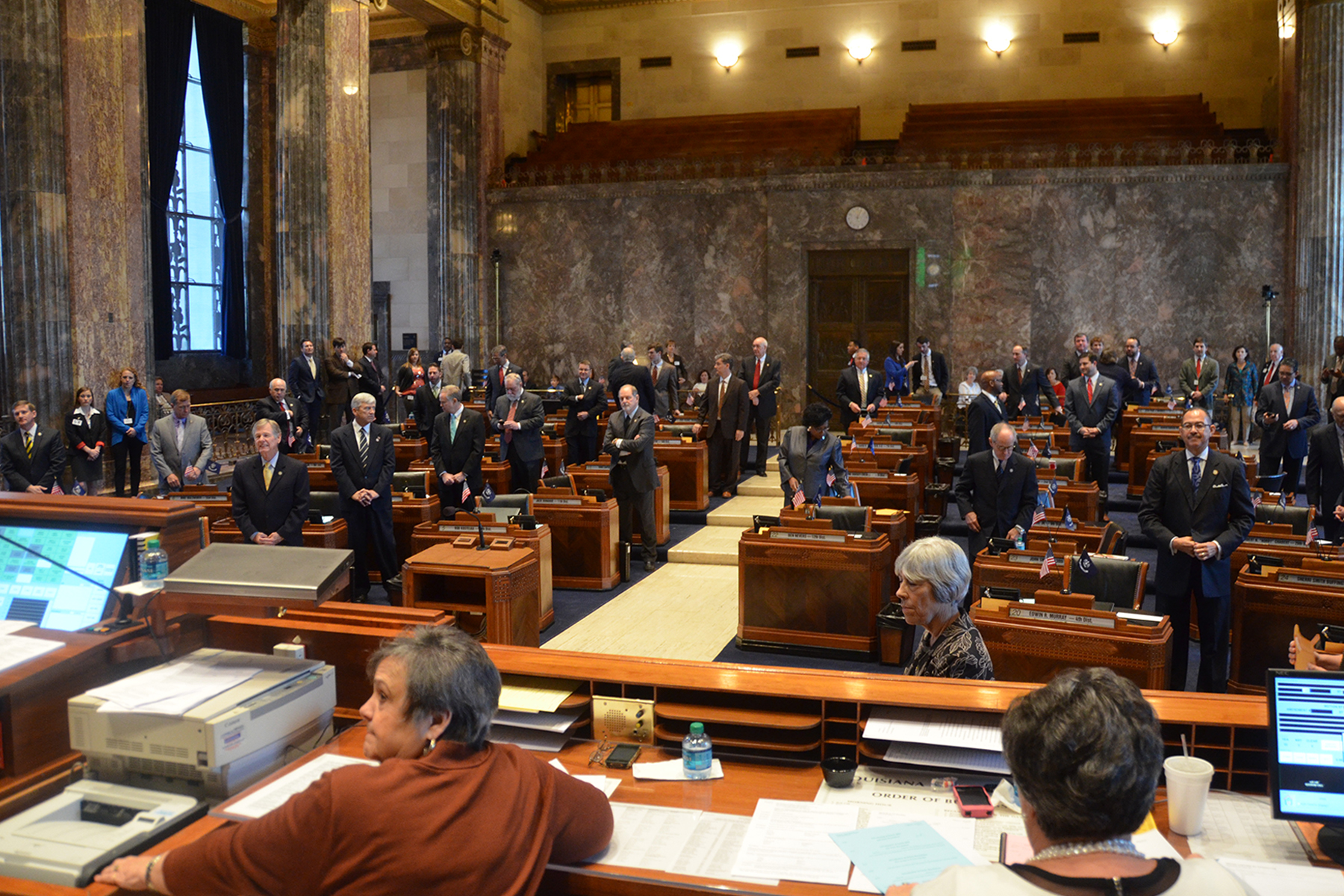 Below is an excerpt of Gov. Bobby Jindal’s remarks at the opening of the 2014 Regular Legislative Session

Mr. President, Mr. Speaker, Members of the House, Members of the Senate, fellow residents of this great state – thank you for the opportunity to come address you on this very important day.

When I took office six years ago, we faced immense challenges.

Each of you and the people of Louisiana accepted this challenge and we took it head on.

With your help and with the persistence and passion of the people of Louisiana, I’m proud of the work we have done.

We overhauled our ethics laws, and Louisiana now has some of the toughest ethics laws in the nation.

We moved from the bottom ten to the top ten on the Better Government Association’s Integrity Index rankings, and from 44th in the nation to 1st place on the Center for Public Integrity’s legislative financial disclosure rankings.

We implemented one of the nation’s largest school choice systems so children are no longer trapped in failing schools.

We passed reforms so teachers are finally being rewarded for their hard work in educating our children.

The number of failing schools in our state has been cut in half and Louisiana’s high school graduation rate has reached an all-time high.

We shifted from an antiquated model of a government-run public hospital system to a system that embraces the ingenuity and efficiency of experienced private partners.

The new model of public-private partnerships sustains access to safety net care while supporting and improving graduate medical education in Louisiana, and lowering costs for taxpayers.

These partnerships are transforming access to services that our people need, lowering costs and providing better educational experiences for future health care professionals that our entire state will benefit from for years to come.

I could go on and on talking about the great accomplishments that you have worked towards over the past six years, but here’s the point…

After all of this…overhauling our ethics code, revamping the workforce training system, cutting taxes, improving our education system, transforming our healthcare delivery healthcare system…what has that meant for the state and the people of Louisiana?

We have announced economic development wins that are resulting in more than 80,000 new jobs and more than $50 billion in private capital investment.

Louisiana now ranks higher in every national business-climate ranking than it ever did prior to January 2008.

Here is what this all means – Louisiana now has more jobs, more people, and higher incomes than any point in the state’s history.

Louisiana now has more jobs, more people, and higher incomes than any point in the state’s history.

I could give you more numbers and statistics, and you all know that I like to do that, but instead, I want to tell you the stories of Louisianians and NEW Louisianians who are now able to pursue their dreams because of the work you have done over the past six years.

A native of Winnfield, Matt Purser left Louisiana in 1998 to pursue a job opportunity in Dallas, Texas.

Over time, Matt wanted to return to his home state to be part of a community like the one where he grew up – but only if a job opportunity were available.

That’s when he heard about Crest Industries.

A leader in the electrical transmission and distribution sector, Crest Industries has experienced solid growth from its headquarters in Pineville.

Not only is he back with friends and family here in our great state, but he is also enjoying his career with a Louisiana-based company poised for more growth.

As Crest Industries’ Mobile Executive, Matt hit the ground running, contributing to both of Crest Industries’ latest investments: a 70-job galvanizing plant in Tangipahoa Parish, and a new expansion at Crest’s Pineville headquarters, which will result in 90 new direct jobs.

A few weeks ago, we announced that CSC will establish a new technology center at Bossier City’s National Cyber Research Park.

The company will employ 800 people in cloud computing, cyber security, big data and application modernization—and one of them will be Randal.

As hiring manager, Randal is accepting applications from highly skilled, talented people who may soon be his colleagues.

So after being a LIFELONG resident of Texas, Randal and his family have moved to Bossier City to start a new chapter as Louisiana residents.

Randal – welcome to Louisiana, and we wish you the best on your continued success with CSC!

I wish I could do this all day.

The stories of these people represent the stories of thousands of Louisianians who are now able to pursue their dreams in this place we all love to call home.

Over the past six years, we have made great progress and more people are now able to find a job and raise a family here, but our work is not done yet.

Because of the work we have completed to foster a strong business climate, there are now thousands of jobs in the pipeline for Louisiana.

We have tens of thousands of jobs in the pipeline that must be filled, and our next challenge is to ensure we have the skilled workforce to fill these jobs of the future.

Economists have recently said they have never seen an industrial expansion like the one under way in Louisiana, but have also warned that we must do a better job training skilled workers that will be needed to fill the demand for jobs at the major industrial and high tech projects coming to Louisiana.

That’s why our top priority this legislative session must be making sure we have the resources to prepare our students and train them for the jobs of the future.

In order to help meet this goal, our budget for next year will increase total higher education funding by over $141 million.

This funding includes a new higher education workforce incentive initiative of $40 million that will better prepare Louisiana students to compete in the new global economy.

The fund will help ensure that we can align the work of our colleges and universities with the needs of businesses creating jobs in Louisiana.

We also will be supporting efforts by a number of legislators and business leaders who have expressed concerns about recent litigation, its impact on economic development and the need to create a more business friendly environment in the legal system.

We’ve done a lot of things to make Louisiana a great place to do business. We’ve cut taxes, cut government spending, reformed our ethics code, and improved our education system.

But, we also need to make sure we have a predictable, fair, legal environment in Louisiana.

We’re committed to working with legislators and business groups to make sure we reform Louisiana’s legal environment so we can bring even more jobs to our state.

In addition we will be working with legislators to support our veterans and further promote a culture of life.

Finally, we are also working with legislators to continue to crack down on the horrific crime of human trafficking.

Each year, hundreds of thousands of women and children around the world become victims of a global sex trade.

Victims are forced to sell these services by means of physical abuse, threats, lies, manipulation, and false promises for things like education or a place to stay.

This isn’t a crime that is just happening in some faraway place.

As we’ve seen from investigations by Louisiana State Police recently, it’s happening here in Baton Rouge and across our state.

That’s why we’ll propose a legislative package to prosecute criminals to the fullest extent of the law, and protect the vulnerable and often forgotten victims of these terrible crimes.

We’ve made great progress over the past six years, but it’s not time to declare victory yet.

We cannot rest on our laurels.

We must continue to make sure that our sons and daughters have the opportunity to pursue and catch the American Dream right here in Louisiana.

They came so that my mom could study at LSU and when they arrived my dad went through the yellow pages and started calling company after company until somebody would hire him.

He wasn’t looking for a handout. He simply wanted a job so that he could raise his family.

My dad is one of nine children to grow up in a house without electricity or running water.

He was the first and only one in his family to get past the fifth grade.

Every day growing up my dad would say to me and my brother – sons, I may not be giving you an inheritance or a famous last name, but I’m going to make sure that if you work hard and get a great education you can do anything you want in this great country.

To me – that’s the American dream.

The dream that each of us has the opportunity to excel if we are willing to work hard to achieve our goals.

I want that for every child born in our state.

That’s what we must continue to work towards every single day.