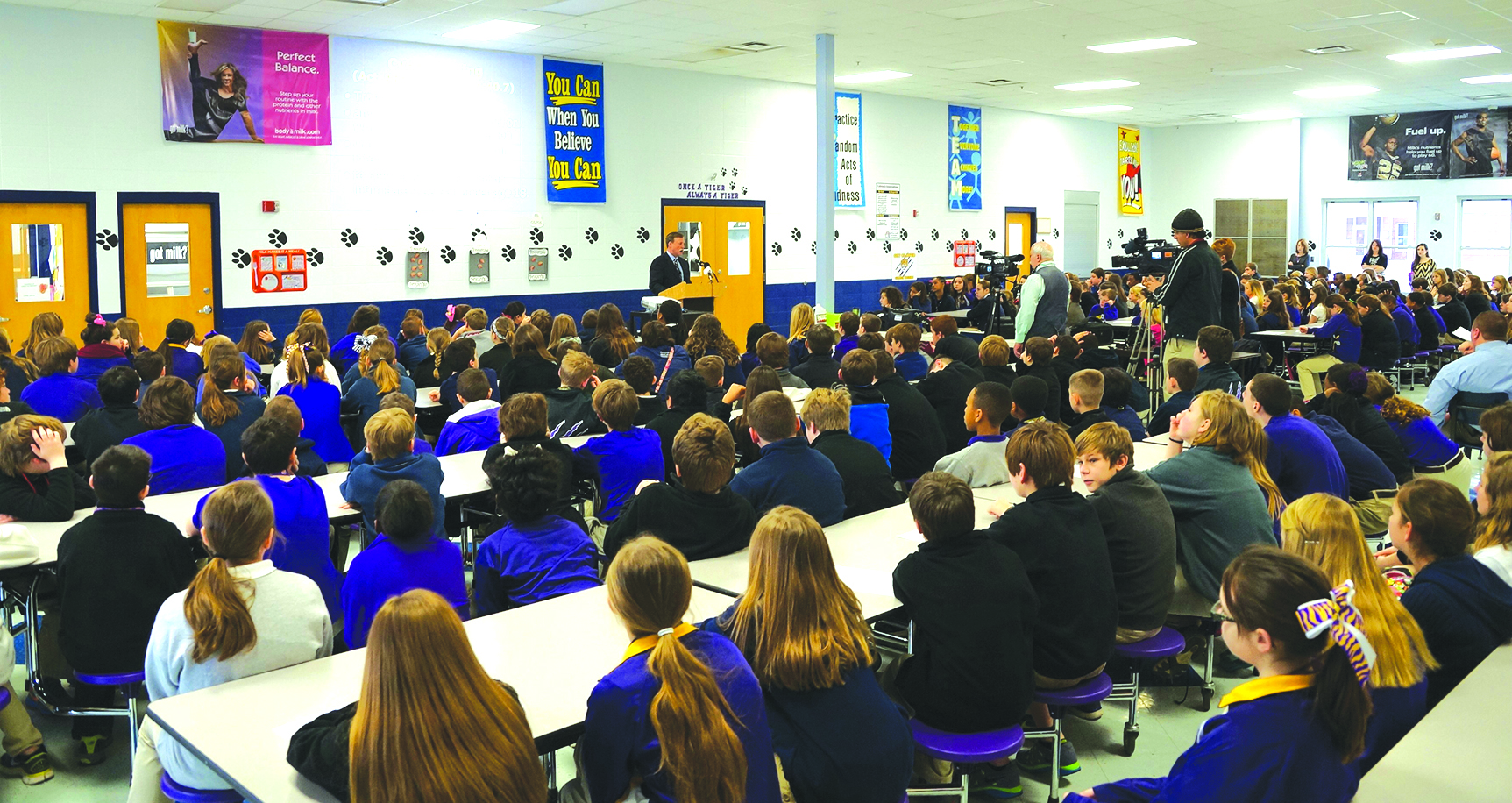 Mesmerized, spellbound, rapt awe — all describe the 297 well-mannered sixth-graders from Benton Middle School who watched a nearly hour-long program on the perils and criminal consequences of sexting last week.

Maybe “undivided attention” best suits this highly-attentive audience of 12- and 13 year-olds who witnessed a first in their school: Caddo District Court Judge Scott Crichton’s presentation of his most-successful public service program “Sexting, Texting, and Beyond.”

Under the watchful eyes of principal Kyle Machen, Judge Crichton’s power-point presentation received high marks from members of the Bossier Sheriff’s Department, other teachers, and parents.

Smartly dressed in their khaki and blue uniforms, the middle school students listened and watched intently, as Crichton described the hazards and punishments of the latest fad on social media: taking nude, or semi-nude photos of yourself or others on a cell phone, then sending them via the internet to harass, embarrass, or intimidate the unwitting subject, in front of their peers or strangers.

Based on the severity of the actions, Judge Crichton described criminal consequences ranging from a misdemeanor with fine, to a felony, which could also carry jail time, and a life-long brand as a “Registered Sex Offender.”

After one such video illustration, the Judge asked the students about a young girl’s actions participating in sexting: “Is this right?”

At that point, it seems the entire audience erupted with a resounding “No!” To which Crichton responded, “Your Honor, I think the jury has spoken.”

During that series of videos which emphasized his messages, Judge Crichton also warned that parents who were knowledgeable of such actions, could also be held accountable as well, even to the extent of a felon in possession of child-pornography.

He also discussed the harsh specter of death, which came as a shock to the students. He related the recent death of a south Bossier teen who committed suicide as a result of cyber-bullying. Also, Crichton detailed another local tragic case where a sex offender, by a series of text messages, lured and murdered a 12-year-old boy.

In all, the program marked just one of such a series of educational assemblies soon to be conducted by the Bossier Parish School System, designed to help educate those children targeted by their peers, wanting to participate in this most-illegal fad by the use of Instagram, Facebook, and other forms of social media.

Videotaped by the Bossier School System, Judge Crichton’s program will also be utilized in future assemblies: all part of the parish’s promise to help educate and deter middle school and high school students from the criminal, and possible civil, consequences of sexting and texting.

By invitation from Bossier School Superintendent D.C. Machen, with the support of Bossier Sheriff Julian Whittington, Crichton said he was honored to share his information in this school setting.