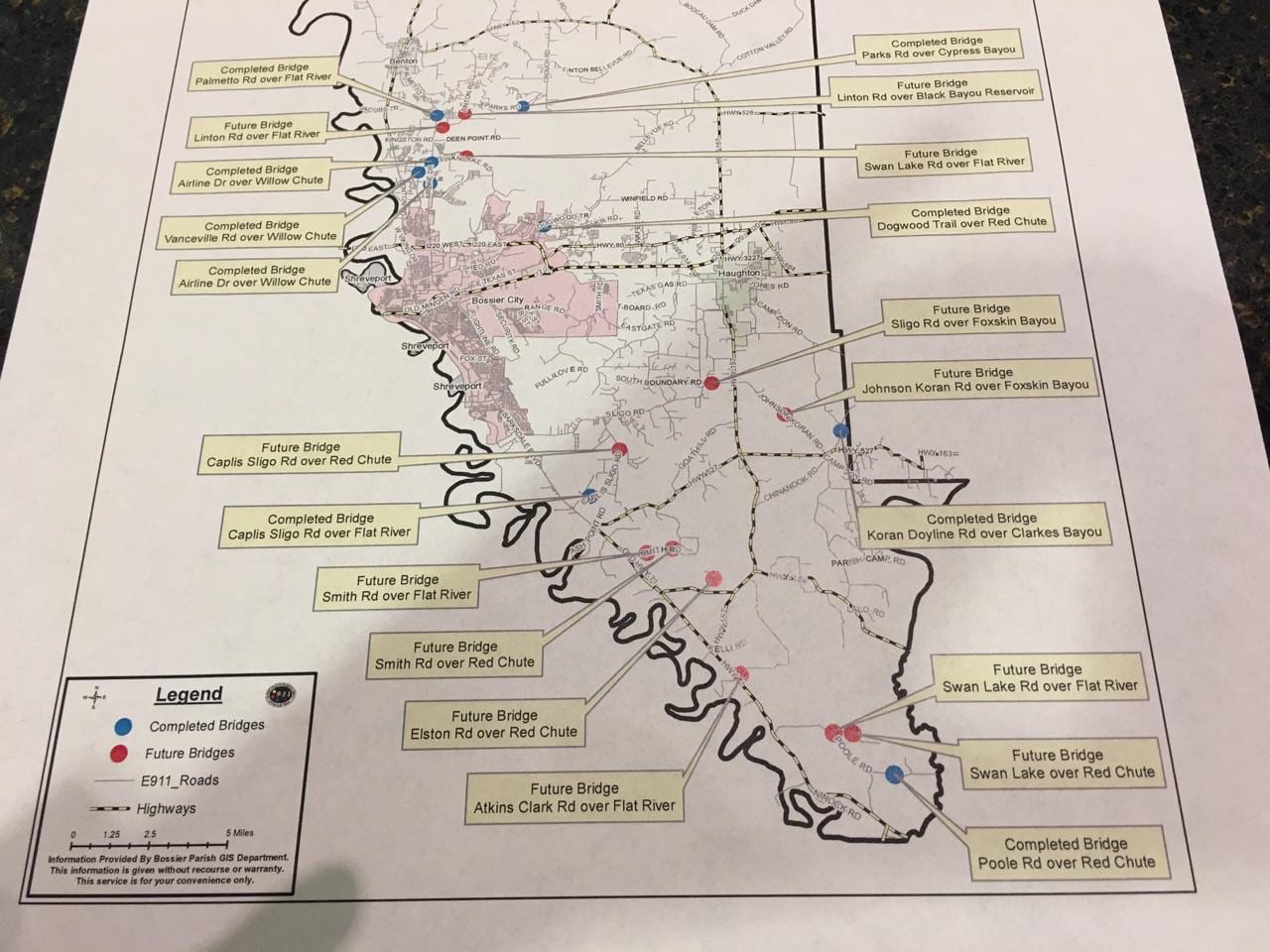 Bossier Parish is facing replacement of 21 bridges with a $20 million price tag.

Bossier Parish Engineer Butch Ford told the Police Jury at its Dec. 19 meeting that the parish doesn’t have the money to fix them.

”You’ve got a bridge that’s 30 years old, you can go in there and put a Band-Aid on it and replace the stuff on top. But the stuff underneath you’re not replacing deteriorates. You can spend money to repair a bridge when you can use that same money to pay for a new bridge, so it doesn’t make fiscal sense,” Ford said.

Residents who drive through the Elston Road Bridge and Swan Lake Road Bridge over Red Chute Bayou were present at the meeting to ask the jury that those bridges be repaired and reopened.

They said the detours around the bridges are too hard on private vehicles and not accessible by emergency first responders.

“We just want an option where we can access and leave the property without going down a road where you’ve got a 50/50 chance of getting stuck,” Bossier Parish resident Rocky Cash said.

He noted that the Elston Road Bridge over Red Chute would cost $250,000 to repair, which could last five years. or more than $1 million to demolish and rebuild.

“We’re looking at a lot of bridges in Bossier Parish. We’re not going to tear the bridge down. Our target was to get a safe route for emergency vehicles on the property by getting right of way,” he explained.

He noted that there are “a lot” of bridges that need repairs and “it’s about money.”

“Right now, I know we don’t have the money to fix it. I don’t think anyone wants to see a bridge torn down and completely removed,” Benton concluded.

Ford originally brought the issue to the Jury’s attention at its Dec. 5 meeting when Louisiana Department of Transportation and Development inspectors advised that some bridges need to be closed altogether.

“Inspectors called us about some issues with some of our long bridges,” Ford previously told members of the Jury. “We have to determine how we deal with an issue where we have one house on the other side of a bayou and a bridge that’s going to cost more than a million dollars to rebuild.”

Parish Attorney Patrick Jackson said the Jury would need to consider the cost of repairs and upkeep versus the needs of the public impacted by closing a particular bridge.

“At some point we have to do a cost benefit analysis,” Jackson said. “We don’t have millions of dollars sitting in some fund to repair bridges that have no significant utility. Some thoroughfares need to remain open, but this jury has to make that determination.”

Ford said declining tax revenues have made it almost impossible for the parish to pay for replacement of the bridges. However, he will present a budget on bridge repairs to the Jury early next year.