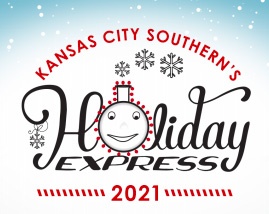 Kansas City Southern (KCS) (NYSE: KSU) announced today that it will celebrate the 21st anniversary of its KCS Holiday Express program and partnership with The Salvation Army with a fundraiser to benefit the Salvation Army in 21 communities on its U.S. rail network. Due to the ongoing pandemic, KCS will not operate its Holiday Express train, which traditionally draws large crowds in free, public events.

“KCS is pleased to celebrate 21 years of Holiday Express benefiting The Salvation Army in communities throughout our
U.S. rail network,” said KCS president and CEO Patrick J. Ottensmeyer. “While it’s still not safe to gather for visits with
Santa and tours through the train, the true stars of the show are The Salvation Army and the work it does all year round.”

“In this pandemic, the fastest increasing area of need is for families who will be unable to pay their rent or mortgages and face eviction. The donations The Salvation Army will receive through the KCS Holiday Express will keep families in their homes and keep hope marching on for them into 2022,” said Major Kelly Collins, divisional commander of The Salvation Army Kansas and Western Missouri Division.

Over 20 years, the charitable component of the KCS Holiday Express project has raised well over $2.6 million. Anyone
interested in making a tax-deductible contribution to the 2021 KCS Holiday Express fundraising campaign may do so at
https://donate.salarmymokan.org/KCSHolidayExpress2021.

The KCS Holiday Express was built on the tradition of the Santa Train, which ran on a segment of the network bought by
KCS in 1997. In 2000, a group of warm-hearted KCS employees noticed that the Santa Train was the only Christmas
some kids had, and that some kids did not have essential items like coats, hats and gloves, so they committed to
elevating the project. In 2001, volunteers transformed a retired freight train to the KCS Holiday Express experience that
thousands have enjoyed for 19 years.

In the first 19 years, the KCS Holiday Express train stopped in 20 or more communities in five or six states between
Thanksgiving and Christmas. At each stop, visitors could board the train, meet Santa and his elves and tour the inside of
three cars of the festive six-car train. These events did not take place in 2020 and will not take place in 2021 due to the
pandemic.

Headquartered in Kansas City, Mo., KCS is a transportation holding company that has railroad investments in the U.S.,
Mexico and Panama. Its primary U.S. holding is The Kansas City Southern Railway Company, serving the central and
south-central U.S. Its international holdings include Kansas City Southern de Mexico, S.A. de C.V., serving northeastern
and central Mexico and the port cities of Lázaro Cárdenas, Tampico and Veracruz, and a 50 percent interest in Panama
Canal Railway Company, providing ocean-to-ocean freight and passenger service along the Panama Canal. KCS’ North
American rail holdings and strategic alliances with other North American rail partners are primary components of a unique railway system, linking the commercial and industrial centers of the U.S., Mexico and Canada.

Rotary Club of Bossier City Names 2021-2022 Board of Directors

Rotary Club of Bossier City Names 2021-2022 Board of Directors